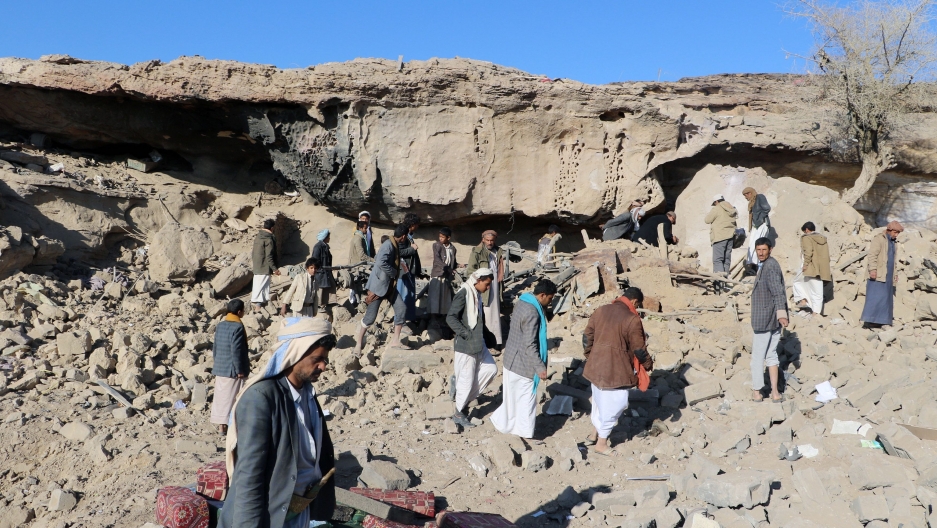 People gather at the site of an airstrike near the northwestern city Saada, Yemen, Dec. 3, 2017.

The United Nations is trying to evacuate at least 140 aid workers from the Yemeni capital amid fighting that has cut off the airport road but is awaiting approval from the Saudi-led coalition, UN and other aid officials said on Sunday.

Coalition aircraft bombed Houthi positions in Sanaa overnight, residents and local media said, aiming to shore up supporters of former Yemeni president Ali Abdullah Saleh as they battle the Houthi group, which is aligned with Iran.

It was the fourth day of clashes in which dozens have been killed, the Red Cross said.

"There is a plane on standby in Djibouti for 140 international staff," a UN official in Sanaa told Reuters. About half were from nongovernmental organizations, he said.

"Fighting is moving toward the airport and the situation is very tense. We can't even evacuate staff," he said.

United Nations staff have been confined to their living quarters in Sanaa since clashes erupted on Thursday, he said.

Shells were falling near the UN compound in Sanaa on Siteen Street on Sunday, with one source on the scene saying stray bullets had hit the compound. The compound is empty as staff had been told to stay at home and not report to work.

Another aid worker with an independent agency in Yemen, who declined to be identified, said the UN was planning to evacuate as many as 180 UN and other aid workers, but UN officials considered the airport road was not safe enough.

Russell Geekie, a UN humanitarian spokesman in New York, said the UN planned to reduce the number of nonessential staff in Sanaa, but they could not yet safely move, and exact numbers were unclear due to the fluidity of the situation.

"We’re very concerned by the clashes in Sanaa city, which have reportedly resulted in civilian deaths and have negative implications for the humanitarian response," Geekie said in an email response to Reuters.

"At present, fighting is restricting movement within the city, including on the airport road. The airport remains closed with Sanaa residents holed up in their homes."

Clearance to land at Sanaa airport has yet to be received from the coalition, who control the skies over the Houthi-controlled capital, aid workers said.

Saleh said on Saturday he was ready to turn a "new page" in ties with the coalition fighting in Yemen if it stopped attacks on Yemeni citizens, in a move that could pave the way to end nearly three years of war.

The apparent shift in position came as Saleh's supporters battled Houthi fighters in Hadda, a district in southern Sanaa where members of Saleh's family, including his nephew Tareq, live.

In Geneva, spokeswoman Elodie Schindler of the International Committee of the Red Cross said: "In light of the current chaotic situation, the ICRC is looking to downsize staff presence in Yemen to a core team."