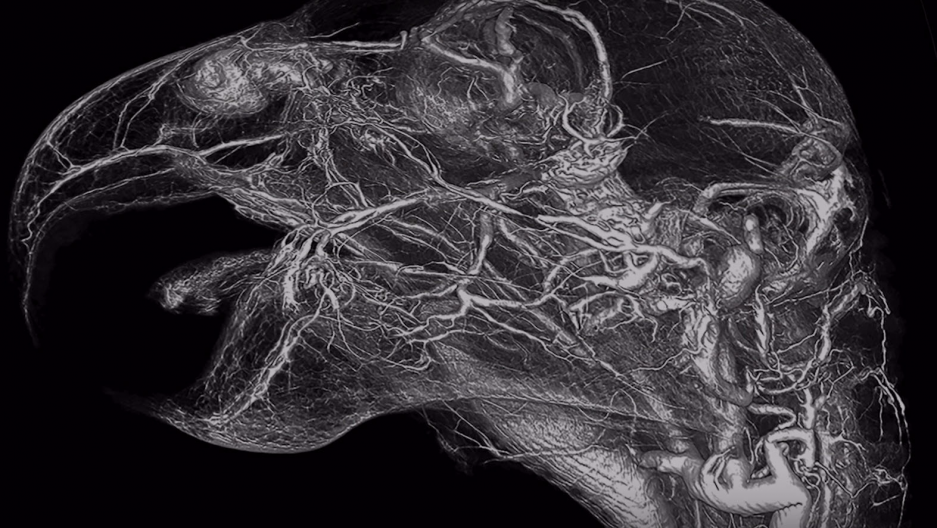 Once relegated to paper, images of vascular systems are moving to three-dimensional, comprehensive models.

Modern medicine has reached amazing heights, but even in our own basic anatomy, there are secrets we haven’t quite cracked. For one, as bird veterinarian M. Scott Echols explains, doctors have only a rough idea of where all our veins and capillaries are — and that map is just as vague in animals.

“When you have someone who is a specialist, like a hand surgeon, and they tell you, ‘I don't actually know where those blood vessels are, I know the big ones' … that kind of makes me concerned,” he says. “It reminds me kind of a hunt-and-peck mission where you go where you think you know things are, but you're not quite sure.”

There are already products on the market that can make veins “pop” in CT scans, for example. But Echols says when he tried some of the compounds in his own research, he found they weren’t always dense enough to show up well in images. What’s more, they were expensive, and many — not designed for use in living animals — were highly toxic: After a mishap with one product in his lab, Echols learned it was a noxious mix of lead, mercury and cadmium. “And I thought, surely we can do better than this,” he says.

Echols began experimenting in his own kitchen with nontoxic ingredients. After “a lot of trial and error,” he developed a powder that can be mixed with water and dyed with food coloring. (On his company’s website, the compound — called BriteVu — is described as being a “blend of barium and food-grade ingredients.”)

“Then we mix it up hot and then we inject it into the vascular system of the animals, and as it cools, it solidifies,” he explains. “And then once it's solidified within the body, it allows us to get 3-D images using CT technology, so we're able to scan the animal — or individual organs, if we like.”

BriteVu replaces the blood in veins and can’t be used in living animals. But the images it enables are stunningly lifelike — delicate portraits of an animal’s entire vascular system, down to the tiniest capillaries. Echols’ work is the subject of Science Friday’s newest Macroscope video, “Beauty Beyond Skin Deep.”

“It's literally like going on a discovery mission every day because depending on the level you want to go down to, you see new things,” Echols says of the scans. “And it takes you back to those old anatomy and histology books. You know, going to veterinary school we learned about all these structures, and you see these images and you think, ‘That's interesting, how did they even guess what this was?’”

“Well, the reality is, those images don't quite match up with what we're seeing,” he adds. “So, this has the potential to really rewrite that information and help people understand in three dimensions what these structures look like.”

You can get a firsthand look at the amazing vasculature of parrots, turtles and even humans in the new video. Or, download the scans to explore yourself at sciencefriday.com/blood.