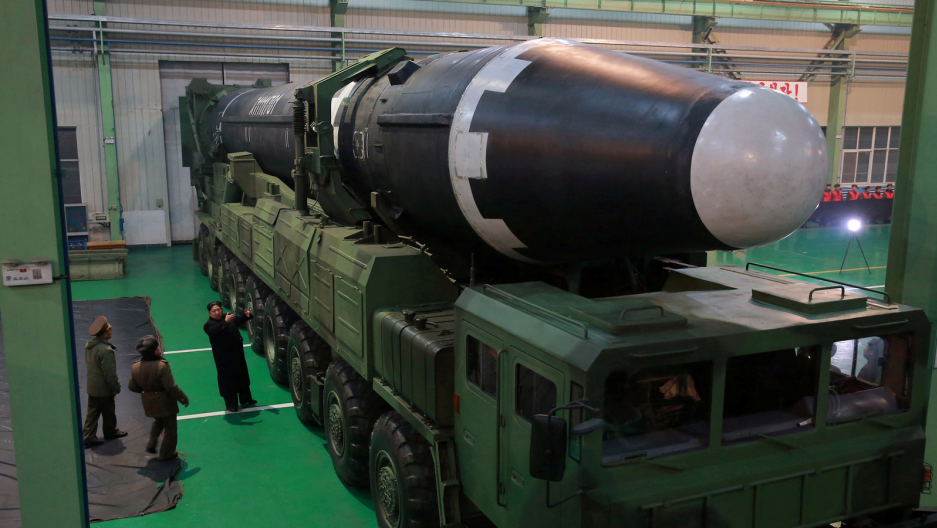 After testing a missile that North Korea said was capable of striking the US, Pyongyang claimed it had become a full nuclear power, though analysts remain skeptical.

Following are the steps necessary to build and deliver a nuclear weapon:

The key ingredient in a nuclear bomb is enriched uranium — or plutonium, which can be obtained through the combustion of uranium.

Uranium is a relatively common mineral, found both in the ground and under the sea.

Natural uranium is composed of uranium-238, which makes up 99.3 percent, and uranium-235, the remaining 0.7 percent. Only uranium-235, called "fissile uranium," can be used for nuclear fuel.

Enrichment refers to the process of increasing the proportion of U-235 in order to obtain enough fuel to make a nuclear bomb.

In one process, uranium ore is crushed and ground before being irrigated, or leached, with sulphuric acid. In another, groundwater and oxygen are injected into the rock to extract the uranium.

After drying, the result is a concentrated solid known as "yellowcake." This is transformed into uranium hexafluoride (UF6 or "hex"), which is in turn heated into a gaseous state to prepare it for enrichment.

The most common process for separating U-238 from U-235 involves the use of a series of centrifuges that spin the uranium at ultra-high speeds. U-238, which is heavier, falls away as the uranium moves from one centrifuge to the next.

Thousands of centrifuges are needed to obtain a sufficient volume of enriched uranium. Only a handful of countries have such installations, which are vast and costly.

With low concentrations of U-235 — 3.5 to 5 percent — the fuel can be used to power a nuclear energy plant.

But a concentration of some 90 percent — termed weapons-grade — is needed for the critical mass to set off the chain reaction leading to a nuclear explosion.

There is currently enough plutonium and enriched uranium in the world to build the equivalent of 20,000 bombs like the one used on Hiroshima in 1945, according to the International Panel on Fissile Materials, an expert group.

The explosive power of an A-bomb, or atomic bomb, is achieved by splitting the nucleus of an atom. When the neutrons, or neutral particles, of the atom's nucleus split, some hit the nuclei of nearby atoms, splitting them as well, causing a highly explosive chain reaction.

In an A-bomb using plutonium, its core of pure plutonium is surrounded by conventional chemical explosives, which are detonated in an "implosion" that splits the plutonium atoms.

The H-bomb — known as a hydrogen or thermonuclear bomb — is about 1,000 times more powerful than the A-bomb. Its principle is nuclear fusion, the same reaction that powers the sun.

An A-bomb is used to set off the H-bomb, in which isotopes of hydrogen combine, or fuse, under extremely high temperatures to form helium in a minute amount of time.

The A-bomb that the US warplane Enola Gay dropped on Hiroshima on Aug. 6, 1945, was the equivalent of 15,000 kilos of TNT, while an H-bomb packs the energy of several million kilos of TNT.

Only two A-bombs have been used militarily: the Hiroshima bomb and the one dropped by the US on Nagasaki three days later. No H-bomb has yet been used except in tests.

Challenges of ballistics and miniaturization

Three delivery methods are possible for nuclear bombs: by plane, from the ground or from a submarine.

Delivering a bomb aboard a missile rather than simply dropping it from the air entails mastering both ballistics — all the calculations involved in getting the warhead to its target — and the miniaturization of the nuclear charge so that it can be mounted on the warhead.

An intercontinental ballistic missile (ICBM) requires a guidance and stability control system to direct it thousands of miles accurately without breaking apart.

Miniaturization entails making the bomb compact enough to fit on a warhead but robust enough to survive the flight.

The miniaturized bomb occupies only a tiny part of the missile, which mainly contains the fuel necessary for its firing and propulsion.