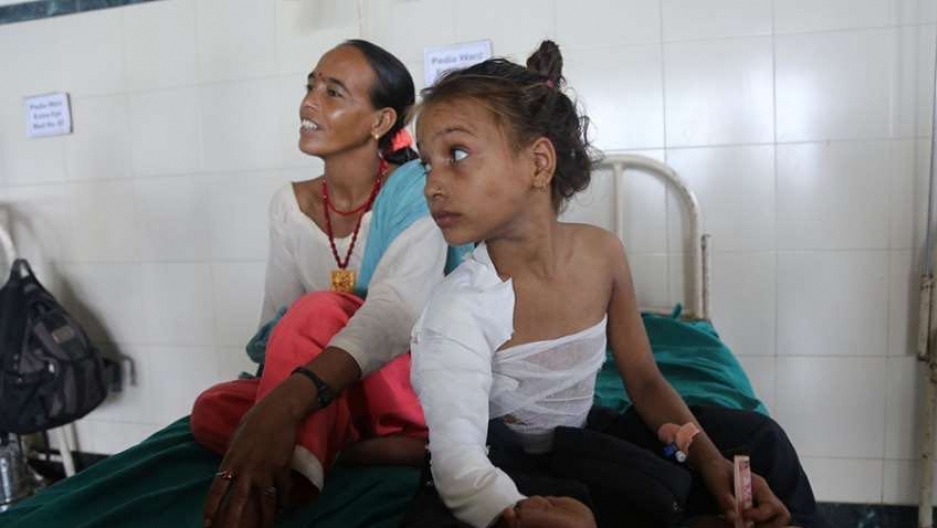 Anita Neupane is pictured following surgery in Nepalgunj on a contracture that goes from her right shoulder to her waist, which prevents her from lifting her arm.

That’s the answer you’ll get from most health care providers in rich and poor countries alike. But in poor countries, there’s little or no funding for burn prevention research and not much scientific literature to suggest what works. Successful prevention requires overcoming the cultural resistance to change anywhere in the world, and that’s one of the most challenging tasks in public health.

In Nepal, Padma Maharjan is doing her best to prevent burns. Maharjan works at the Nepal Cleft and Burn Center near Kathmandu. Most days she changes dressings on burn patients. From the central nursing station, she can see beds in all four directions holding children and adults who’ve suffered terrible deep burns from fires, hot liquids or electricity. Once a week, she goes out into the community and teaches burn prevention to students, community groups, women’s groups — anyone she can find who will listen.

Read parts one and two in this three-part series: Reconstructing hope: A surgeon's mission to help Nepal's burn patients and Unmeasured and unfunded: Lack of data hinders burn prevention and care.

“People never think burns will happen to them,” she says. Her job is to change their minds.

The first and the perhaps hardest step is getting them to listen. Maharjan’s first talks were to women’s groups, and invariably a good portion of her audience left before she was done. One day she brought in a woman who’d been badly burned. Her audience was riveted. 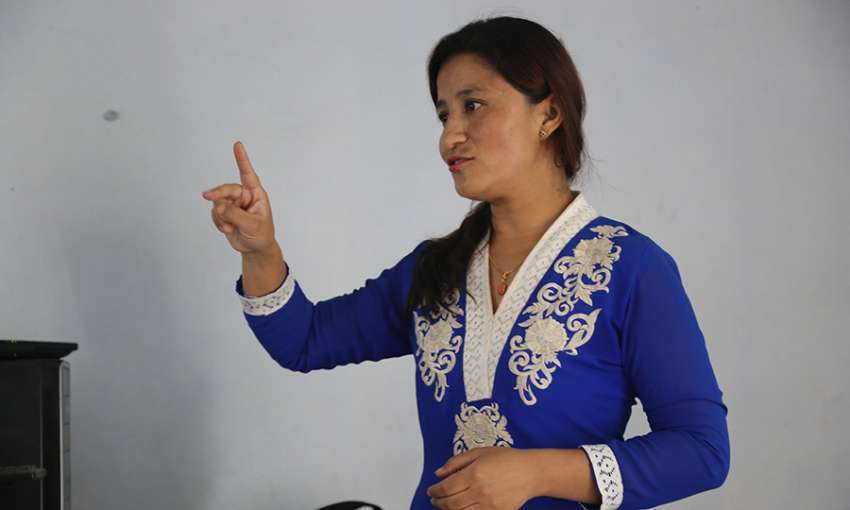 So, in mid-September, she goes to Mangal Higher Secondary School in a suburb of Kathmandu. She isn’t particularly worried about the students in a 10th-grade classroom. To an outsider, however, it looks bad. Her visit comes just days before Nepal’s biggest national holiday, and the rest of the school is enjoying Sports Day in the open-air courtyard. A very loud game of musical chairs is going on, and children are laughing and screaming over the music. In the classroom, 37 boys and girls are crowded on benches, struggling to stay still. The noise coming into the room through the open windows is deafening.

But Maharjan, cool and elegant in bright white leggings and a royal blue tunic, has her PowerPoint. And she feels confident she can gain their interest.

A comprehensive 2008 WHO report on burn prevention and care lists risk factors for burns: alcohol and smoking, open fires for heating, ground-level cookstoves, long loose-fitting clothing that can catch fire, high temperatures in hot water heaters, and substandard electrical wiring. In Nepal, most of those risk factors are the rule rather than the exception.

In low- and middle-income countries, prevention is hampered by the lack of basic data on burn incidence as well as lack of research infrastructure, the report said, and that’s especially frustrating because burns are so preventable. A landmark study in Harstad, Norway, begun in 1987, showed conclusively that prevention can work. A comprehensive program of public education, parental counseling, public service announcements, first aid training and encouraging local vendors to sell safe cookstoves brought hospital admissions for children with burns down 53 percent.

In a 2011 follow-up to the 2008 report, WHO analyzed the evidence base for prevention, and it was solid — for certain countries. Published studies supported the use of smoke alarms, hot water regulation and fire-retardant sleepwear. “Those are things that have worked in high-income countries, and which are not directly applicable in most low- and middle-income countries,” says Charles Mock, who worked on both reports when he was at WHO and who is now an injury expert at the University of Washington.

“When you look at rural areas and low- or middle-income places like India or Africa, very different things are causing burns,” he says. In Nepal, it’s not hot water heaters set at a too-high temperature. It’s cooking stoves on the floor in one-room homes. The 2011 report said there was only preliminary evidence for programs that promote safe stoves and lamps, prevent acid attacks and expand community education. But it did say that studies of the introduction of safe stoves in Guatemala and paraffin lamps in Sri Lanka had promising results, as did a public education program aimed at reducing acid attacks on women in Bangladesh.

Back in the classroom, Maharjan shows a slide of a burned hand to her fidgety audience. She tells them that burns are difficult to treat. Then she calls up an image of the blistered, badly burned back of a child and a photo of a little girl with a bright-red torso. Even the boys in the back row are quiet and attentive now. She talks about the risk factors that Nepalis face. She shows charts and statistics — 95 percent of burn victims are in low- and middle-income countries like Nepal. Each time the students’ minds start to wander, she shows a photo of a real person.

Is she making a difference? Maharjan can’t be sure. She hopes to do a study soon of the effectiveness of her education sessions. 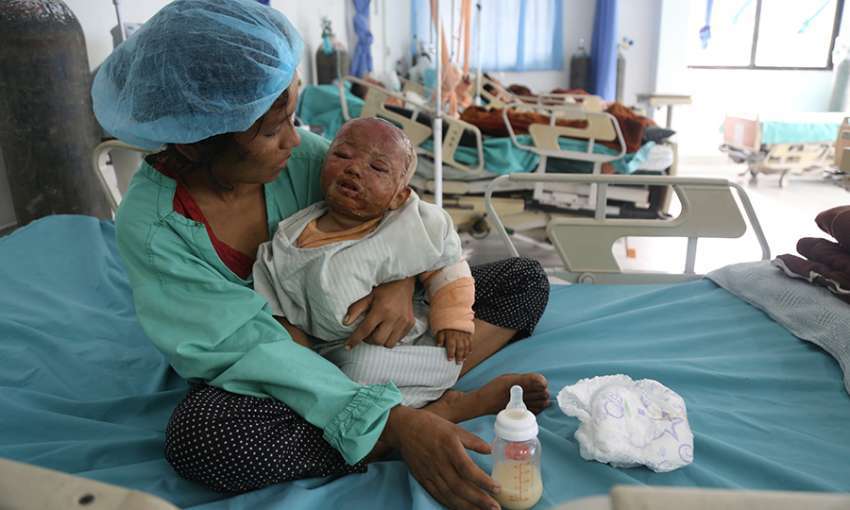 This baby boy, an only child, was playing with his grandmother and fell into a pot of boiling milk three days before the photo was taken.

Some of the best work on burn prevention comes from the Centre for Injury Prevention and Research in nearby Bangladesh. Saidur Rahman Mashreky and his colleagues found that 91 percent of burns in Bangladesh occur in the home, the highest incidence by far is among 1–4-year-olds. Mornings when their siblings are at school and their mothers are busy cooking and cleaning are especially dangerous. Mashreky and his colleagues came up with a solution: Inexpensive day care that keeps kids out of the homes in the mornings. Initial results look good, and the incidence of drowning has gone down as well. They’re now testing a scaled-up model.

They’ve also found that low, mud walls around the ground-level cooking fires are helpful. “Mud is free in Bangladesh,” says Mashreky. It’s a matter of convincing the men to build the walls, and that’s been going pretty well, he says.

You have to make people believe, he says. “People think injuries come from God,” he says, “so they need not do anything.” God will either protect or not protect.

“You need to spend a lot of time and resources to shift this perception,” Mashreky says. “They need to believe it’s preventable, that if I do this thing it can be avoided.” Prevention, he says, is a real challenge in low-income countries where people’s biggest concern may be whether they’ll have enough to eat. When I asked a handful of burn patients at Maharjan’s hospital whether they’d be moving their cookstoves from the floor or getting rid of kerosene lamps when they return home, they recognized the need, but most said they’ll just be more careful.

For Mashreky, finding money to support his work is the major challenge. Charles Mock takes it one step beyond that. “I’d say attention is even more important than money,” he says. The fatalism that Mashreky has noticed extends to officials in government and international agencies. “Some of them think that injuries are just due to bad luck,” Mock says, “and what can you do to prevent them?”

Burn injuries, like other injuries, can and should be addressed by science, Mock says. “You can develop effective strategies and you can document their effectiveness. We have yet to convince the public and the world that burns are preventable.”

Mock, Mashreky and others think the tide may be changing — albeit slowly. Mock notes that the advances made in road safety took three decades.

Mashreky thinks the key may be convincing government officials and NGOs that preventing burns could cost less than treating them. As soon as they understand, Mashreky says, they’ll invest. Advocates for burn prevention have joined with the clean-air cookstove movement to promote safe cooking, and the advocates are hoping that the growing interest in noncommunicable diseases may bring attention to injuries, including burns.

Back in the classroom in Nepal, the class is coming to an end. The students are all relatively well-off — only a handful live in homes where there are cooking or heating fires on the floor. None said they had fire extinguishers in their homes.

By the end of Maharjan’s presentation, each student said he or she would tell their parents to get fire extinguishers and the six with the cooking fires said they’d ask their parents to switch to safe stoves in safe places.