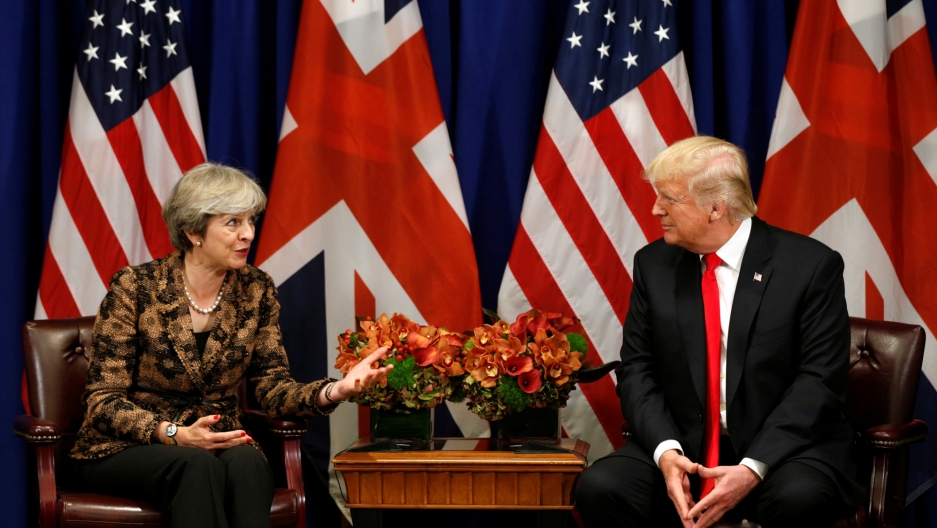 US President Donald Trump meets with British Prime Minister Theresa May in Sept. 2017.

Plunging headlong into a high-profile spat with one of America's closest partners, President Donald Trump suggested Prime Minister Theresa May focus on defending Britain rather than criticizing him after he retweeted anti-Muslim videos from a British far-right group.

"@Theresa_May, don't focus on me, focus on the destructive Radical Islamic Terrorism that is taking place within the United Kingdom. We are doing just fine!" Trump tweeted late Wednesday, after initially sending the same message to the wrong Theresa May.

May's spokesman had earlier condemned as "wrong" his decision to retweet the deputy leader of Britain First, and numerous Members of the British Parliament called for the government to cancel plans for Trump to make a state visit.

Called to make an emergency statement in the House of Commons on Thursday, Interior Minister Amber Rudd said Britain First was "an extremist organization" which used "hateful narratives" to stoke community tensions.

But while Trump had erred in promoting the group, she urged MPs to "look at the wider picture," saying the UK's close intelligence cooperation with the United States had "undoubtedly saved British lives."

May's spokesman also emphasised that the United States was "our closest, most trusted ally. We continue to work together on a huge range of very important issues."

However, he rejected criticism of May's record, saying that as prime minister and formerly interior minister — and after dealing with a string of terror attacks this year — she was "fully focused on dealing with extremism."

May was the first foreign leader to visit Trump following his inauguration in January, keen to encourage the much vaunted UK-US "special relationship," and offered him a state visit to Britain.

But the controversy over the invitation has only grown, with opposition led by London Mayor Sadiq Khan, who has himself been involved in a string of spats with Trump.

Khan said Thursday that it was "increasingly clear that any official visit at all from President Trump to Britain would not be welcomed."

He said Trump's actions were "a betrayal of the special relationship between our two countries."

May's spokesman said: "The offer of a state visit has been extended, it has been accepted and we will set out more details in due course."

Trump drew fierce condemnation at home and abroad for retweeting three incendiary anti-Muslim videos posted by Britain First's deputy leader Jayda Fransen, who has been convicted of a hate crime.

Local Government Minister Sajid Javid said Trump had "endorsed the views of a vile, hate-filled racist organization that hates me and people like me. He is wrong and I refuse to let it go and say nothing."

After Trump's rebuke, however, other ministers sought to play down the row.

"This is a president that behaves unlike any other in the nature of the tweets he puts out. I don't believe that should be able to undermine an overall important relationship with our country," Education Secretary Justine Greening said.

Trump's interventions in British politics have strained the trans-Atlantic relationship, particularly infuriating London with his tweets on terrorism in Britain.

Ann Coulter, a right-wing US commentator who is followed by Trump on Twitter and may have inspired his retweets, defended his latest outburst.

In a highly unusual step, the Dutch embassy in Washington criticized Trump over one of the videos falsely claiming to show a Muslim migrant beating up a Dutch boy on crutches.

"@realDonaldTrump Facts do matter. The perpetrator of the violent act in this video was born and raised in the Netherlands. He received and completed his sentence under Dutch law," it said.

Before Trump's latest missive, the White House had scrambled to limit the fallout, saying that even if the anti-Muslim videos were misleading, the president was pointing out a real problem.

"The threat is real, and that's what the president is talking about," said White House spokeswoman Sarah Sanders.

Britain First, a small group with no political representation, best known for aggressive picketing outside mosques, has hailed Trump for his support.