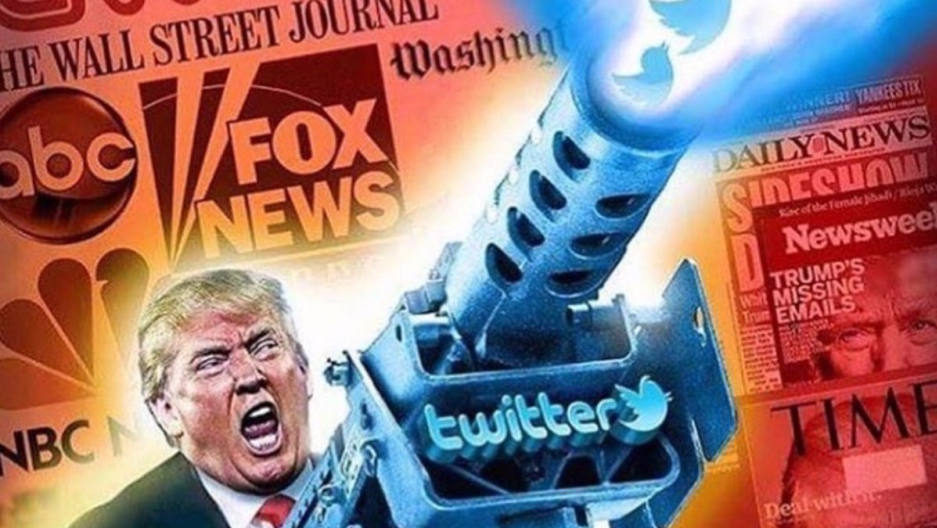 President Trump has tweeted controversial, inflammatory and false information for years. But since the 2016 campaign, there’s been another person behind @realDonaldTrump handle.

It seems that every morning the world waits for a new tweet notification from the president of the United States, but is it always Donald Trump hitting the send button?

These videos were especially inflammatory, and in some cases of questionable authenticity. One video claimed to show a Muslim migrant beating up a white Dutch teen on crutches. Turns out both the teens in the video were born in the Netherlands, and authorities won’t comment on their religions.

The president’s promotion of Britain First drew a swift reaction from the United Kingdom. Prime Minister Theresa May condemned the tweets, and the Archbishop of Canterbury issued an “urgent call” for the president to delete them.

White House Press Secretary Sarah Huckabee Sanders brushed off questions about the validity of the videos on Wednesday.

“The threat is real,” Sanders told reporters. “The threat needs to be addressed. The threat has to be talked about, and that’s what the president is doing in bringing that up."

President Trump has tweeted controversial, inflammatory and false information for years. But since the start of the 2016 campaign, there’s also been another person behind these tweets: Dan Scavino.

Scavino is the current White House social media director. He has done little to rein in the president's tweeting habits, and has added to the controversy in the past, according to Ashley Feinberg, senior reporter at HuffPost.

“Dan Scavino has actually been with Trump the longest of most of the people in his inner circle right now,” says Feinberg. “He started working for him in high school, actually — when he was 16, he was a caddy. Trump said he was going to offer him a job one day, and eventually had him head up his Westchester golf club. As Trump started running for president, Dan Scavino got on board and has just sort of been there the whole time.”

Scavino is currently “running every social media account Trump has,” Feinberg says, adding that the assistant to the president also creates videos and photo imagery for Trump feeds. For example, during the campaign, then-candidate Trump tweeted a picture of Hillary Clinton with a Star of David — a Jewish symbol — saying “worst candidate ever.” The Trump team back paddled after the tweet, saying the image was not meant to be anti-Semitic because it was a sheriff's star.

“That was definitely Dan,” says Feinberg. “They said it was Dan.”

On the whole, she says that it can be difficult to tell if it’s Trump or Scavino tweeting.

“Dan Scavino has essentially been able to mimic Trump exactly,” she says. “But the time of day is usually a good indicator [to decipher Trump’s tweets]. In the morning, Dan’s not at work yet, and Trump is sitting on his couch watching Fox News and tweeting himself, so those are usually him — when it’s before 10:00 a.m. or so. Late at night, too, the 10:30 tweets are usually Trump. But during the day, it’s more up for grabs.”

Scavino has also provided the president with content to tweet or retweet. According to Feinberg, the president’s phone does not have an internet browser, so he wouldn’t be able to search for images or videos off of the Twitter platform.

“Any time there’s a video attached to one of Trump’s own tweets, a picture attached, that’s always going to be Dan,” she says. “Dan Scavino’s big role right now is sort of checking in on the base and seeing what they’re tweeting, and what memes they’re tweeting out. He’s the one who sort of goes through the muck and finds these terrible images, and these videos of CNN getting beat up in Wrestlemania that are getting tweeted out. They’re coming from Dan, they’re coming from Reddit, they’re coming from these #MAGA Twitter accounts he follows.”

According to Feinberg, everyone in the White House wants the president to tweet less — everyone but Dan Scavino.

“He has always been very adamant that he wants Donald Trump to be Donald Trump,” she says. “He’s not creating the message, he is the messenger, in his eyes, of this sort of angry, vitriolic message that Trump wants to get out, and Dan sees Trump and his base as completely intertwined.”

While Trump’s tweets can be deeply offensive, they can also have real-world impacts. For example, Libya is challenging a CNN report that documented modern-day slave auctions within the country after President Trump called the network “fake news” on Twitter. (The Takeaway spoke with the CNN journalist behind the report earlier this month.)

“They have no regard for the actual lives that are being affected,” she says. “During the campaign, [the tweets] were upsetting or funny or annoying, but as much as they don’t want to hold import to what they say comes out of Trump’s tweets, these are words from the president. They show no sign of understanding the responsibility they have right now.”

Though outrage continues to mount, Feinberg says the public shouldn’t expect President Trump’s tweets to stop, or be tempered down.

“If anything, it seems to be getting more unhinged,” she says. “Referencing the ‘deep state’ is new for him, which he’s done a couple times over the last couple days. It’s definitely not going to slow down — if anything, we seem to be entering a more manic phase of this.”

A version of this story appeared on The Takeaway.