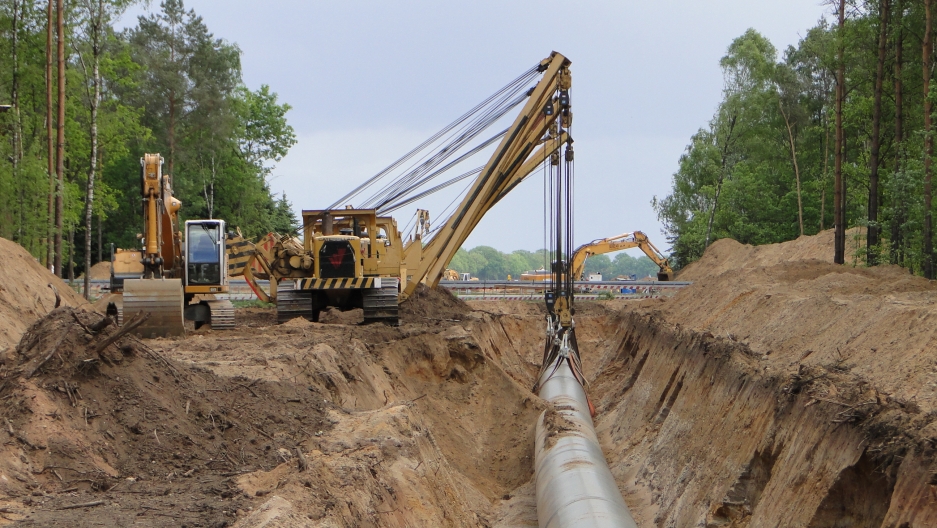 A proposed new natural gas pipeline for Alaska would be financed jointly by that state and China. It would run parallel to the Trans-Alaska oil pipeline, but below ground, like the gas pipeline in Germany pictured above.

President Donald Trump and Chinese President Xi Jinping have signed an agreement to build an 800-mile natural gas pipeline in Alaska, but economic hurdles could prevent its construction.

Ever since the Trans-Alaska Pipeline went into service in 1977, the industry has talked about constructing a parallel line to tap the region’s vast reserves of natural gas. President Trump has added to that talk by promoting a preliminary deal with China during his recent visit with President Xi. Alaska and China would split the $43 billion tab to finance and build the pipeline and terminals, and China would guarantee the purchase of the gas.

Alex Demarban, an oil and gas reporter for Alaska Dispatch News, says the state has for years wanted to ship natural gas to the lower 48 states, but the shale gas revolution put a stop to those plans. “Then,” he says, “it became a matter of looking at what other markets are out there. About six years ago, the state began looking at moving gas efficiently to Asia.”

The pipeline would run from the Prudhoe Bay oil fields on the Arctic Ocean, where the gas is now, follow the Trans-Alaska pipeline for much of its route and then connect to Cook Inlet in southern Alaska. There, in a little town called Nikiski, the gas would be turned into a liquid (which would require another costly construction project) and put onto tankers to be shipped overseas.

Alaska is currently in a recession, with the nation’s highest unemployment rate, so they “are desperate for a project,” Demarban says. “We've lost a lot of jobs, particularly high-paying jobs in the oil fields.” Alaska’s financial situation could imperil the project, however.

The state can’t currently afford its share of the construction costs and Demarban says most Alaskans would oppose tapping the Alaska Permanent Fund, which currently has about $63 billion, largely from oil revenues. “So, where does Alaska get the money? We're not quite sure,” he says. “That's why we need big partners for this project.”

A firm commitment isn’t expected from either the state or the Chinese until late in 2018. Demarban guesses the project has less than a 50 percent chance of going ahead. China can choose from a number of liquefied natural gas projects around the world and the Alaska proposal, he says, is a “high-cost project, with uncertainty about the price of gas once the project starts moving [it].”

“On the plus side,” he notes, “we are close to China, relative to other LNG projects and can really reduce shipping costs. We've got a huge amount of gas that, once someone swallows that pill up front and agrees to invest, can move for decades. But still, I would think less than 50 percent.”