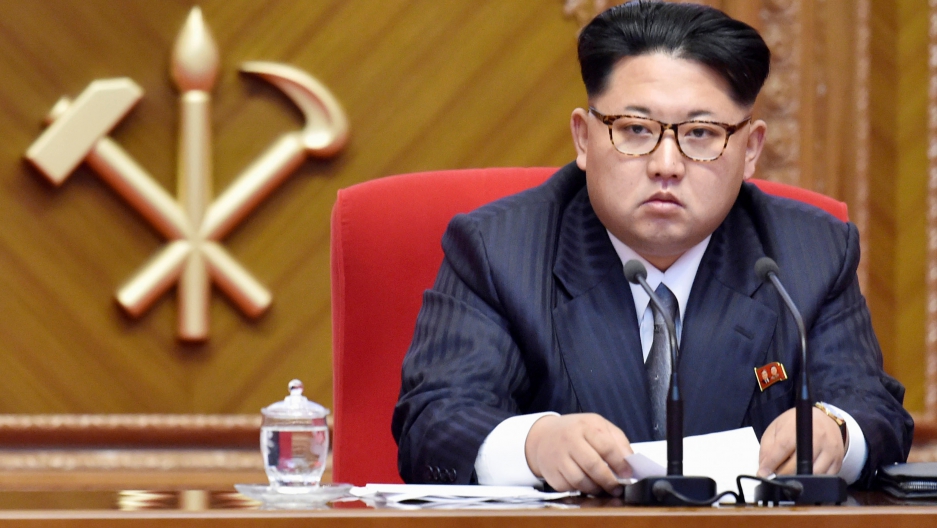 North Korean leader Kim Jong-un attends the first congress of the country's ruling Workers' Party in 36 years, in Pyongyang, North Korea on May 9, 2016.

On Friday, Dec. 1, America Abroad and The Takeaway will hold a town hall event at the United States Institute of Peace in Washington, DC.

You are invited to attend this live radio show taping (RSVP here). If you can't make it in person, check back here Friday for a live stream of the event. Ahead of the talks, America Abroad interviewed Frank Aum, USIP's senior North Korea expert, about the tense state of affairs between the two countries.

How would you describe the current situation in North Korea? How worried should Americans be?

The crisis between the United States and North Korea is as grave as it has been since the early 1990s, when President Bill Clinton contemplated bombing North Korea’s nuclear facility at Yongbyon. The two sides have irreconcilable positions: North Korea is determined to achieve a reliable long-range nuclear missile capability and the United States is determined to prevent that from happening. The zero-sum framing and singular emphasis on maximalist goals suggest a very worrisome trajectory.

North Korea’s last step in demonstrating a nuclear deterrent capability is conducting a long-range missile test with a live nuclear warhead, which experts believe North Korea can achieve within the year. For some in the United States, there is a sense that almost all diplomatic, financial, and military response measures have been exhausted, and that only extreme measures remain to bring North Korea to the negotiating table, such as limited military strikes, robust secondary sanctions against China, or a comprehensive embargo against North Korea.

How did it get this way? What's changed under the Trump Administration?

The North Korean regime is uniquely insecure and has chosen to buck the will of the international community and develop nuclear weapons as the ultimate guarantee of its safety. Kim Jong-un is unwilling to give up his nuclear weapons after seeing what happened to other governments that relinquished their weapons of mass destruction like Ukraine, Libya and Iraq. The US intelligence community also assesses that no amount of pressure will cause North Korea to denuclearize.

The last four US administrations all sought to achieve North Korea’s denuclearization using different strategies and all failed so it’s probably not helpful to assign blame. In fact, the Trump administration’s policy of “maximum pressure” is an intensified version of the approach that the Obama administration used during its second term – which is to collaborate with allies and partners to impose significant costs on North Korea and coerce it back to the path of denuclearization. The biggest difference is that previous administrations have all maintained restraint when dealing with North Korea while the current administration may decide that the time for restraint could be coming to an end.

Can you explain some of the various approaches to North Korea and some of the pros and cons of each?  What's the difference between Track 1 and Track 2 dialogues?

Track 1 refers to government-to-government dialogues, while Track 2 refers to non-governmental dialogues. When there’s a mix of both governmental and non-governmental participants, it’s called Track 1.5. In the absence of Track 1 dialogue, which is currently the case, Track 2 dialogues can help to maintain communication and prevent misunderstandings between the two sides.

According to Madeleine Albright, “diplomacy is the art of persuading other countries to act as we would wish.” When practicing this art, engagement and pressure are both necessary and complementary tools. But these tools are not always effective, especially in the case of outliers like North Korea. The regime can withstand significant amounts of pressure since it is not accountable to its people, and it has not always acted in good faith during periods of diplomacy. In addition, it is difficult for the United States to be consistent in the application of a particular strategy given the turnover of administrations.

The United States has used Track 1 dialogues in the past to engage directly with the North Korean regime, applying a combination of incentives and disincentives to get it to denuclearize.  The Clinton administration tried this approach in the 1990s. In 1992, it approved high-level bilateral talks with North Korea and canceled the massive US-South Korea joint military exercise TEAM SPIRIT to persuade North Korea to ratify a nuclear safeguards agreement. The United States also negotiated a deal known as the 1994 Agreed Framework, which promised two light-water reactors and heavy fuel oil in exchange for North Korea shutting down its Yongbyon nuclear reactor. The Agreed Framework appeared to work at the time, and prevented North Korea from producing enough weapons-grade plutonium for over 50 nuclear weapons during the time that the deal was in place. However, the second Bush administration terminated the deal when it discovered North Korea developing a covert uranium enrichment program.

Another approach is to treat North Korea as a bad actor and coerce it to give up its nuclear weapons program using diplomatic isolation, financial sanctions, and military deterrence. The second Bush administration adopted this approach in the early 2000s, calling North Korea a part of an “axis of evil” and using evidence of North Korea’s covert uranium enrichment program to terminate the Agreed Framework. North Korea’s subsequent withdrawal from the Nuclear Non-Proliferation Treaty and internal disagreements within the Bush administration about the right policy approach contributed to another period of engagement from 2003-2008 known as the Six Party Talks. This multilateral approach achieved a deal similar to the Agreed Framework, but it also fell apart when North Korea wouldn’t agree to a verification protocol (procedures for verifying North Korea’s steps toward denuclearization).

The Obama administration seemed to try both approaches. During the first term, diplomatic engagement led to the so-called “Leap Day Deal” on February 29, 2012 — a moratorium on nuclear and missile tests in exchange for 240,000 tons of food aid – but this was quickly scuttled when North Korea conducted a satellite launch a few weeks later. During the second term, the administration adopted a global pressure campaign that sought to isolate North Korea diplomatically and cut off its access to the international financial system.

The current US strategy asserts that maximum pressure can either directly compel North Korea to recommit to denuclearization or indirectly get Beijing to apply more pressure on Pyongyang. The first part seems dubious, but the pressure on China, to President Trump’s credit, seems to be working. China has been more amenable to passing tougher UN Security Council resolutions, which have effectively banned 90 percent of North Korea’s exports, and taken stronger steps to enforce these resolutions, including ceasing joint ventures with North Korean entities, prohibiting the import of North Korea seafood, banning the use of North Korean labor and discontinuing Air China flights to Pyongyang. This pressure may not directly change the North Korean regime’s behavior, but it could cause internal unrest, which could indirectly influence the regime’s thinking.

What is the state of diplomacy with North Korea?  Is it still occurring despite the tweets?

Currently, the United States has no diplomatic relations with North Korea and there are no official talks with Pyongyang. However, the US government communicates with North Korea through what’s the called the “New York Channel” — the North Korean mission to the United Nations in New York. The US government has been probing the New York Channel for the possibility of denuclearization talks, but North Korea has been unwilling to engage on these terms. North Korea has expressed interest in the past in talking about a peace treaty as long as denuclearization was off the table, but this was a non-starter for the US side.

As long as denuclearization remains the singular focus in the short-term, I think formal diplomatic engagement will be very difficult. If we can start to think in terms of achievable, intermediate confidence building measures, in which both sides concede something of value to the other side, then there may be hope for reducing tensions and tackling more difficult goals. But it will be difficult to take intermediate steps from maximalist positions.

What role can actors beyond Trump and Kim play? Are other countries in Asia helping/hurting the tensions?

Other countries in the region have large roles to play, but their effectiveness — at least until recently — was limited because their approaches were not aligned. Japan and South Korea both support maximum pressure against North Korea, which is helping to hamper Pyongyang’s access to hard currency. However, Seoul believes that diplomacy is also necessary and has sought to engage in inter-Korean talks. So far, this hasn’t caused major rifts because South Korea hasn’t had the leverage to start talks. Seoul can’t offer financial or economic assistance, most of which is now prohibited by international sanctions, and Pyongyang views Washington, rather than Seoul, as the appropriate dialogue partner for security matters.

China has also increasingly endorsed United Nations Security Council measures aimed at punishing and containing North Korea, but it is concerned that too much pressure could cause war or instability on the Korean Peninsula. Beijing is worried that if pressure causes the North Korean government to collapse, a Pandora’s box of security threats will be unleashed, including refugees flooding across the borders, loose nuclear materials, and perhaps even US forces stationed closer to their borders.

To reduce tensions, China proposed a dual freeze — a suspension in North Korea’s nuclear and missile tests in exchange for a suspension of the US-South Korea joint military exercises — but neither the United States nor North Korea seem interested in this proposal at the moment. Washington doesn’t want to degrade its military readiness and views the proposal as an unfair trade because nuclear and missile tests are prohibited by international law while alliance exercises are routine and defensive. Pyongyang, on the other hand, seems hellbent on conducting tests fast enough to achieve its long-range nuclear capability as soon as possible.

Given each side’s unwillingness to engage in talks on the other side’s terms, I expect that the diplomatic stalemate will continue indefinitely. The lull in tensions will also continue until the next major provocative event. From the US perspective, this could be a North Korean nuclear test, a long-range missile test, or a missile test with an atmospheric detonation over international waters, all of which could happen sometime next year given the pace of demonstrations under Kim Jong-un. For North Korea, the annual joint US-South Korea military exercises in March and April are perceived as hostile actions and could elicit an escalatory response.

If you're in the DC area and would like to attend our event on Friday from 3-5 p.m. ET, please click here to register.