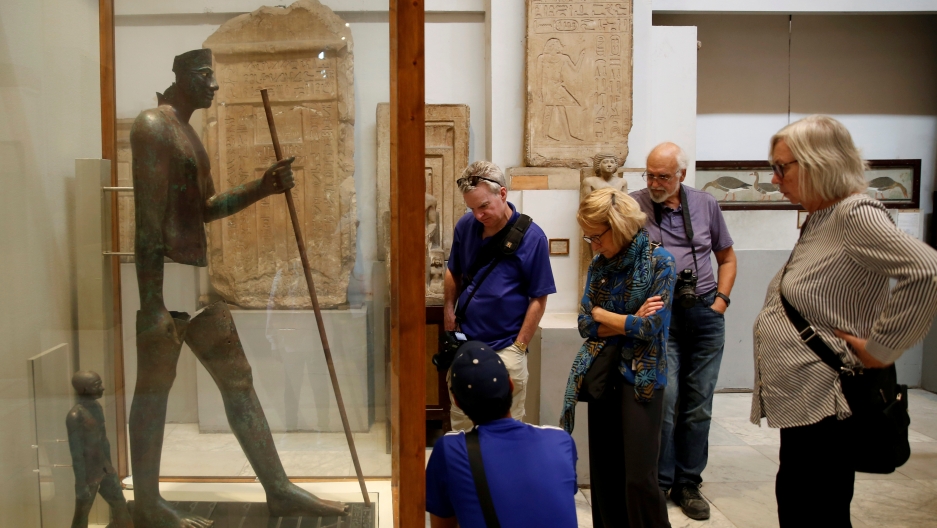 Visitors walk around pharaonic artefacts inside the Egyptian Museum in Cairo, Nov. 8, 2017.

It’s around midday in Cairo’s Khan el-Khalili bazaar and Ahmed Ashour is tending to two tourists who are trying out a range of Egyptian perfume oils that he sells in his shop. In the end they walk away without buying anything, but Ashour doesn’t look particularly concerned.

That’s because the day is still early for Ashour who doesn’t close the shop he runs with his brother until very late these days — past midnight.

Ashour has extended his opening hours to accommodate the extra customers, especially tourists, who walk through his large shop in search of rugs, local instruments, shisha pipes and various souvenirs to take home.

It wasn't always that way. “I would come here and close very early,” he said. There were “no customers, no business, anything.” But now Ashour gets about 20 customers a day, sometimes more. That might not seem like much, but it’s a big improvement compared to past years, when there were days without any sales. “It was very difficult."

Since the 2011 Arab Spring revolution, the tourism industry, so central to Egypt’s economy, has been devastated by years of political turmoil and a series of disasters, including the suspected bombing of a Russian plane over the Sinai peninsula in 2015.

But after years of hardship, it seems the fortunes of Egyptians like Ashour who rely on tourism for their livelihoods are finally turning around. Tourists appear to be coming back to Egypt’s plethora of attractions — from the Great Pyramids of Giza, to its ancient temples and tombs in the southern city of Luxor, its beaches and internationally renowned dive sites.

Between January and September, 5.9 million tourists visited Egypt, up from the 3.8 million who visited during the same period in 2016, according to figures from the Ministry of Tourism. The United Nations' World Tourism Organization, which ranked Egypt the second-fastest growing tourist destination of 2017, said Egypt is on course to welcome 8 million tourists by year's end.

That's still a far cry from what Egypt was used to before the revolution. In 2010 Egypt attracted 14.7 million visitors — the tourism sector employed more than 10 percent of the country’s workforce and it accounted for a tenth of the country’s GDP.

Egypt hasn’t fully recovered from the Russian charter jet crash two years ago that killed all 224 on board. The flight had departed from the Red Sea resort town of Sharm el-Sheikh and, after the attack, several European countries banned flights to the popular tourist town.

Most airlines have since resumed flight, but, much to the frustration of the Egyptian government who say they have tightened airport security procedures with the help of a British aviation security firm, British airlines are yet to do so.

There are other concerns for would-be visitors, too.

The Egyptian military has been fighting an Islamist insurgency in the northern Sinai since 2013. Since the end of last year, Egypt’s Christians have been targeted by ISIS in four deadly attacks on mainland Egypt. In October, a devastating ambush by militants outside Cairo killed at least 16 police officers and security officials. Last week, militants killed more than 305 in an attack on a mosque in the capital of North Sinai province, El-Arish.

That attack is the deadliest terror attack in Egypt's history and, though it's too early to tell what impact it will have on tourism, some in the tourist sector are concerned tourism might nose-dive again — like it did after the Russian plane crash.

But European countries traditionally deemed safe, like France, Germany and the UK, have also seen an increased number of terror attacks on their soil over the past two years. At the end of last year the US State Department even issued Christmas travel warnings for all of Europe — but none for Egypt.

Swedish tourist Emilie Eriksson, who was visiting the Khan el-Khalili bazaar earlier this month, said this may have contributed to changing in attitudes toward safety in Egypt among European tourists. “At least you’re aware that at least the attacks can happen anywhere,” she said, after admitting that she did still have some reservations about security in Egypt before she arrived.

Most recent incidients have happened away from tourist hotspots, insisted Luxor-based tour guide Ragab El-Motgalye. “Everyone can see the news, so they know,” he added.

Motgalye has seen an increasing number of tourists coming through since September, when Luxor’s peak tourist season starts. “The occupancy rate for Nile cruises between Luxor and Aswan are about 50 percent now. In previous years it had dropped to 5 to 7 percent, so this is a huge improvement,” he said.

The growing confidence in Egypt’s tourism sector is evident outside the country too.

Earlier this month, Hilton Worldwide’s vice president for North Africa, Mohab Ghali, told Reuters that Egypt’s hotel occupancy rates had risen this year by 20 to 25 percent on average. He said the American company, which manages 17 hotels in Egypt, planned to increase the number of hotel rooms it managed there by 40 percent by 2022.

And while the suspension of flights to Sharm el-Sheikh has impacted British and Russian tourism, Egypt’s tourism board has been promoting the Red Sea resorts of Hurghada and Marsa Alam as alternative destinations.

This strategy seems to be paying off. A spokesperson for Thomas Cook, the British tour operator, told PRI, “We’ve seen bookings to Egypt nearly double year on year as customers are attracted to the quality and value in resort. Following this demand we introduced Marsa Alam from winter 2017 as well as additional routes to Hurghada.”

The government has been providing incentives to tour operators like Thomas Cook and to airlines to bring in more tourists. It has also flown in celebrities, like Hollywood star Will Smith and soccer star Lionel Messi for photo-ops in front of the pyramids to help publicize the country.

The Egyptian government will see the tourism revival as a vindication of its economic policy. The cheaper Egyptian pound has helped bring in tourists looking for a low-cost destination.

Expectations are high in Egypt’s tourism sector and while they don’t expect tourist figures to return to the pre-2011 levels anytime soon, there is renewed optimism. “We’re expecting a double of tourists next season,” said Motgalye.

So long as last week's terror attack doesn't send tourists for the exits once more.