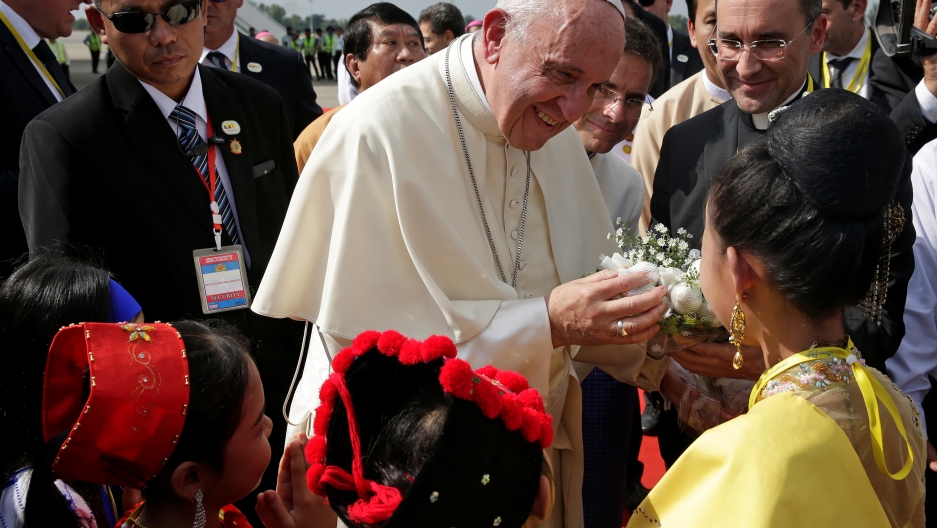 Pope Francis is welcomed as he arrives at Yangon International Airport, Myanmar, Nov. 27, 2017.

Pope Francis on Monday arrived in Yangon, Myanmar — the first stop of his six-day trip to Myanmar and neighboring Bangladesh.

The pontiff’s visit comes as Myanmar is being accused of violently pushing out hundreds of thousands of minority Rohingya Muslims. The United Nations and US Secretary of State Rex Tillerson have accused the country’s army, the Tatmadaw, of conducting a campaign of "ethnic cleansing" against the Rohingya.

As the pope embarked on his visit on Monday, many were waiting to see whether he would use the term, "Rohingya," to describe the group. The word is not used in Myanmar; there, the group is described as "Bengalis," suggesting they are from Bangladesh.

The pope has used the word, Rohingya, in previous speeches but has been advised by the church’s sole Catholic cardinal in Myanmar to forgo using the term, so as not to stir up violence in Buddhist-majority Myanmar, where Catholics make up approximately 1 percent of the total population.

Despite testimony by refugees pointing to a widespread campaign of rape, murder and arson, Myanmar denies any wrongdoing.

For more on the pope's visit, listen to an interview with The World correspondent, Jasmine Garsd, reporting from Bangladesh, by clicking the "play" button, above.