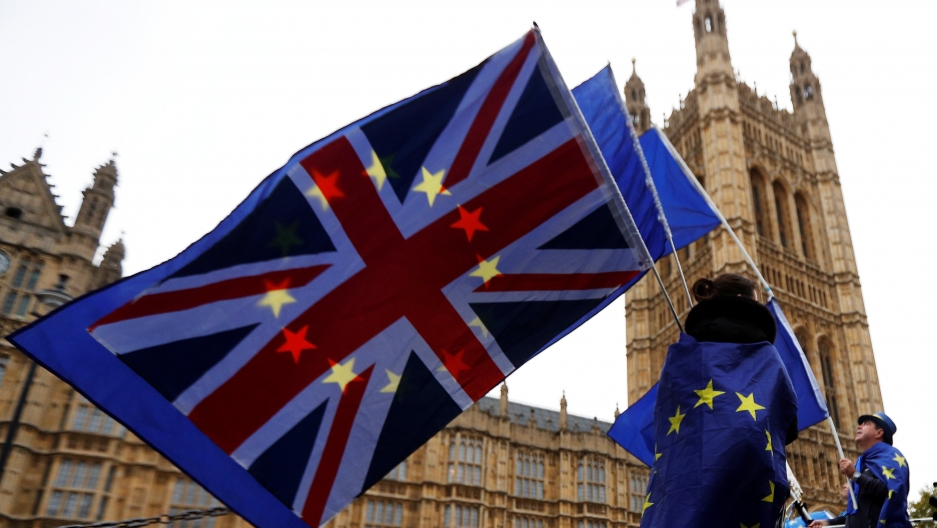 Anti-Brexit protesters wave EU and Union flags outside the Houses of Parliament in London, Britain, Nov. 14, 2017.

Ireland and Britain remained at odds on Monday on how to progress talks on the Irish border with a week to go before London could face failure in persuading European Union leaders to open trade talks at a December Brexit summit.

The EU handed Prime Minister Theresa May a 10-day "absolute deadline" on Friday to improve her divorce terms and meet three key conditions, including on the border between EU-member Ireland and Britain's province of Northern Ireland.

Before it can sign off on the first phase of talks, the Irish government wants Britain to spell out in writing how it intends to make good on its commitment that the 300-mile border will remain as seamless post-Brexit as it is today.

Dublin and EU officials say the best way to avoid a "hard border" is to keep regulations the same north and south and that this needs to be agreed in phase one, but a spokesman for May reiterated on Monday that a solution can only be concluded in the second phase of talks.

"We remain firmly committed to avoiding any physical infrastructure but the secretary of state (Brexit minister David Davis) was also clear that we will only be able to conclude them finally in the context of the future relationship," he told reporters.

May's spokesman repeated that the whole of the United Kingdom will leave the EU's single market and customs union but Irish Foreign Minister Simon Coveney said it seemed impossible to Dublin that some form of hard border could be avoided if there are diverging regulatory regimes north and south.

"It's simply not credible to say on the one hand that we are going to have a frictionless border and at the same time that all of Britain, including Northern Ireland, is going to leave the customs union, the single market without giving any reassurance on the avoidance of regulatory divergence," he told national broadcaster RTE.

With the possibility of Ireland vetoing progress on the talks dominating some newspaper front pages in Britain, Coveney added that Dublin would not need to use its veto if it remained dissatisfied since it has the backing of all other EU states.

"We don't need to use a veto because we have complete solidarity on this issue. It is clear to us that if there is not progress on the Irish border, we will not be moving onto phase two in December and that was reinforced to me as late as last Friday by very senior EU leaders," he said.