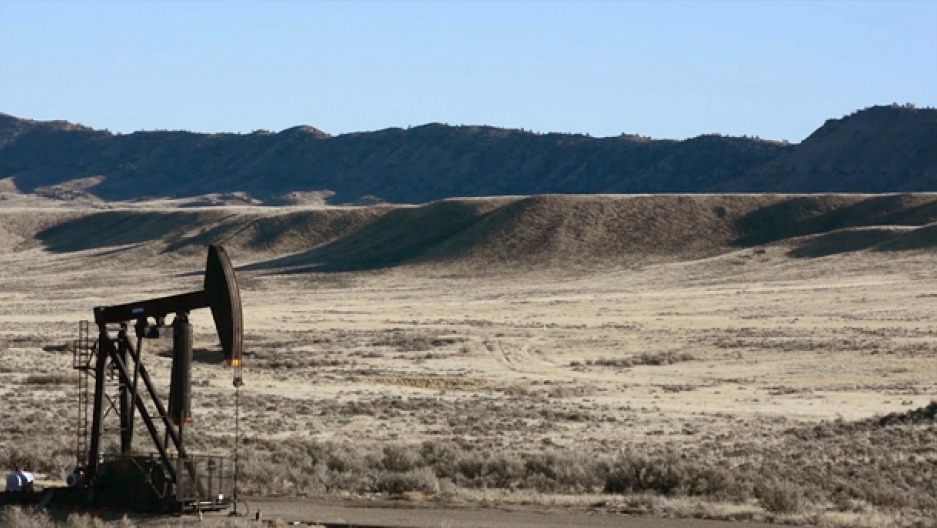 Oil production on US Department of the Interior land in Wyoming.

A leaked draft of the US Department of Interior’s four-year strategic plan calls for massive fossil fuel extraction from public lands, with no mention of climate change impacts.

The document was leaked to Adam Federman, a reporting fellow with the Investigative Fund at the Nation Institute.

“The heart of the blueprint ... is oil and gas drilling, and the speeding up of everything that goes into opening up public lands for development,” Federman explains. “It's also important to note that this is happening against the backdrop of an aggressive regulatory rollback.”

The strategic plan makes no mention of climate change or climate science. Federman finds this odd, considering that “the realities of climate change are really front and center for the Department of the Interior.”

“The department is made up of 10 agencies, including Fish and Wildlife, Bureau of Land Management and the US Geological Survey, all of which do extensive climate change research and manage some of the impacts of climate change,” Federman says.

Despite this, the department has begun aggressively undoing and obstructing the work of its own scientists on climate change. Joel Clement, one of the top climate scientists at the department, was one of many who was reassigned within the department in order to minimize their role. Clement was moved from his climate science position to an accounting post in the office that collects royalties from the fossil fuel industry. He has since resigned and become a whistleblower.

“[Clement] had raised the alarm about the impacts of climate change on Native communities in Alaska, where coastal erosion and rising sea levels are literally threatening people's livelihoods,” Federman explains. “So, that's something that the Department of Interior has to confront. The fact that this report omits any reference to climate change indicates that they're planning to, I guess, ignore it.”

The new strategic plan reveals just what the Trump administration means by “energy dominance,” Federman says. “It means they are essentially offering up anything and everything, onshore and offshore. We have upcoming lease sales in December in Utah, New Mexico and several other Western states in which they are just putting everything on the table. The BLM used to defer a lot of acreage when it was in areas that were considered sensitive, because of endangered species or critical habitat, and they seem to be not doing that at all anymore.”

Early signs, however, are that the fossil fuel industries seem reluctant to invest in new projects right now, given the relatively low price of oil and the “bleak outlook for the future of coal,” Federman points out. “One of the big moves of the administration and the department was to lift the moratorium on federal coal leasing ... but what we've seen since then is that many companies have actually withdrawn their lease applications for new mines on federal land,” Federman says. “Obviously, the price of oil is fluid and things could change very quickly.”

“One of the six mission areas, as they're called, is ‘Protecting our People on the Border,’” Federman explains. “It talks about how Department of Interior manages something like 40 percent of the southern border. … Department of Interior itself would be stepping up its partnership with law enforcement agencies and aggressively policing immigration and also drug smuggling.”