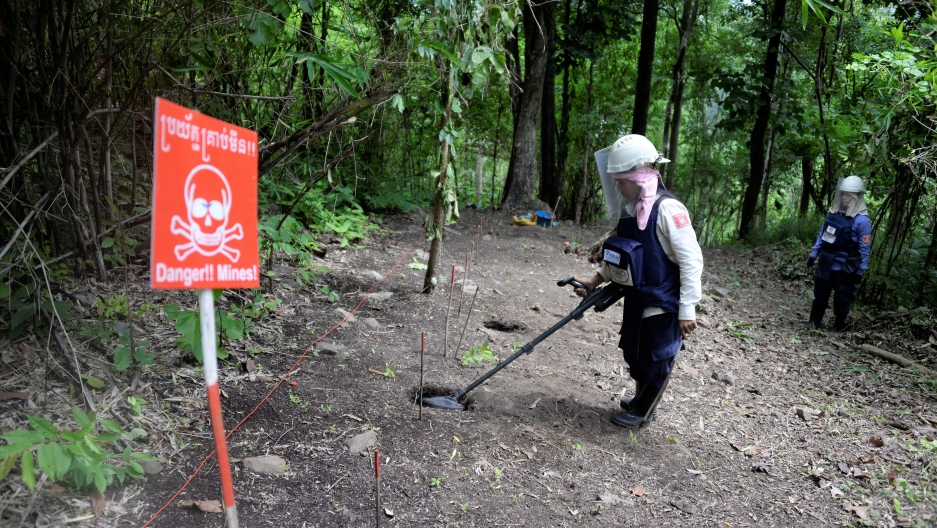 Sok Seng is shown looking for land mines to be cleared.

When Meas Seiha, a 42-year-old farmer, left his home on that cloudy day in 2016 to work on his fields in the Samlout village of Cambodia’s Battambang Province, he had no idea how his life would change.

“The accident happened one year ago when I was walking in the fields,” he recalled, gazing at his prosthetic leg while sitting on a bench outside a pagoda. Seiha, a father of three, walked into a land mine. He felt lucky to lose only one leg and not his life, unlike many other Cambodians. Yet, it irreversibly changed his and his family’s future.

“We were doing fine before the accident,” he said. “But I cannot work anymore, and my wife cannot manage all the farming work on her own.”

“Now, my three kids will grow up poor,” Seiha added.

Almost four decades after the end of the brutal Khmer Rouge regime, which had committed genocide on its own people and took 2.5 million lives, there are still 10 million land mines underneath the earth in Cambodia — making it one of the most heavily mined countries in the world. The land mines, which were placed by different governments throughout 30 years of war, are particularly prominent in the rural areas close to the Thai border, such as Seiha’s village in the Battambang Province.

Accidents like Seiha’s are not just isolated unfortunate events: Since 1979, land mines have taken more than 60,000 lives in Cambodia, a country of 15 million. Moreover, with more than 25,000 amputees like Seiha, the Southeast Asia nation has the highest ratio of mine amputees per capita in the world. Thus, in Seiha’s part of Cambodia, almost everyone has a relative who lost a life or a limb to a land mine accident. Sok Seng, a 26-year-old mine clearance team leader, is not an exception.

“My father was killed by a land mine. My older brother was badly injured by one, too,” she said, her voice unable to hide her continuing grief. “And they aren’t the only ones. My uncle had an accident and other relatives have been hurt, as well.”

The red patch sewn on the arm of Seng’s blue uniform featured a skull and read, "Mine Clearance." Running up and down the mine-infested hills in heavy protective gear under the sweltering sun, Seng occasionally wiped the sweat from her forehead with a towel. Listening to the mechanical sound of her land mine detector, she inspected the earth and instructed her colleagues. 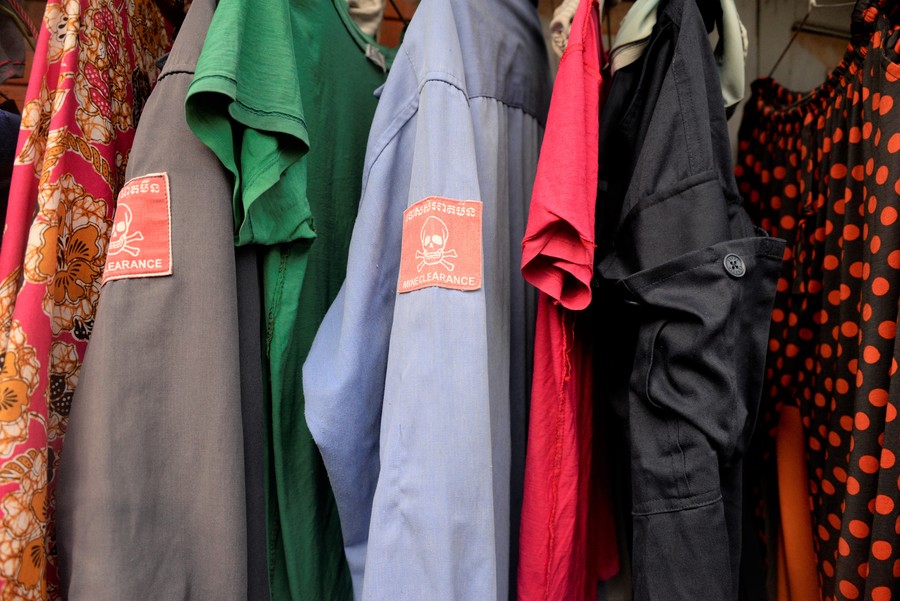 This is the laundry of deminers, hung in the common house they share.

As a child, Seng often helped injured and disabled relatives. Growing up without a father, seeing the legacy of war and grieving many losses gave Seng a mission.

“[This is] why I decided to be a deminer,” she said proudly, sitting on a rock during a lunch break in the minefield. “To stop this [from] happening to other people and to save lives.”

Seng started to work with The HALO Trust, the world’s largest humanitarian mine clearance organization, in 2010, in Battambang, and she proved to be a quick learner. She recently got promoted to team leader; she is training less experienced colleagues both male and female, as well as continuing the daily work in the minefields — detecting and removing the land mines.

“[As a woman] when I first started to work as a deminer, at first some people thought it was odd,” Seng said. However, throughout the years, Seng and her team, including many other women, were able to clean acres of land. When they handed back the mine-free lands to communities to farm, build schools and pagodas, she felt that her community understood women could do anything that men can — and more.

“We do exactly the same job as men when we are clearing the mines,” she added.

“Our demining efforts has better results when women lead,” explained Matthew Hovell, Cambodia country director of the HALO Trust, which has already helped to remove 50 percent of land mines in Cambodia that were laid around the Khmer Rouge era. He emphasized that many of the households in the area are women-headed.

“Many women who work as deminers start from the bottom and get promoted to leadership positions, where they have more complicated tasks like surveys and research,” he added. “It changes the way the community thinks about women and boosts their status.”

Many women like Seng find a new purpose and a strong identity in mine clearance work, as they risk their lives every day to make their surroundings livable again.

In Battambang and Cambodia’s other mine-ridden regions, cultivating the land is often challenging, if not downright impossible, as an economic activity. Research shows that in post-conflict zones, mine clearance is sometimes not only the only economic activity for many communities, but it is also a prerequisite for other economic activities to emerge.

Furthermore, although land mines might be indiscriminate about whose lives they take, it’s often women who take care of their disabled relatives. In the case of an amputation, women also tend to be more stigmatized and isolated.

Since land mine clearance is such a crucial aspect of peace building and socioeconomic development in post-conflict zones, it’s imperative that the mine clearance doesn’t exclude women, although it might traditionally sound like a “man’s job” to many, Hovell added.

“Land mines kill everyone, so removing them is not just a [man's] job,” said Kut Ya, a single mother of five in her 40s, who has been working as a deminer since 1995.

As the head of her house of nine including her children and three sisters, Ya has been providing for her family for more than two decades. All this time spent working under harsh sunlight hasn't been kind to her skin; it filled her face with bright red pigmentations.

“I am very happy and proud with my job,” she said. “People in my community respect me. We provide safe spaces and people can live without fear once we finish our job.” 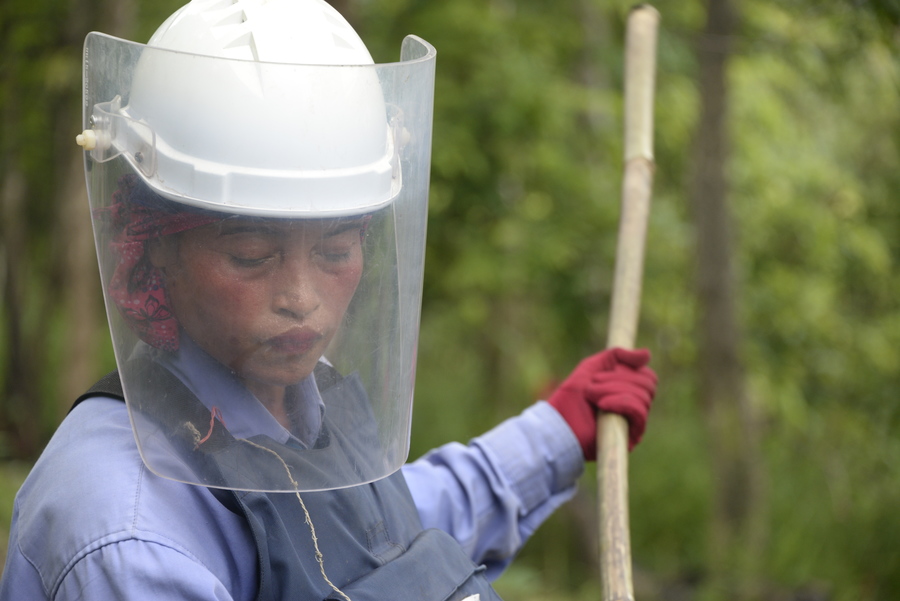 Kut Ya, a mother of five, at work, is shown clearing the land mines that devastated her community and took her mother's life when she was a kid. It's 37 degrees in Battambang and beads of sweat are running down her face. She worked as a deminer since 1995 and finds it to be a rewarding work to make such a hands-on difference. That said, with 10 million land mines still buried in the ground, the job is far from done.

Ya, herself, isn’t a stranger to the pain of losing a loved one to a land mine.

“My mother died because of a land mine when I was a child,” she said, her eyes on the ground. “My story was so sad, an Englishman wrote about me to a newspaper. Then a Spanish journalist came here just to see me — 30 million people in Europe read about me.”

Yet, she feels sad, as she believes that with many other emergencies and wars, the world had forgotten about the 10 million land mines that still devastate communities in Cambodia.

Like her colleagues and fellow villagers, Ya hopes to live to see a Cambodia free of land mines. “That’s the only way my daughters can get good jobs and good futures,” she said and added, “But I urge the world to not forget about us. Our job isn’t anywhere near done yet.”