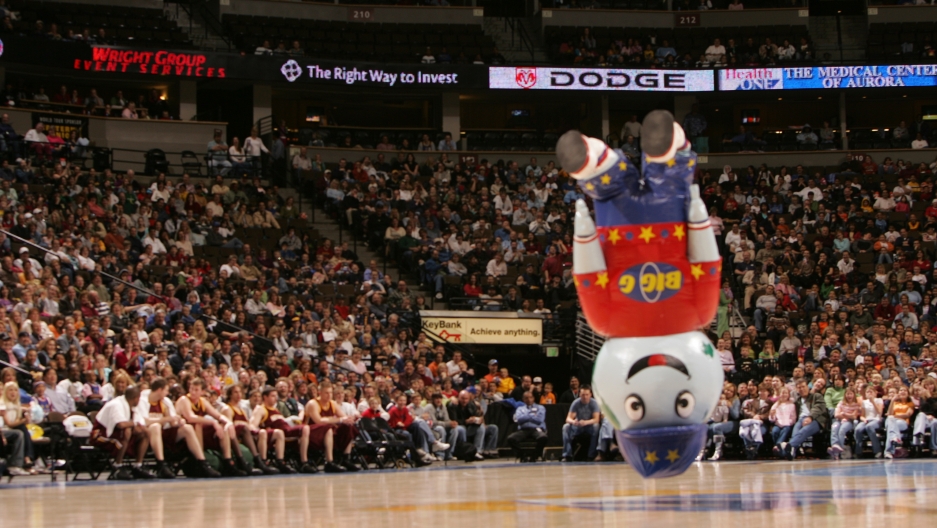 The company "Signs and Shapes" in Omaha builds inflatable mascots for professional sports teams, built to entertain and withstand a beating. "Globie" is the mascot for the Harlem Globetrotters.

I was recently at an NBA Toronto Raptors game. The game was a blowout, the Raptors were winning big and the fans were getting a little bored. Then, the team mascot, the Raptor, appeared.

This Raptor was a big, round, inflated dinosaur head on human legs, standing about six feet tall. The dinosaur shimmied, did summersaults, then climbed into the crowd and bounced end-over-end down the stairs to the delight of most everyone.

I tried to interview the Raptor, but the organization told me dinosaurs can’t speak. The mascot can Tweet and type, though. The Raptor sent me an email and said he gets outfitted from the company Signs & Shapes International, Inc. in Omaha, Nebraska. The Raptor added, “They are amazing and they are always willing to work on my crazy ideas!”

Signs & Shapes’ space in Omaha is just about the coolest factory you’ve ever seen — a huge warehouse filled with dogs, ducks and astronaut costumes being stitched, then inflated and tested.

“The company was started in my dad’s basement, my folks’ basement, just about 30 years ago, and we started as distributors for inflatable signs,” said Scott Bowen, the company’s co-owner.

Bowen flipped through a photobook showing me some of their overseas customers: a Chinese basketball team, an ad agency representing Thailand, a dentist’s office in Spain and a Swiss pizzeria.

“There’s an inflatable pizza slice running around some town in Switzerland, I guess,” Bowen said. 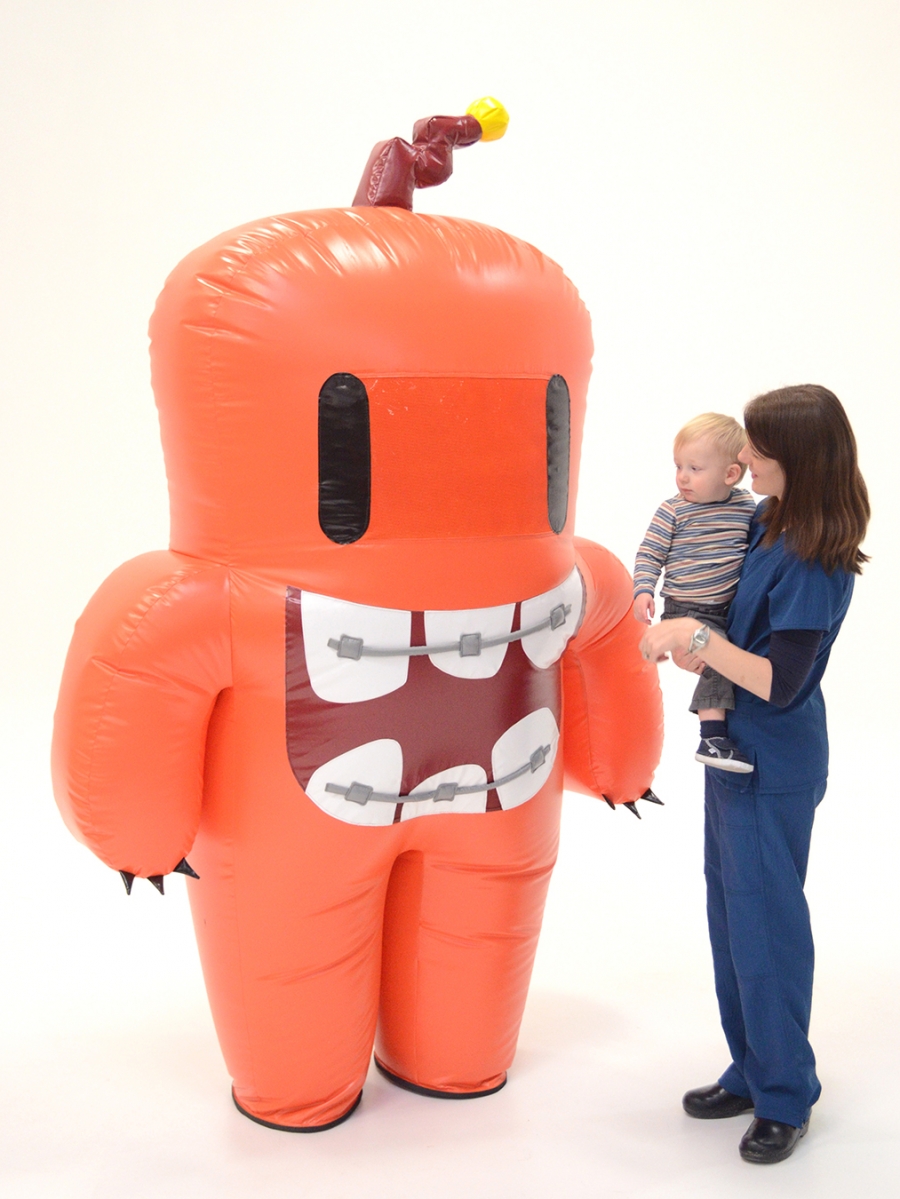 A mascot for a Spanish dental practice.

It’s a fun company. But what lessons can another small business learn about becoming a global exporter? Lee Bowen, Scott’s father, who helps run international sales, explained how they find their foreign customers: “Word of mouth. ... We don’t do any advertising.”

Signs & Shapes relies on reputation and having a niche. If you want a high-end inflatable that won’t pop when your mascot is bouncing on its head in front of 20,000 people, call Omaha.

This type of “passive” exporting among small business is pretty common.

“Maybe a customer came their way, in which case that’s fantastic, and then they meet that order,” said Josh Nichol-Caddy, an export consultant at the Nebraska Business Development Center.

Nichol-Caddy is trying to help small businesses in Nebraska go beyond this thinking, to fulfil a lot of international orders to even out their sales. Nichol-Caddy admits, though, navigating the export process can be daunting for a small business.

“When do you link in the bank? When do you talk to the logistics person to actually take the shipment off your hands? Might you need an export license for your product?” said Nichol-Caddy.

Scott Bowen has been at the export game for a while now and says the export process has become “quite easy” for his company. Business is going well, but still, Signs & Shapes only has 25 employees. And Bowen said they’re limited in how much they can grow.

“We need seamstresses with a really high level of sewing intelligence that can look at a pattern of a couple of hundreds of pieces that’s never been made before, and put the whole thing together accurately,” says Bowen. “But [they also must] have a business or commercial mentality in terms of speed.”

“Everybody in the industry complains that, in this country, it’s hard to find people who have those construction skills,” said Michael James, chair of the textiles, merchandising and fashion design department at the University of Nebraska-Lincoln.

His department has graduated students who now work for Signs & Shapes designing products.

James said textiles companies — and that’s what Signs & Shapes really is — could never compete with China and its seemingly endless supply of seamstresses who are paid a fraction of what people in the US make.

“A small manufacturer like Signs & Shapes can keep everything in house because they’re not doing huge volume,” said James. “If they ever got to that point where the demand was so big, they wouldn’t be able to find the production capacity here, in this country, at a cost that they could probably manage.”

And then there’s another issue facing Signs & Shapes. While letting the product speak for itself has become the company’s best marketing strategy, they can’t take credit for some of the coolest stuff they make due to non-disclosure agreements. It can be a highly secretive industry.

In a back room, airbrush artist Shane Perrin put the finishing touches on a mascot as Scott Bowen looked on.

“He’s had stuff on Broadway stages, the biggest amusement parks, huge international sporting events,” said Bowen, who can’t name many of the actual places or events where Perrin’s work has been on display.

Still, I asked Perrin if it was gratifying to see his work broadcast out to hundreds of millions of viewers.

When his work comes on screen, he keeps quiet among his friends. “But I can tell them, ‘Hey, that’s really neat, isn’t it?’ And then wink a lot, but that’s about it.”

So if you’re watching a Thansgiving Day parade Thursday and see a float that you really, really like, chances are a group of folks in Nebraska may have had a hand putting that together. Or not. 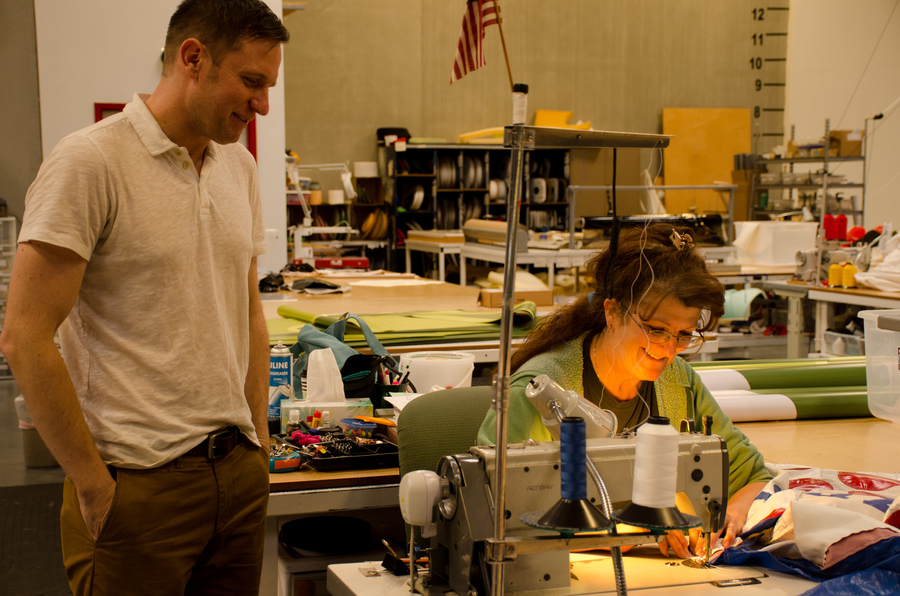