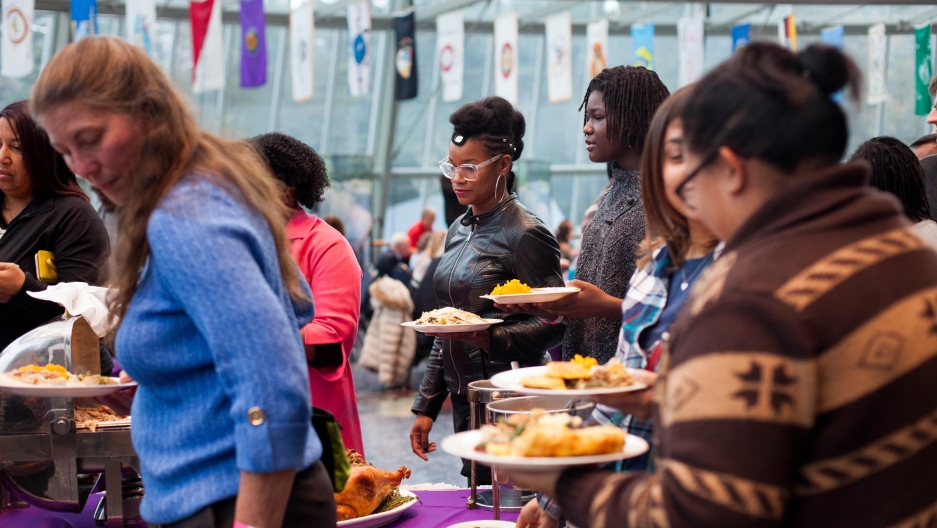 Roughly 220 guests came to the Mashantucket Pequot Museum for this year’s annual Thanksgiving Feast. It was the second time the event was both held and sold out.

The smell of seafood, fried breads and freshly baked pies filled chef Sherry Pocknett’s kitchen at the Mashantucket Pequot Museum in Connecticut on the Saturday before Thanksgiving as she prepared dinner for over 200 guests.

Through food, culture and community, the museum has begun hosting their annual Thanksgiving Feast, which has sold out for its second year in a row. The dinner is a chance for people to break bread together and hear a narrative that inspires critical thinking about Native life and legacy.

“Native people on the coast, we live by the season. Anything that is in season and indigenous is what we go after. Clams, sunchokes, quahogs, mussels, lobsters — all the seafood that you can get without struggling to get it,” said Pocknett, a member of the Mashpee Wampanoag Nation from Massachusetts, as she sliced pies. “We have a lot in store for these folks.”

For nearly 20 years, the Pequot Museum has been a place for education and experience where one can learn the history of local nations while engaging with issues that Native communities are facing today, such as land ownership and environmental issues like the Dakota Access Pipeline.

The feast began last year in an effort to combine education and entertainment. “Alongside providing excellent food, it is an opportunity to show how good locally sourced and native foods can be,” said Clifford Sebastian, a local member of the Pequot Nation who works for the museum. 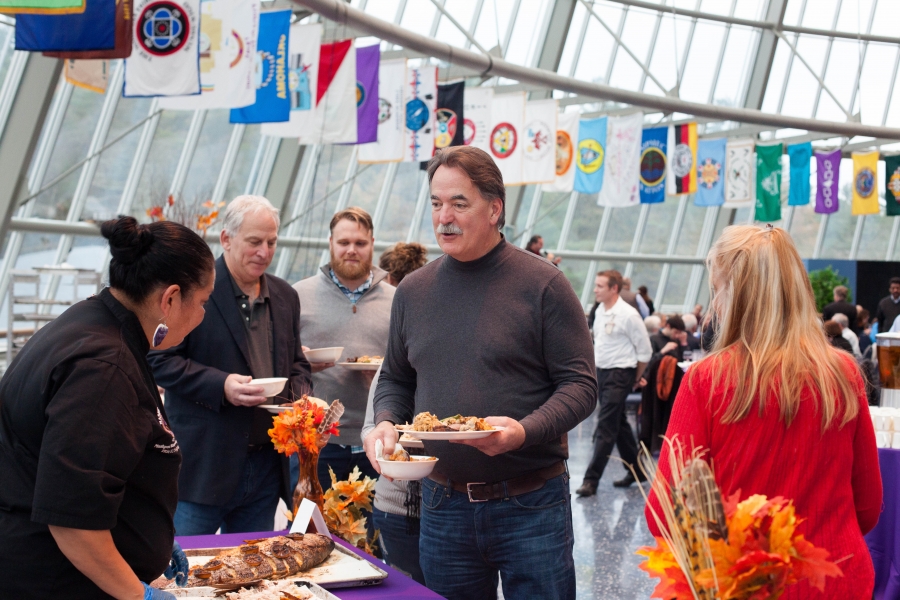 “Food sovereignty is becoming a very big push in the Indian country as far as people discovering new ways of self-determination,” explained Sebastian, referring to the right for peoples to produce their own food in sustainable methods and to determine their own agricultural systems. “Food on reservations provided by the federal government has always been very poor and almost always wheat-based — a lot of cheese, beef and pork — which are all things that were imported from Europe. A lot of times our bodies may not be able to process it as well as things native to the Americas.”

Chef Pocknett grew up in Mashpee, Massachusetts, in the 1960s. Both of her parents were Wampanoag and instilled in her a deep appreciation for local food, which has greatly influenced her cooking.

“[My parents] made us learn everything in case we had to survive on our own,” Pocknett said. “After the herring came, the bigger fish chase them, like the striped bass and then the bluefish, then the eels. Everything comes in a timely manner. Our first greens are fiddlehead ferns or wild onions or garlic.”

The food at the feast was plentiful. For soups there was quahog chowder, succotash and seafood stew. Fresh butternut squash fry bread was a favorite, as were the corn cakes with cranberry chutney. There was striped bluefish, venison and, of course, turkey. A variety of fresh, local vegetables added color as did the traditional three sisters: corns, beans and squash. 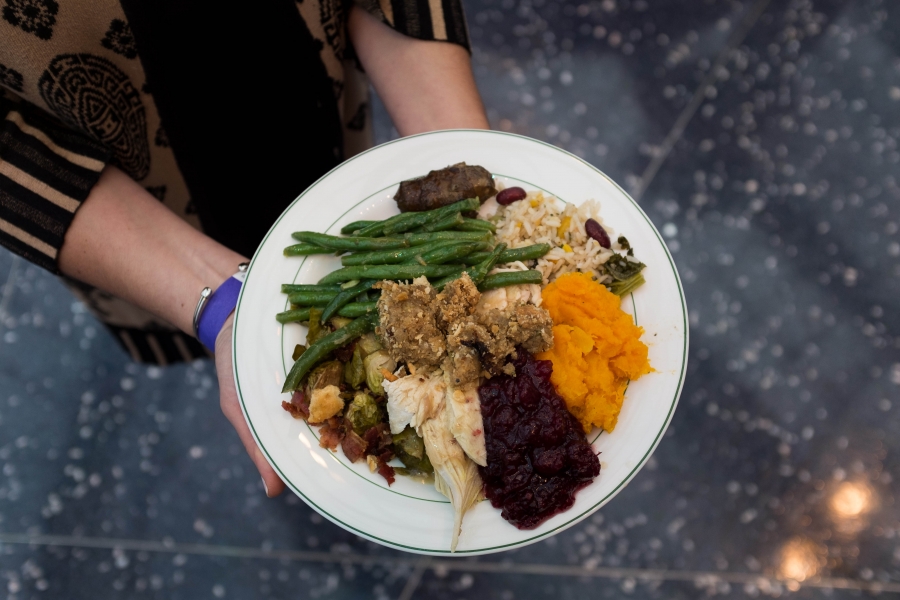 A guest of Thanksgiving Feast shows off the colors of her plate. All of the food served was made from indigenous and locally sourced ingredients.

“You can live off the three sisters,” said Newall, a member of the Passamaquoddy Nation and education supervisor of the Pequot Museum. “When you plant them together, it as if they are all related. That is where the symbology of them as three sisters comes in.”

These three crops are grown together in a style that is called complementary farming — which has been practiced by the Native population long before the Puritans began to import European goods to modern-day America. The corns, beans and squash, as well as other food crops, were planted and harvested by the women in Native communities.

The Pequot Museum offers students and adults alike a narrative of Native American life that goes deeper than just the Pilgrims and Indians. Their permanent exhibits take a visitor from the Ice Age to today’s tribal members and blend the natural history with that of the people.

It is a deeper and much more nuanced history than what is taught in schools. “It is usually just colonialism that we learn. They just tell us that it [the US] was colonized and that they forced the Indians out and they killed them and that is what it is,” said 13-year-old Lena Almouna-Marie Diakité from Narragansett, Rhode Island, who attended the event with her mom. Although she lives in Narragansett, a community with a Native name, local schools don’t teach stories of the local people.

“This is not a museum that teaches just Native history. This is a museum that is teaching Connecticut’s history. We are teaching America’s history here. It is just a different perspective,” said Newall. 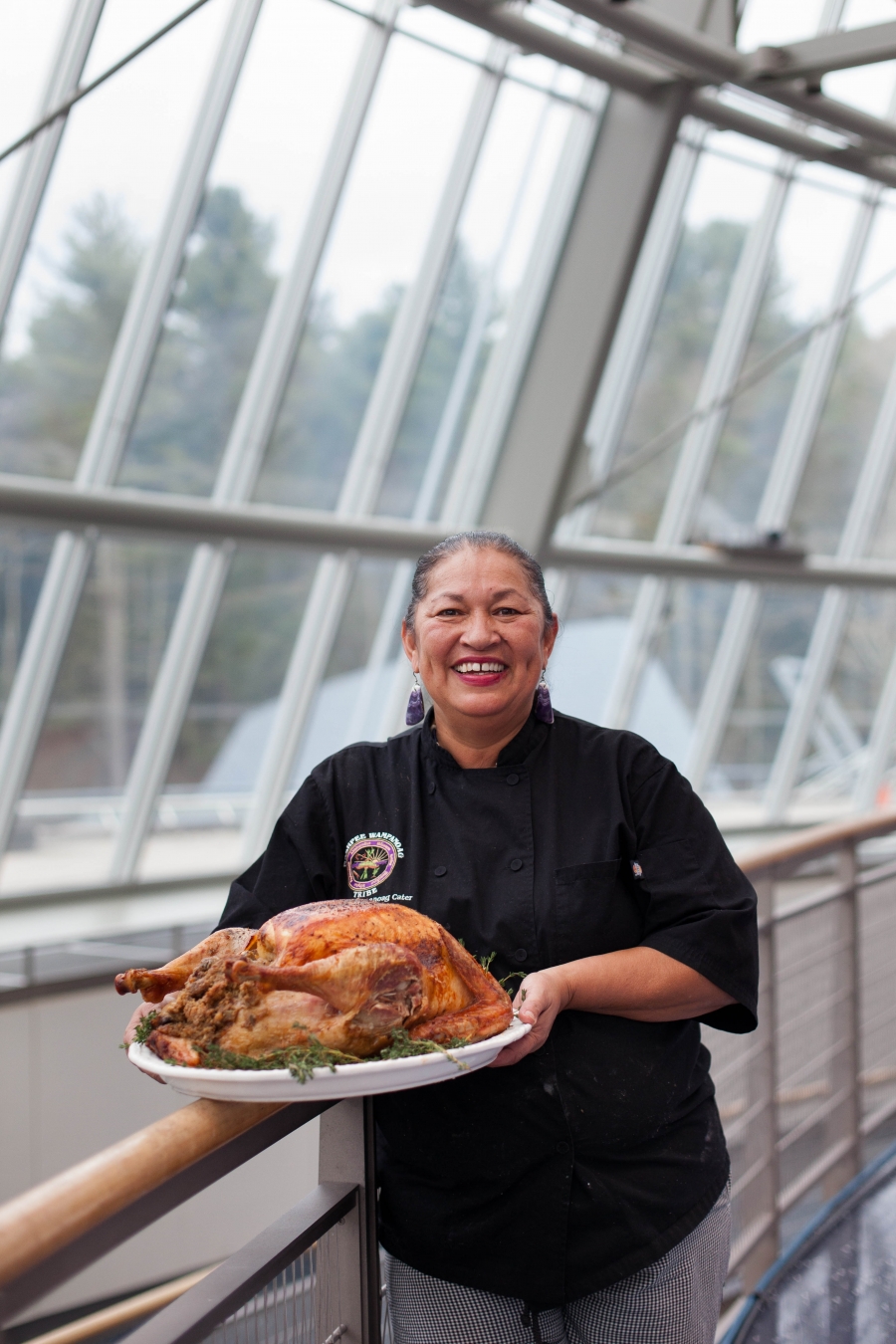 Chef Sherry Pocknett of the Mashpee Wampanoag Nation prepared the Feast for the second year in a row. “I enjoy welcoming you guys into my life, into the way I grew up, how we eat,” she said to crowd before dinner was served.

1 large bag or 2 bunches of washed and diced kale

1 can of whole kernel corn

Mix well, then add 6 cups of water or chicken broth.

Bring to a boil and then cook on low for 20 to 25 minutes until rice is done. Then add 2 cups of cooked wild rice and dry cranberries if you like.