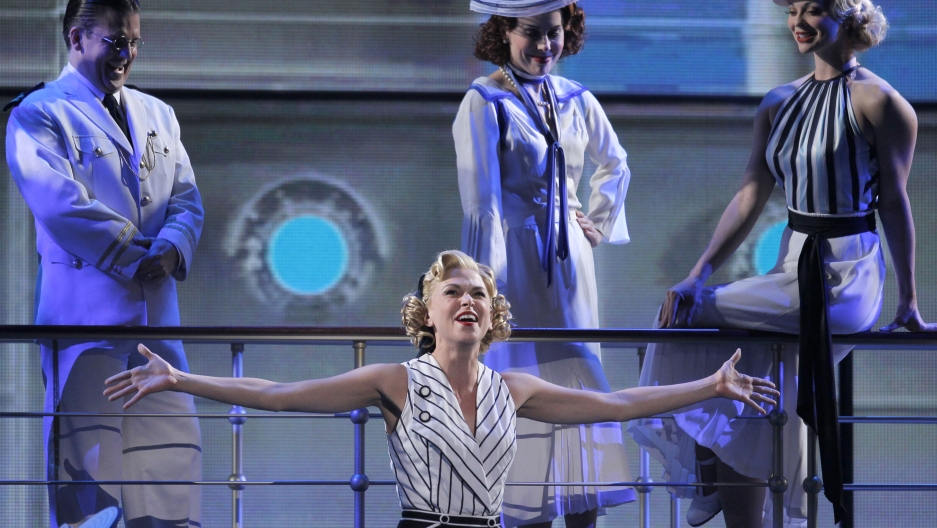 Sutton Foster performs with the cast of "Anything Goes" during the Tony Awards ceremony in New York, June 2011.

Before Broadway musicals got serious about West Side gangs or Fleet Street barbers, Cole Porter entertained audiences with frothy tales of socialites, gangsters, and nightclub singers. “Anything Goes” was his biggest hit, and while it's something of a period piece, the title song took on a life of its own, thanks to Frank Sinatra.

It celebrates liberation from social constraints—or what some would call a disgraceful slipping of standards. "We have something called the First Amendment that says that we can do most of what we want," says historian Laurence Maslon. "And yet there's this Puritan streak in America that says, you can't do that, that offends me."

Today Porter’s lyrics about short hemlines, women smoking, and four-letter words feel quaint. To capture the sense of danger and titillation the song had in 1934, Studio 360 presents an update for the age of sexting, bailouts, and fries with bacon. (lyrics by Joe Keenan; performed by Bryan Batt, accompanied by Jesse Reeks on piano)

Video: "Anything Goes" in the opening of Indiana Jones and the Temple of Doom

Video: Patty LuPone performs "Anything Goes" at the 1988 Tonys

Times have changed.
Porter’s ditty was once risqué
But if Porter could see today
And decorum’s complete decay,
He would say,
“Though the Thirties were hot as hell,
Everything that went then still goes ...
And a whole lot else as well!”

When gays can wed, and jaws aren’t dropping
When Barney and Ben go shopping for baby clothes,
Anything goes!

When dames as dim as Kim Kardashian
Triumph by acting trashy in tawdry shows,
Anything goes

The smut you can get today
On the 'net today,
Straight or gay today,
And all day today,
‘Cause burlesque today
Is on your desk today,
Where nobody can oppose.

When girls of ten are adolescing
And proving the point by dressing like tiny ho’s,
Anything goes!

When grandma’s face is pulled so tightly
She looks like a Keira Knightley whose eyes won’t close,
Anything goes!

When stars whose thoughts are far from clever
Are tweeting their fans whenever they blow their nose,
Anything goes.

When Cary Grants and Spencer Traceys
Have turned into Kevin Spaceys and Russell Crowes
Anything goes!

When fast food chains serve fries with bacon
To folks who could be mistaken for buffaloes
Anything goes.

When half the nation’s filled with rancor
From living in homes their banker will soon foreclose,
Anything goes.

Though banks are all crooks today
With cooked books today,
When they fail today
They get bailed today,
And those banks today
Are saying, “thanks!” today
As their bonus pool just grows.

When men of god who preach with thunder
Are looking for fun with underage romeos,
Anything goes!

Anything
— anything? —
Everything goes!