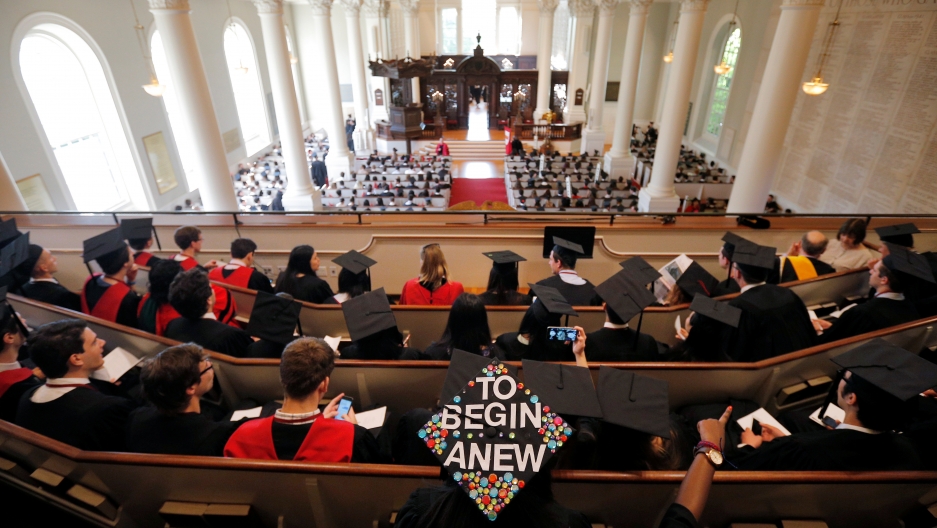 Graduating student Tiana Raphel has "To Begin Anew" written on her cap as she attends a service before the 365th Commencement Exercises at Harvard University in Cambridge, Massachusetts, May 26, 2016.

As an environment reporter for The World, I spend a lot of time reporting on climate change as an international policy issue.

I spend less time thinking and learning about what it would actually look like to live in a country that’s weaned itself largely off carbon. Would everyone drive electric cars? Would we all have to live closer to where we work? How much of our energy would have to come from solar and wind power? Will nuclear energy have a resurgence?

When I heard about an Excel spreadsheet that Harvard professor, Dan Schrag, uses to help his environmental science students model a low-carbon future for the US economy, it intrigued me. I liked the idea of working out our energy future in black and white.

“The idea is to take this grand problem and break it up into different sectors in which we actually use energy,” Schrag said as he introduced the spreadsheet to undergraduate students in his Harvard class, the Climate-Energy Challenge, in late October.

The spreadsheet, versions of which he’s used in classes for a decade, has a separate page for residential and commercial energy usage, transportation, industry and electricity generation.

Students fill in the spreadsheet with key numbers about America’s energy future, outlining how much energy comes from coal, oil, natural gas, biomass, renewables and even hydrogen. They can also dictate efficiency rates for home energy use, the percentage of cars running on electric engines and a host of other variables.

The assignment is to slash carbon emissions 83 percent by 2050, the Obama administration’s official goal, and justify their choices in a final paper.

“It’s very easy to fill out this spreadsheet,” Schrag told his students. “What’s hard to do is, do it in an intelligent way.”

About a week and a half into the exercise, Schrag’s students had turned in rough drafts of their spreadsheets and had already learned a key part of the lesson: The changes needed to drastically reduce emissions is a Herculean task and an economywide transformation that will take time.

“I don’t want to say it’s impossible to get to that level of reduction by 2050, but certainly it’s really hard,” said Beverly Ge, a sophomore from Florida with stickers of Marie Curie and other famous female scientists on her laptop.

Another key takeaway Schrag was aiming for: The more you can electrify things that use energy, like car engines and home heating systems, the more you can theoretically ditch oil and gas for greener forms of energy.

“It’s so much easier if it’s all one grid, [then] you can use whatever renewable energy to power that grid,” Ge said.

But quickly ramping up production of renewable energy to feed that demand poses problems of its own for the students to grapple with, including questions surrounding storage, delivery and even the manufacture of solar panels and wind turbines.

“Last year, we built 15 gigawatts of wind and solar in the US, which was a record,” Schrag said.

At that pace, the kinds of increases his students are talking about — calling for several hundred gigawatts of electricity to be produced by wind and solar each year — would take hundreds of years to build and install.

“You can accelerate that; we can build more factories,” Schrag said, “but realize that solving the climate challenge is the biggest construction project the world’s ever seen.”

Of course, wind and solar aren’t the only possible solutions to Schrag’s spreadsheet.

Some students push heavily on advanced nuclear power, envisioning a future where a new generation of nuclear reactors supplies much of the nation’s power. Others argue in their final papers that the key lies in capturing and storing carbon dioxide so it’s not released into the atmosphere, something that’s not yet possible on a large scale.

“There is no prescriptive recipe for doing well on this exercise,” Schrag said.

And he says in the real world, there’s no one mix of existing renewable energy sources, new technologies and energy efficiency fixes that experts agree is the best way to cut carbon emissions.

Schrag says it’s impossible to know what the most plausible energy solution is because new technologies will be key to cutting our carbon emissions. And there are too many open questions about which types of technologies — currently under development and not even yet conceived — will work out.

“Is there going to be a next-generation nuclear technology that’s going to be much safer and less expensive? We don’t know. Will battery prices go down enough so that storage of electricity from wind and solar becomes much more manageable? We don’t know,” Schrag said. “And until you answer those sorts of questions, you really can’t say what the right answer to this solution is.”

Schrag’s students are still working on their spreadsheets and learning as they go, about the kinds of infrastructure and policy changes that would be necessary to change how we use energy and where we get it.

After a few weeks of playing with the numbers, neither Beverly Ge nor her classmate Yuki Zbytovsky think the goal of cutting carbon 83 percent by 2050 is realistic.

“It would be an incredible feat,” Zbytovsky said.

“I tend to think that we won’t quite make it,” Ge said. “I want to be optimistic, but I tend to be more pragmatic since the election.”

Schrag warned his students about feelings of hopelessness when he first introduced the exercise in class.

“It’s not about pessimism; it’s about realism,” Schrag told them.

Being optimistic, he said, involves a value judgment about “whether we can climb the mountain we need to climb.”

“What we’re trying to do is first describe what the mountain is,” he said, “and then think about what we have to do to get over it.”

Schrag argues even powerful global decision-makers would benefit from an exercise in realism like this one.

Meanwhile, the students in his class have two weeks to finish their spreadsheets and chart their own version of a path over that mountain. When they leave Harvard, some of them plan to tackle the challenge of climate change in the real world.

And who knows? Maybe some of their ideas will leap off Schrag’s spreadsheet and turn into real policy solutions.