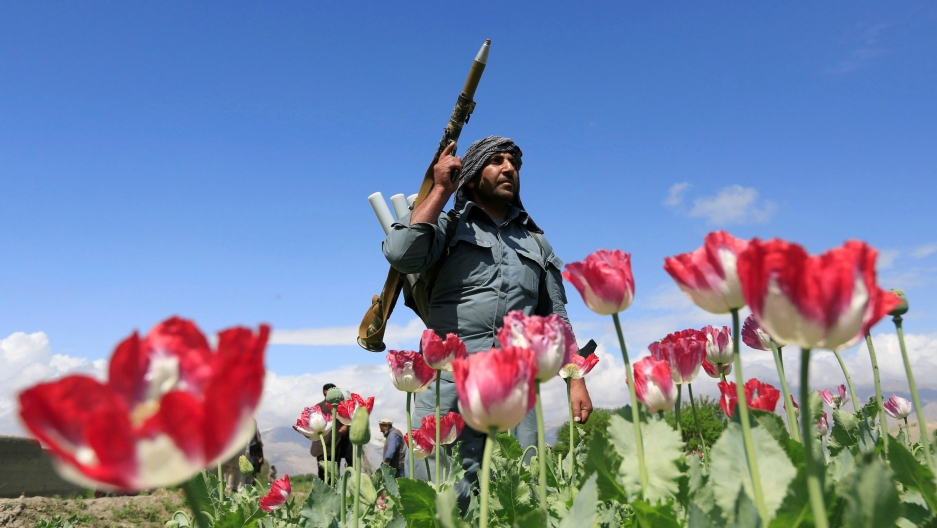 An Afghan policeman destroys poppies during a campaign against narcotics in Jalalabad province, Afghanistan, April 4, 2017.

The US military has launched airstrikes on drug-making laboratories in Afghanistan as part a new joint strategy with Afghan forces to cut off funding for the Taliban, authorities said Monday.

Ten drug labs were destroyed in a series of aerial bombardments in the poppy-rich southern province of Helmand — a Taliban stronghold — on Sunday night, said General John Nicholson, commander of US and NATO forces in Afghanistan.

The joint operation came days after a UN report showed opium production in Afghanistan — a key source of funding for the Taliban's 16-year insurgency — soared 87 percent this year as the area under poppy cultivation hit a record high.

Nicholson said targeting the drug labs would "hit the Taliban where it hurts" and warned of more strikes to follow.

"The strikes that were prosecuted last night will continue," Nicholson told a news conference in Kabul, stressing that poppy farmers would not be targeted.

"We hit the labs where they turned poppy into heroin. We hit their storage facilities where they kept their final products, where they stockpiled their money and their command and control."

Afghan A-29 Super Tucano attack planes destroyed two labs and US aircraft including B-52s and F-22s took out another eight, the general later told reporters in a call to the Pentagon.

He noted that 400 or 500 drug labs active are across the country.

"This is going to be steady pressure that's going to stay up and we are not going to let up," he said.

The Taliban profits from the illegal drug trade by taxing poppy farmers and traffickers across the war-torn country, pocketing an estimated $200 million a year, official data shows.

It was the first time the F-22 stealth fighter had conducted an airstrike in Afghanistan, and Nicholson noted that the US Air Force now has more air power at its disposal as operations against the Islamic State group in Iraq and Syria taper down.

US Forces began identifying drug labs to hit after President Donald Trump's strategy announcement in August made it easier for American air power to proactively target the Taliban and its sources of revenue and infrastructure.

Nicholson said the operation was the first "significant" time he had used the new authorities.

The Taliban issued a statement denying the existence of the drug-making facilities.

The US-Afghan operation comes as around 3,000 additional American troops promised by Trump are deployed to help train and assist beleaguered Afghan security forces who have been struggling to beat back Taliban and Islamic State insurgents.

The UN Office on Drugs and Crime warned last week that the "significant levels" of opium cultivation and trafficking in Afghanistan would fuel the insurgency and boost funding for militants.

Nicholson said the Taliban had evolved into a "narco insurgency" fighting to protect earnings from drug trafficking, illegal mining, kidnapping and murder for hire.

"The fighting that they're doing is to control the means of production, to control the poppy fields, to force farmers into growing poppy and then be able to process this opium into heroin in the relative safety of these areas," he said.