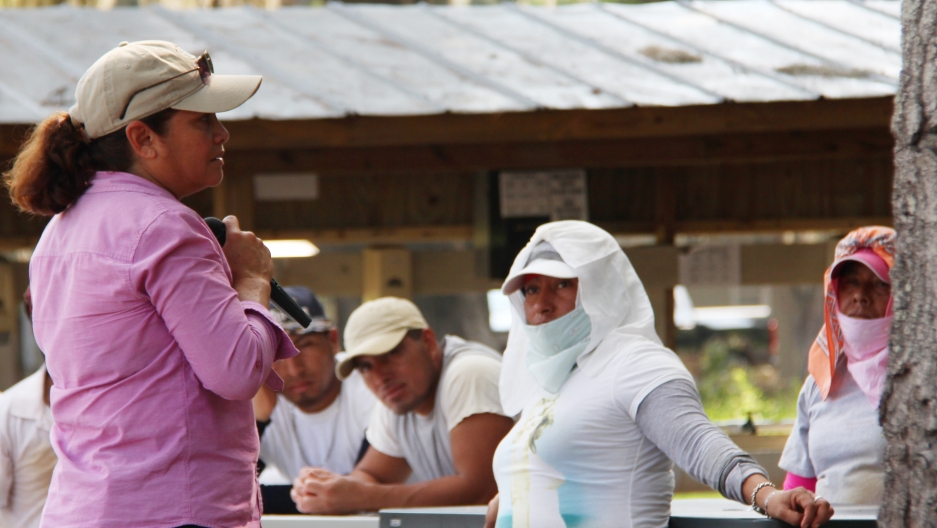 Members of the Coalition of Immokalee Workers educate farmworkers about their right to work free from sexual harassment, forced labor and other labor abuses.

Editor's note: When this story was originally published, the central character was, with her permission, identified by her first name, to protect her from reprisals for speaking out. After the story was published, the woman contacted us and said she felt like being identified by even her first name was placing her in danger. Though our policy is to avoid post-publish changes to content, unless the content is inaccurate, we also consider requests to make changes based on protecting a person’s safety. For that reason, we have replaced the character’s name with a pseudonym.

Her workplace was not a safe place, and despite being a teenager, Isabela knew this for certain. It didn’t feel OK that her bosses touched her, said sexual things and propositioned her constantly. But she saw it happen to other women, too. Even changing jobs didn’t help. New bosses in new work sites did the same awful things, she said.

Isabela, who didn't want her full name used due to privacy concerns, has been a tomato picker in Florida's produce fields since the mid-'90s, when she was 15 years old and left Mexico with some friends in search of a better life. She didn’t know then that what she was experiencing has a name — sexual harassment — and that when it happens in the workplace, it is illegal. But Isabela got to a point where she had had enough. And what she and other women farmworkers did might serve as a lesson for women in workplaces nationwide.

Long before the #MeToo campaign, women working the nation’s agriculture farms have been reporting that the fields were not a safe or dignified place for them — rife with sexual harassment and abuse incidents. But now, Florida’s tomato pickers say they’ve ended the problem in their workplace. It’s a big claim, and it may still happen on odd occasions, but the tomato pickers there report that the culture of rampant abuse is no longer.

Related: So many women are saying 'me too.' Editors weigh in about how to move the conversation forward.

So, what did they do to stamp it out?

Isabela's own experience of trying to stop her bosses is an important part of the story.

Isabela realized that many women were targeted, and she began to feel it was just how the fields were. The women's work out there was supervised by men, who probably some years before had been pickers just like them. But the men had risen in the ranks. These men also were in charge of transporting the pickers from a central location in town to the fields. Called troqueros, these employees were the ones with the power to decide who worked the fields on any given day.

Isabela said after about 10 years as a picker, this one particular troquero fixated on her and her friend.

“It wasn’t easy. He would get in the truck and touch us, and we would say 'no.' And then one day he called me and told me to come to him because he had something to show me. He was the boss, the one who gave us the work, so I went and he was showing [me] some accounts and I didn’t understand why he was showing it to me, right? Then he says that he likes me a lot and wants to have a relationship with me. I told him "no," that I wasn’t looking for a relationship right now, that all I wanted to do was work and not have any problems, especially because he is a married man. He told me I wouldn’t have any problems, that he would take care of everything; he’d pay my rent. I told him all I want to do is work. Then, he grabbed my hand and pulled me to him to touch him. I yanked back my hand. I felt bad. Sad. I wondered, 'Why is this happening? All I need to do is work.'”

After she refused his advances, he told her she no longer worked there. Now she was unemployed. A friend told her about an organization, the Coalition of Immokalee Workers, suggesting they might help her get her job back. It was a long struggle but CIW finally got justice for Isabela.

Yet, no one seemed pleased, not even Isabela. It didn’t stop the abuse that was so widespread. 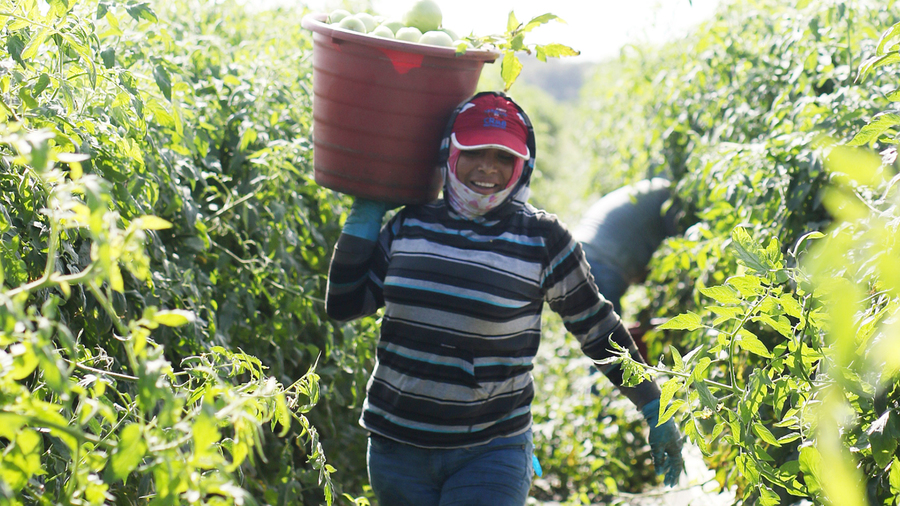 A worker is shown harvesting tomatoes on a Fair Food Program farm.

Lupe Gonzalo, also a tomato picker for years in the Immokalee fields and now an organizer with CIW, says they had a big battle on their hands. “Many times, it was the crew leaders who did the harassment,” she said. Crew leaders are kind of like floor managers. They supervise and have the power to hire and fire. Their bosses, the executives of the large farms, at best, might have been ignorant to the abuses going on in their fields and at worst, just closed their eyes to it.

The problem was endemic across all the fields, Gonzalo said. So, Gonzalo and others at CIW began to identify ways to try and end the abuse. “It’s that women don’t know they have rights enshrined by law, that here sexual harassment is something punishable by law,” she said. “Women didn’t know this.”

So, women pickers at CIW decided to make stamping out sexual abuse a major part of the campaign they were fighting for with other things such as better wages and work conditions. And this is when things really began to change.

On a recent Sunday evening in early November, the town of Immokalee was mostly shut down. Except for the laughter and marimba tinkering that came out of the Coalition of Immokalee Workers building: It was the weekly meeting of CIW’s women’s group.

The Harvey Weinstein scandal had the women talking. The essence of the conversation was this: How is it these women with so much more money and status than them are still experiencing this harassment when these tomato pickers who earn minimum wage in backbreaking work have stamped it out?

“See, it’s a problem we have eliminated, now women speak out,” Gonzalo said. “When a woman feels safe to speak about the problems, the abuse can be stamped out because now the crew leaders and the abusers know there are consequences."

Multiple female farmworkers in Immokalee said without question that in the past, sexual abuse was a constant problem, but now they no longer experience it.

According to Susan Marquis, dean of the Pardee RAND Graduate School, women realized there had to be consequences for abusive behavior. “Real-world sanctions,” Marquis said, was one key part.

The consequences for behavior that crosses the line, Marquis said, also had to be swift and visible to all. So, the Coalition of Immokalee Workers fought to have a safe complaint system written into their labor agreement — the Fair Food Program. In addition to better pay and improved working conditions, workers insisted on a way to address sexual harassment. And they added a small but hugely significant detail: an independent body to be the arbiter, Marquis said.

“Most violations take two or three days to investigate,” she said. “But it’s responding quickly, investigating thoroughly and then having real-world consequences. In the case of the farmworkers, it’s the growers losing market share.” Marquis has studied the CIW model extensively; she has a book on the subject coming out in December called, "I Am Not a Tractor! How Florida Farmworkers Took on the Fast Food Giants and Won." 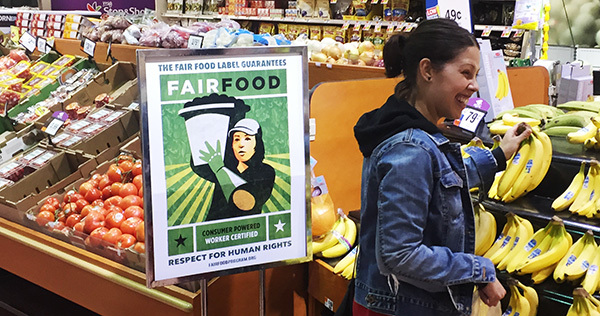 Marquis said the labor agreement signed by the Coalition of Immokalee Workers in 2011 — the Fair Food Program — brought large tomato farms on board with the new workplace standards. One way they did this was to simultaneously convince the biggest purchasers in the country — think McDonald's, Walmart, Whole Foods — to only buy produce from fields that were part of the Fair Food Program, which basically meant the tomatoes they would sell or cook came from fields where workers are treated justly. If a farm owner doesn’t take action against sexually abusive supervisors, there is an instant consequence — they won’t be in the Fair Food Program, and they cannot sell to the large tomato buyers. Their market disappears.

Jon Esformes is the co-CEO of one of Florida’s largest growers, Sunripe Certified Brands. He says this bottom-line incentive helps CEOs make sure their managers don’t abuse their power, but he insists, it’s also just the right thing to do.

“I’m not doing anything extra for our folks,” Esformes said. “I’m doing what I’m supposed to be doing in accordance with the law and our own company ethics and morality.”

Esformes employs thousands of immigrants to work in his fields, and with the Fair Food Program, this means his company pays a living wage, provides better working conditions like good bathrooms and shaded areas for break time. And they use hours when the workers are on the clock to do the mandatory sexual harassment trainings.

“We don’t use the words, ‘It’s no longer acceptable behavior,’” Esformes said. “We don’t talk about it in those terms, we talk about in terms of criminal behavior that will not be tolerated. And we will go after you.”

The Fair Food Program covers about 35,000 workers in the tomato fields in Florida. It's not nationwide — yet — nor does it extend to other crops. Lupe Gonzalo says the Coalition of Immokalee Workers is trying to change that. And while they work on that, she thinks that some of Hollywood’s women, or even women in the public radio world, should take a page from the book of Florida’s tomato pickers.

“Just look at what we, women who have basically no opportunities, right, look at how we built this program. I think working together is the only way to change all these things that are happening,” Gonzalo said.