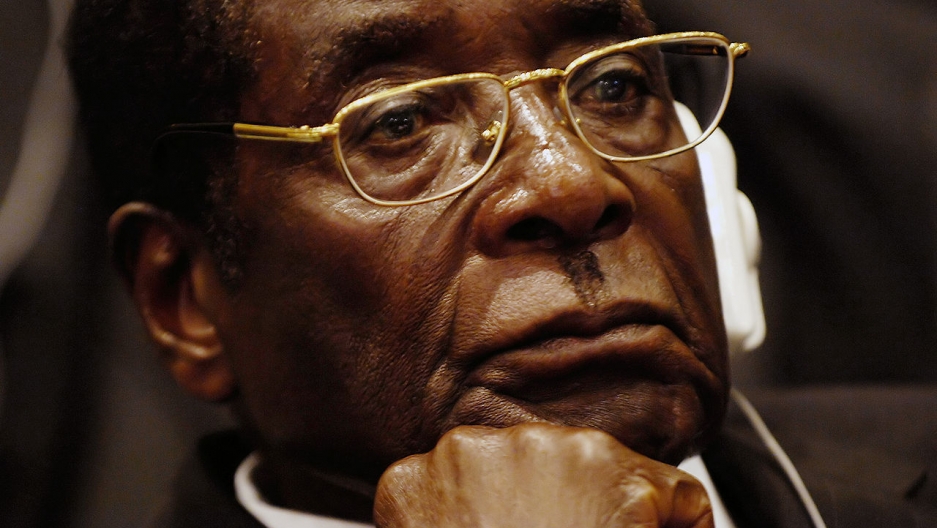 Robert Mugabe at the African Union summit in Addis Ababa, 2008.

US Department of Defense

President Robert Mugabe is under house arrest after what appears to be a military coup in Zimbabwe. You can never write off Mugabe completely, but it seems possible that his remarkable 37-year hold on power is coming to an end.

Mugabe rose to prominence in the guerrilla struggle against white minority rule in the 1970s, and outmaneuvered his political rivals to become prime minister in 1980 after Zimbabwe gained independence from Britain. Since then he has survived repeated political challenges, economic disaster and international pressure.

Mugabe was born in 1924 in what was then the British colony of Southern Rhodesia, and he was raised at a Roman Catholic mission station. He first learned of revolutionary politics and techniques from his priest, an Irish Jesuit. He was introduced to Marxist ideas by white students while at college in South Africa. But for many years he was not especially active politically, focusing more on providing for his orphaned younger brothers and sisters with his pay as a teacher.

With its relatively temperate climate, Rhodesia had attracted substantial white settlement. As the British government began withdrawing from its colonial empire, the white settlers unilaterally declared independence in 1965, in an effort to avoid black majority rule.

Mugabe jumped into politics in the early 1960s, to demand equal rights. He helped form a party called the Zimbabwe African National Union, better known as ZANU. He was thrown into jail in 1964, where he languished for 10 years.

Upon his release, he fled to Mozambique, to join the guerrilla wing of ZANU, and soon clawed his way up to become its sole commander. ZANU was not fighting the revolutionary struggle — the “Chimurenga” — alone. A rival group called ZAPU was led by Joshua Nkomo, a politician from the Ndebele minority.

Mugabe is from the majority Shona people and has always used populist nationalist rhetoric to try to garner support from his fellow Shona-speakers, often at the expense of the Ndebele.

When the rebel groups formed a temporary alliance, called the Patriotic Front, the white regime was forced to the negotiating table.

At a peace conference in London in late 1979, Mugabe won the admiration of the Western world by walking back his Marxist ideology and agreeing to allow the whites to retain their property and political rights and to share power with all his rivals. Elections followed in the new year, and Mugabe swept to power. He was sworn in as the first prime minister of independent Zimbabwe on April 17, 1980.

Zimbabwe, by the way, is the name of an ancient city-building culture that thrived in the region from the 11th to the 15th centuries.

The transition was relatively peaceful and there was tremendous international support for Mugabe and the new country.

The US, for example, saw the whole region and its struggles through the prism of the Cold War. White settlers, like those in South Africa and Rhodesia, and the Portuguese colonies of Angola and Mozambique, were seen as champions against pro-Soviet rebels. Mugabe’s success seemed to offer a third way. Black liberation without a communist takeover.

For almost 20 years he was the darling of the West, and was showered with honors, including dozens of honorary degrees.

So when Mugabe started arresting prominent opponents in 1982 and killing their supporters in 1983, the reaction abroad was muted.

The killings primarily targeted the Ndebele, and were largely carried out by the North Korean-trained “Fifth Brigade.” The best estimate is that 20,000 people were killed. Many of the bodies were dumped in disused mine shafts.

Mugabe became president in 1987, and Zimbabwe effectively became a one-party state. Every election in independent Zimbabwe has been compromised by intimidation, fraud, corruption and lack of media freedom.

Independence and freedom did nothing to improve the lot of most Zimbabweans, and in search of a scapegoat, in early 2000, Mugabe gave the green light to an aggressive campaign to seize white-owned farms.

Land was supposed to be distributed to veterans, but much eventually got snapped up by Mugabe's cronies. Agriculture was the backbone of the economy, but the upheavals crippled farm production. The economy collapsed; Mugabe’s administration responded by printing money; hyperinflation set in.

Food shortages became endemic. Opposition to Mugabe surged, with the Movement for Democratic Change, led by Morgan Tsvangirai, coming close to unseating Mugabe. International criticism also grew, with the UK leading a campaign of sanctions against Mugabe and his ruling clique. His record of human rights abuses led multiple colleges around the world to revoke the honorary degrees they’d given him.

Yet the wily old fox was able to keep playing off his rivals and cling on to power.

Mugabe had never cultivated a successor, and had always cut down anyone who got too big, even old colleagues.

That changed this year, when Mugabe’s wife, Grace, made a play for the succession, and the 93-year-old Mugabe did not counter it. Last week, the first lady’s main competitor, Vice President Emmerson Mnangagwa, was denounced and he fled abroad, saying he feared for his safety.

Mnangagwa is himself a veteran of the revolutionary struggle, and known for his loyalty. Grace Mugabe is known as “Gucci Grace” by some Zimbabweans dismayed by her expensive lifestyle.

It seems the army was not happy with the prospect of Grace Mugabe consolidating her position as heir apparent. It’s not clear what will happen next, but don’t write off Robert Mugabe just yet.