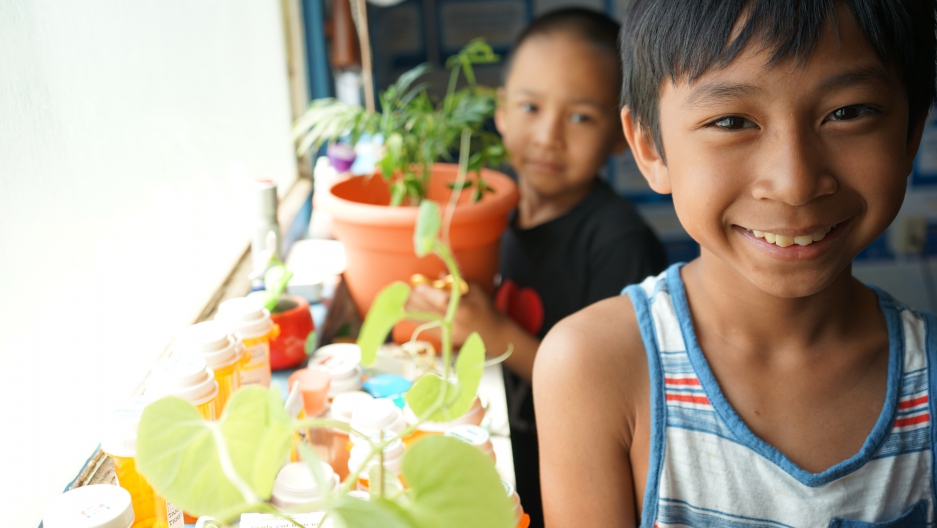 Maddox and his brother in their apartment in Lowell, Massachusetts.

When the Khmer Rouge took over Cambodia in 1975, the regime carried out a genocide that killed over 1.5 million people and specifically targeted nearly all of the country’s artists and musicians. Very few survived.

After the genocide, thousands of Cambodian Americans were resettled in the US as refugees in the city of Lowell, Massachusetts. Three decades later, the public schools in Lowell are teaching kids how to play traditional Cambodian music — which is an art form that was almost once lost.

As it turns out, nine-year-old Maddox is an amazing dancer, and his biggest fan — when it comes to Cambodian dancing — is his grandmother. Her name is Ly Chea, though Maddox likes to call her Lychee, and he says that she’s “just as sweet as the fruit.” She’s come to see him dance at his school’s performances, but most often she watches him dance at home. 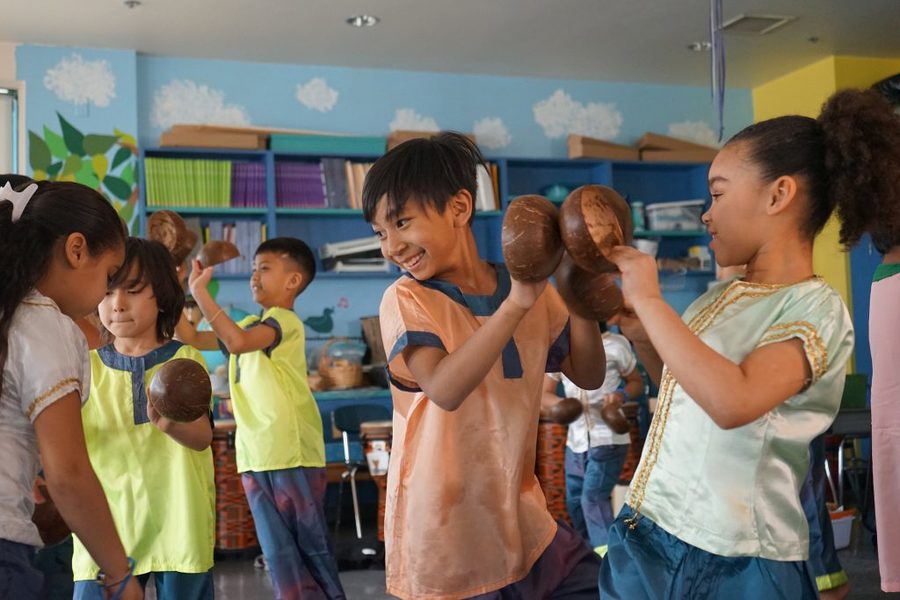 Maddox lives in a one-bedroom apartment with his grandparents, his mom and three brothers, in addition to an aunt and uncle and their baby. The badges hanging on the door show the names of the factories where they work on the assembly lines.

The day I visit, his grandmother sits on the floor with a cutting board, chopping leafy greens and spices for a Cambodian stew. His brothers play video games in the bedroom; they won’t eat the stew and instead ask for instant noodles. But Maddox, he likes Cambodian food. 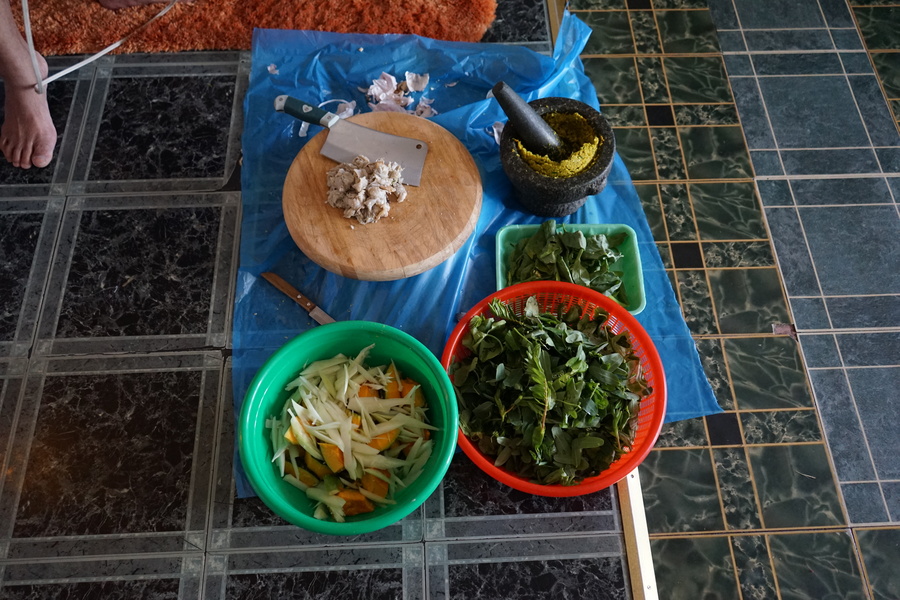 Maddox’s grandmother sits on the floor with a cutting board, chopping leafy greens for a spicy Cambodian stew. Here are some of the ingredients.

He picks up the remote and searches for Cambodian music videos. After fashioning himself a traditional costume using bedsheets and blankets, he practices his dance moves in front of the TV. When Maddox dances, his grandmother beams. She smiles so widely, the corners of her eyes wrinkle. She looks over from time to time, as she stirs the bubbling soup.

Behind him, the windowsill is lined with potted plants and rows of prescription medicines. The sun shines through the rows of orange bottles. There are too many containers to count, and Ly Chea tells me she’s not sure what’s wrong with her. She asks me to read the labels and explain but I can’t decipher them either. What we do know is this: Around 3 p.m. each day, she starts to feel dizzy and needs to lie down, and sometimes she starts to cry.

Maddox shares, “She would always cry, 'help me, help me.' She says she wants to scream for her mom and dad, but they passed away. So I give her her medicine, and then she feels better. But then she feels sick again.” 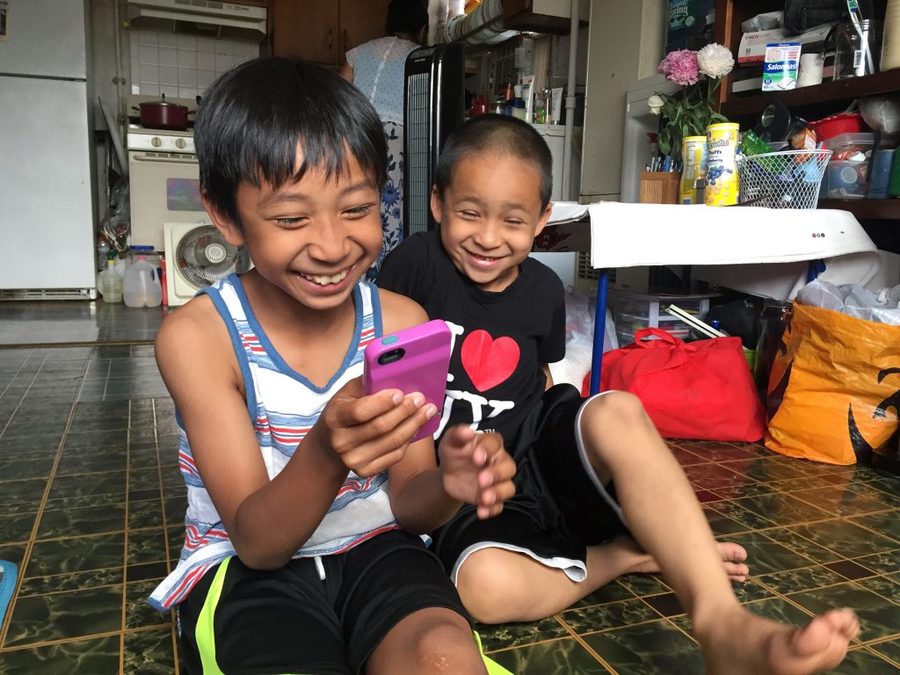 Nine-year-old Maddox uses an app to help translate the words he doesn’t know in Khmer when he accompanies his grandmother to her doctor’s visits, where she’s treated for symptoms of PTSD.

These are classic symptoms of post-traumatic stress disorder. Later Ly Chea tells me she has nightmares about the day the Khmer Rouge came for her parents and took them away. She was just a teenager then.

Maddox often takes his grandmother to her doctor’s visits, so that he can help translate. But he’s just a kid, so he doesn’t always understand what’s going on, and he isn’t fluent in Khmer.

So he uses an app to help. Pecking away at the key of his phone, he shows me the words he’s learned by using the app.

This is an excerpt from an episode of “The New American Songbook,” which is produced by Heidi Shin and Ian Coss, in partnership with The GroundTruth Project, WGBH, and MassHumanities. To hear the story of why Maddox is such a gifted dancer, listen to the full podcast below.