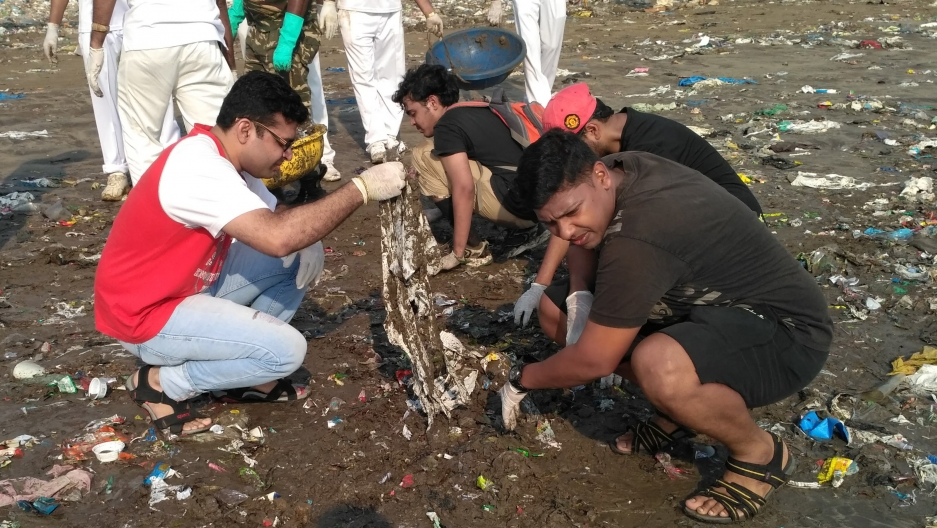 Mumbai has 72 miles of coastline, some of it covered in mangroves and some of it sandy or rocky — but none of it is clean.

There isn't a beach culture here. It's not a place for gathering and tanning —  more often it's a public toilet, garbage dump and, sometimes, a free place to hang out. Exercising and running are next to impossible. The litter makes it an obstacle course. There are cows, crows and stray dogs — but there are also a gazillion candy wrappers, chips packages, cookie packages, shoes, bottles, detergent sachets, disposable cups, and thousands and thousands of blue and white plastic bags. 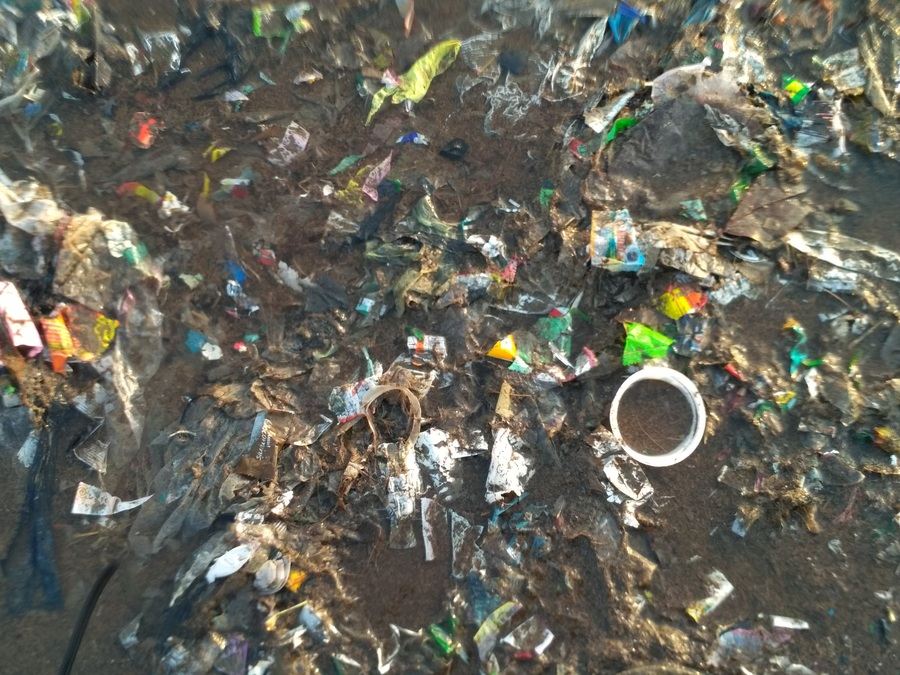 The beach is strewn with trash, much of it plastic.

But when the tide is out, hundreds of volunteers can be seen on their hands and knees — thankfully wearing gloves — and pulling all these things out of sand into a plastic tub. They're here because of one man who's basically tackling the trash problem head on.

Afroz Shah is a constitutional lawyer and a full time "ocean lover and a beach cleaner." Two years ago, he moved to a beautiful apartment with a view of the ocean near Mumbai's Versova Jetty. From his windows, he could see the sea, but, also, a disturbing amount of trash.

That "something" translated to getting down on his knees to pick trash off the 2 miles of public beach. Since Oct. 2015, he's been clearing trash for four hours every weekend in what the United Nations has called the world's biggest beach clean up ever. His efforts have inspired others.

On this weekend, Shah is on the beach with 300 people. He's in a blue T-shirt and trackpants, muddy sneakers and thick rubber gloves — which were a gift from a Norwegian volunteer. He's sweating profusely and it probably doesn't help that the black brimmed hat he's wearing is made of felt. He says it's the only one he's found in two years that fits right and doesn't blow away.

When a TV reporter asks him to stand and answer some questions, he politely asks them to come crouch near him so he can keep working while they film. 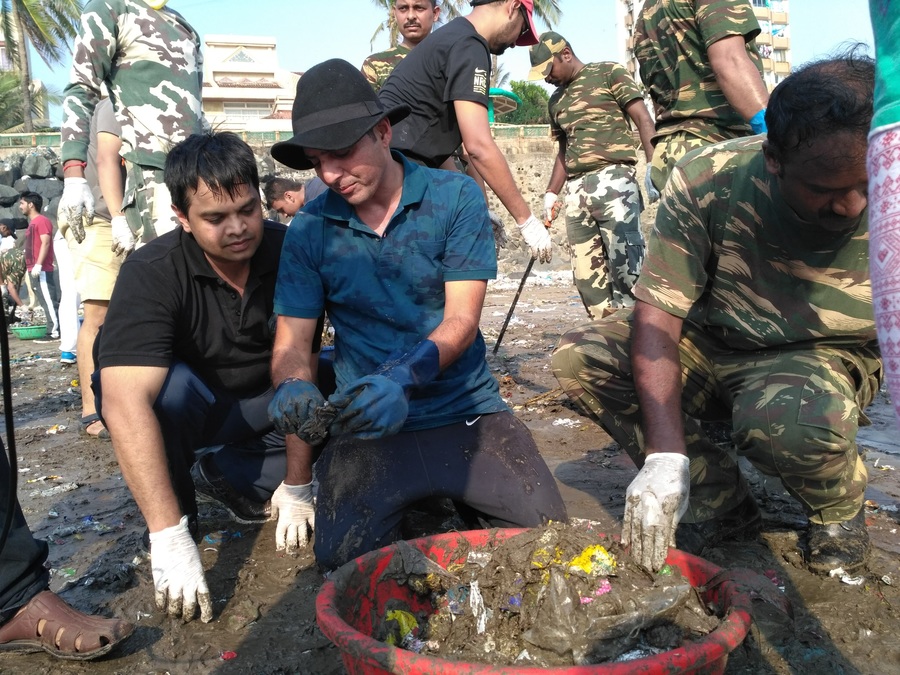 On weekdays, Afroz Shah (center, in black hat) is a constitutional lawyer. On the weekends, he tries to spend at least four hours picking up trash at the beach. He's inspired countless others to do the same.

Shah is at the center of the action and there is a lot going on. Today, the sand is damp and the trash is embedded deeply.

"You use your hands or any implement to load it in plastic buckets, which we reuse every week. The buckets are emptied into piles in a corner of the beach. The tractors take it to the local segregation center. What isn't segregated goes to the landfill," he says.

Small groups are digging up garbage and loading up trash. You can hear Gujarati, Hindi, Marathi, English, Tamil, Urdu, Russian — and there are some people from Norway, the UK and Japan. There are kids from the nearby slum, volunteers from the neighborhood mosque, soldiers, consultants, teachers and college students.

Disha, 15, is barefoot in the muck, hauling out a bag. She used to go to school but now she has to pitch in to support her family and five siblings. She comes to the beach partly because it's fun to hang with her friends, but also because it makes her feel good to be doing something altruistic.

"Where I live, there used to be a bin, but the authorities have removed it because no one was using it, people bagged their trash and dumped it in the gutter around it. Even we used to throw it in the ocean."

But, don't people know that what you put in will come back? "No," she says flatly. "It's done. It's over. It'll go into the water. People think it'll go in the water. It won't come back and the water will take care of it." She says that since coming to the beach clean-up, she doesn't litter anymore. In fact, she puts packages and wrappers in her pocket until she finds a dustbin, and tells others to do the same.

There's also Shailesh, a 31-year-old fisherman, who's manning the drinking water station for the volunteers. Shailesh deals with the trash every single day in his work. Until two years ago, all the fishermen were finding more plastic than fish in their nets. Then Shah came and spoke to him and his colleagues. And it's made a difference.

Earlier, he says, whatever trash showed up in the nets was dumped out right on the beach. Now they get it. "Today, there is much less trash in our nets. Because, you know, when we take the garbage off the beach, it doesn't go back into the ocean." Plus, he adds, "the others see us picking up trash every Saturday and Sunday, so they feel bad for us and refrain from littering on the beach."

But that's not true for everybody. There are plenty of people who ask Shah why he doesn't just complain to the city about the trash. It's the government's job to clean up. He says he thought about it, he is a constitutional lawyer.

Then he decided, "No, this ocean is mine. I spent my childhood here. I have a special [connection] with this ocean," he says. "Why should I wait for a government body to tell me what to do? ... All governments are bound to protect the environment. But as a human being, so am I."

Now the city is collaborating. Even on a Sunday, there are government workers here, helping out. Shah is so certain and passionate, he's changing minds everyday.

More than two years after he first started, Shah and his felt hat continue to be visible on the beach. Versova beach is lighter by more than 7,000 tons of garbage and every day Shah gets emails from people all over the country who tell him how he's inspired them, which makes him happy.

"For me, it's a very personal journey. I started the clean-up, I will continue doing the clean-up," he continues. "I tell my volunteers if none of you will be there, I will still be standing, I have to do my personal stuff for this planet." 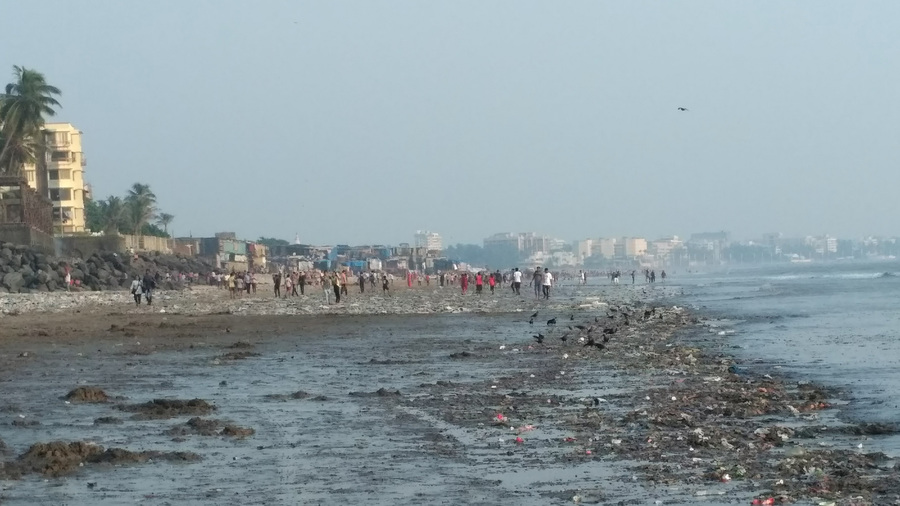 The beach near Mumbai's Versova jetty