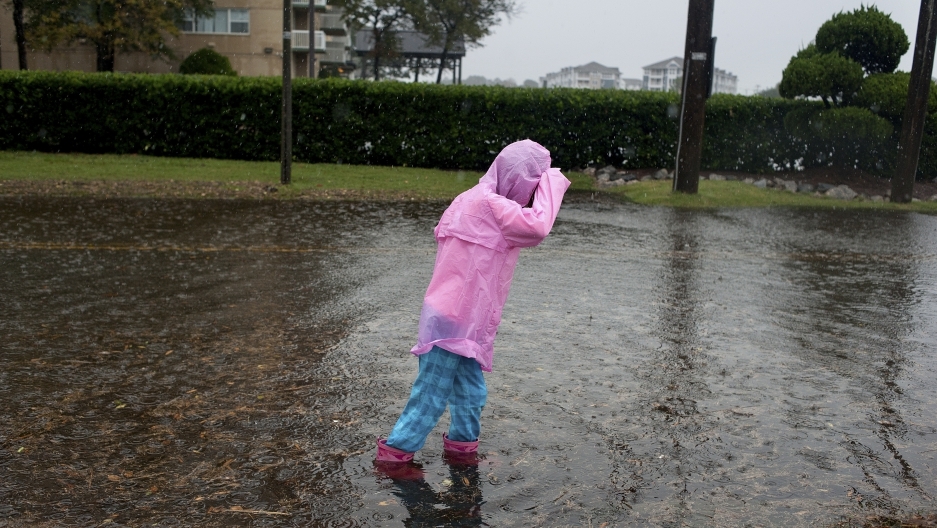 A child plays in the flooded streets of Norfolk, Virginia, during Hurricane Sandy in 2012. Norfolk is one of many coastal cities around the world experiencing more frequent flooding as sea levels rise in response to warmer global temperatures.

We can’t make sense of where we are as a global community — and where we might be going — without exploring how people are changing the natural systems we rely on, and how those changes often come back to haunt us. That’s why PRI’s The World established its environment desk in 2008: To bring a dedicated focus on this crucial beat to a program that takes a daily pulse of the world.

But times change. Our country has become much more polarized in recent years, and the word “environment” has itself become one of the fault lines, increasingly more of an ideological indicator than a broadly shared value. The word has also diminished over time — what was once a powerful new way of understanding how humans are damaging our world and ourselves has, for many, become a box that holds marginal concerns that aren’t part of our daily lives.

All of which is why The World is saying goodbye to its environment desk and hello to something new: its Livable Planet desk.

Livable Planet is a new frame for reporting on these evermore important challenges. It’s about people as part of the natural world instead of apart from it. It’s about finding ways for human communities and enterprise to coexist alongside the healthy natural systems that support us. It’s about what we can agree on and aspire to, rather than just what we fight over. It’s about what we need to have a future.

For us at The World, this isn’t so much a radical change as part of a natural evolution. We’ve long brought these values and approaches to our reporting. But in a time of deep and even dangerous divisions in our society, it’s time to make them more explicit. We believe it’s the responsibility of journalists not just to report on issues, events and conflicts, but to help create space for bridge-building, engagement, civil discourse and problem-solving. Our Livable Planet desk is a key part of that effort. And in the coming months and years we’ll increasingly go beyond just reporting to direct engagement with our audience through outreach, live events, and social media communities.

Speaking of digital and social communities, here at PRI.org you may occasionally find a Livable Planet story that came from another PRI show, like Living on Earth or Science Friday, though we'll make sure it always has the Livable Planet spirit. You can find all our coverage on PRI.org here. And, if you're into Twitter, follow us on Twitter.

The Livable Planet desk is led by The World's founding environment desk editor Peter Thomson, an award-winning veteran of more than a quarter-century on the beat, along with editor Jeb Sharp, staff reporters Carolyn Beeler, Daniel Gross and Jason Margolis and a host of contributing reporters. We hope you’ll tune in, become engaged and join the conversation.