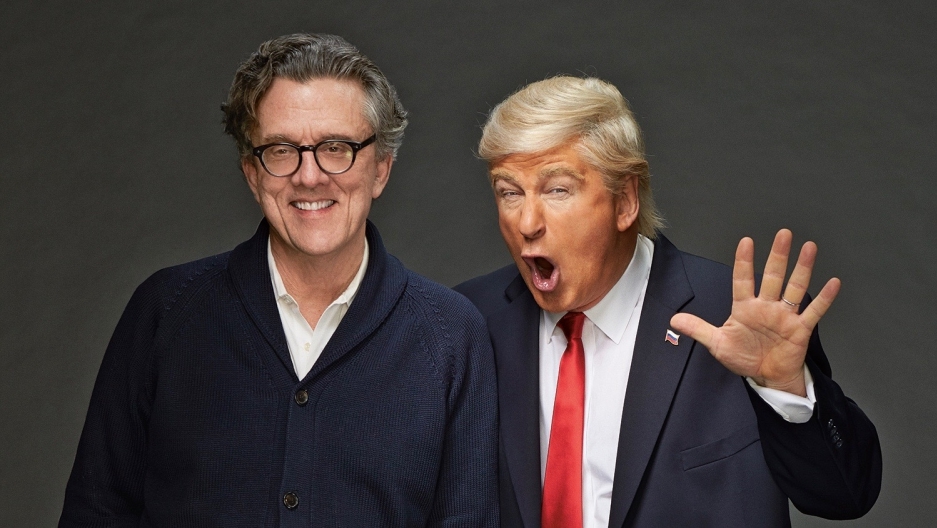 Actor Alec Baldwin has been channeling Donald Trump on TV’s "Saturday Night Live" for over a year. Now he’s doing it in print, too.

Baldwin has written a book, in collaboration with Studio 360 host Kurt Andersen, called "You Can't Spell America Without Me: The Really Tremendous Inside Story of My Fantastic First Year as President Donald J. Trump (A So-Called Parody)."

After playing Trump on SNL for so long, Baldwin finds he slips in and out of the role easily—perhaps more easily than he would like.

“When you do Trump week after week after week, I’ll be talking to somebody—and it's bizarre—you just erupt into this thing,” Baldwin says. “You'll look at somebody and say, [speaking like Trump]: ‘I’d like to have the roasted chicken, please. Very well done. Very well done. I want you to roast the shit out of that chicken.’ [in his real voice] You know, you just burst into that. It's weird.”

Some of Baldwin’s most memorable roles have been jerks, villains and arrogant manipulators, from Jack Donaghy in 30 Rock, to Blake in David Mamet’s Glengarry Glen Ross, to the scheming baby in Boss Baby. All of these roles were the “lead up” to playing Trump, Baldwin jokes.

Baldwin makes an important distinction, however, between Jack Donaghy and Donald Trump. “I think that Trump is malicious. I don't think Jack was malicious,” he explains. “Whenever the malice crept into the script, we took it out.”

Mamet, on the other hand, writes about “predation in the human world,” Baldwin says. “You see it in Glengarry and you see it in Oleana, and you see the way people behave [in his] real tough dramas. It's ugly.”

Baldwin says he was always taught to avoid judging the villains and the jerks while acting them. Someone once told him to think of these characters as “the negative value in the piece."

Baldwin has a special place in his heart for great movie villains and for the actors who played them. Here are a few of his favorites:

Louise Fletcher as Nurse Ratched in One Flew Over the Cuckoo’s Nest: “I loved Fletcher as Ratched, because she's being nice… Oh my God, it's maddening what she does to [McMurphy].”

James Anderson as Bob Ewell in To Kill a Mockingbird: “He gives one of the greatest performances… Bob Ewell is just one of the worst characters, the most despicable characters. [Anderson] doesn't back off from it at all. It's thrilling. Great acting.”

Lee J. Cobb in On the Waterfront: “He's just a lesson in acting. A guy that rides the perfect blend of the forceful and the brutish and the charming and the kind of back-slapping pol he is.”

Other Baldwin favorite villains include:

James Mason in The Verdict

Elisha Cook in The Maltese Falcon