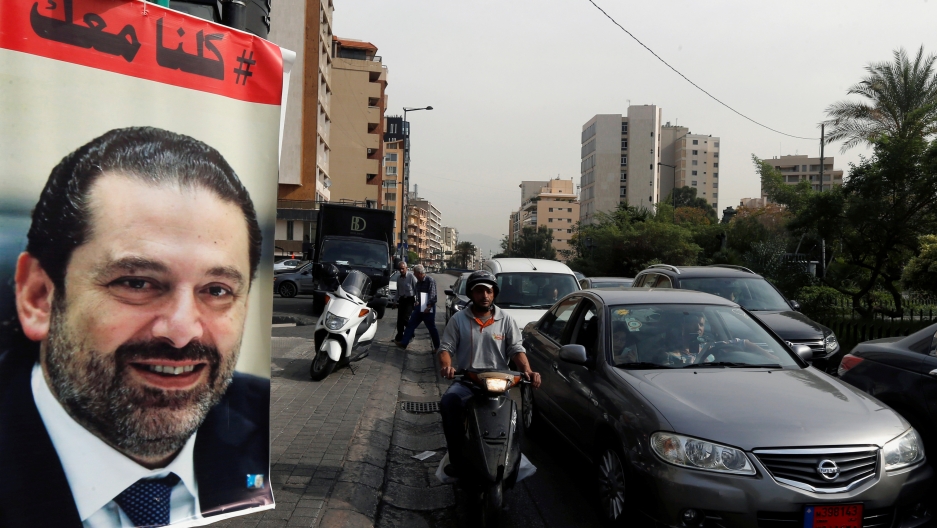 Cars pass next to a poster depicting Saad Hariri, who has resigned as Lebanon's prime minister, in Beirut, Lebanon, Nov. 13, 2017.

For more than a week, the Lebanese people have been consumed with one question. In shops, in bars, over balconies and online, they have been asking: Is our prime minister a prisoner?

Saad Hariri, who became prime minister less than a year ago, sparked a national crisis when he resigned on Nov. 4 in a televised address from Saudi Arabia.

He accused Iran of creating “a state within a state” in Lebanon through its support for Hezbollah, and said he feared his life was in danger.

The fact that the statement was delivered from the Saudi capital Riyadh led people to believe that Saudi Arabia — which backs Hariri financially — had pressured him to resign.

Related: Talk of war and instability are all too familiar in Lebanon

Then he went quiet. Hariri was not heard from for days.

At the same time, the ambitious Saudi Crown Prince Mohammad bin Salman was rounding up members of his family and detaining them in what the government described as an anti-corruption drive, and what critics called a power grab.

Many in Lebanon began to suspect that Hariri might be kept against his will.

Oh the Lebanese and their dark sense of humor... #savingprivatesaad #hariri pic.twitter.com/2TSMFF3OtA

"The obscurity surrounding the condition of Prime Minister Saad Hariri since his resignation a week ago means that all positions and actions declared by him or attributed to him do not reflect the truth," he said in a statement.

Even members of Hariri’s own party began to ask questions. Fouad Siniora, himself a former prime minister, said Hariri’s return was “necessary to recover respect for Lebanon’s internal and external balance.”

It took eight days for Hariri to break his silence. In a live television interview on Sunday, a Lebanese journalist questioned him on the rumors surrounding his resignation.

He refuted the rumors surrounding his stay in Saudi Arabia. He recalled the murder of his father, who was killed by a car bomb in Beirut in 2005 — an attack in which Hezbollah is suspected of carrying out.

"I saw what happened ... when my father was martyred. I don't want the same thing to happen to me," he said.

"Here in the Kingdom of Saudi Arabia, I am free,” he said. “I have complete freedom, but I want to look after my family as well.”

Related: The 'Cold War' between Iran and Saudi Arabia is heating up. Here are 5 things you should know about it.

But the broadcast did little do dispel the conspiracy theories.

Hariri appeared uncomfortable during the hourlong interview, repeatedly casting his eye to a man behind the interviewer. Hariri was asked why he had been silent for the past week, to which he replied: “I have been in a reflective state.”

But he did offer a way out of the crisis, apparently softening the rhetoric of his first statement.

He said that he would return to Lebanon in the coming days, and hinted that his resignation may not be final. If Hezbollah would respect Lebanon’s policy of “disassociation” from the region’s many conflicts, he could stay on.

For now, the ball is in Hezbollah’s court.