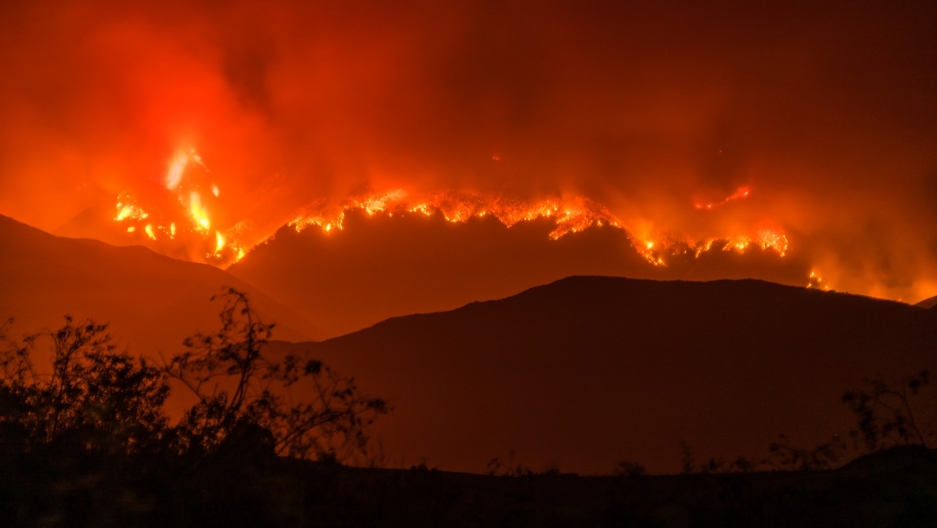 The Whittier fire burns in near Goleta, California, July 2017.

People returning to their homes in northern California after fleeing the region’s devastating wildfires are facing another hazard: the cleanup process.

By one estimate, the fires produced as much air pollution in just a few days as California’s cars do in a year. And with entire neighborhoods scorched in some areas, the ash left behind from the fires isn’t just from furniture and two-by-fours, but also toxic materials like asbestos and garages full of paint and pesticides. So, what are the potential health risks after fires like the ones in California, and how can they be mitigated?

First, for those returning to their homes, Geoffrey Plumlee, an environmental health expert with the US Geological Survey, recommends checking out CalEPA’s fact sheets on minimizing exposure to toxic materials.

“The white ash that’s left behind that has a lot of these alkali hydroxides can be very fluffy and easily disturbed and picked up and breathed in,” he says. “So you want to wear a high-quality N95 dust mask and wear long sleeves, long pants, gloves and eye protection to help minimize any possible exposures to whatever’s in the ash that might be there.”

Plumlee would know: He studied the ash remaining after fires whipped through southern California in 2007. “We found quite a lot of variability, depending on the age of the house, how hot it burned and the type of construction,” he says. “But we found a variety of things like arsenic, hexavalent chromium, lead, there may be some asbestos. And then we also found a variety of other metals and some things like sodium hydroxide, calcium hydroxide and other hydroxide minerals that were left behind when vegetation would combust completely.”

As for smoke exposure, Lisa Miller, a pediatrics and pulmonary medicine specialist at the University of California, Davis, says it’s known that wildfires can lead to a short-term uptick in people seeking medical treatment, especially if they have pre-existing respiratory conditions. But the long-term effects of smoke exposure are less well understood.

“The population that is most well-studied, not surprisingly, are firefighters,” she adds. “But even with that group of individuals, the long-term effects have been difficult to document, mostly because it’s just flat-out difficult to follow up on some of these individuals. So we don’t know a lot.”

With wildfires becoming more intense each year, Plumlee and Miller both say we have more to learn about the human health cost of living alongside fire. For Plumlee, that means understanding better what toxins become smoke-borne when a house or building burns, and what stays behind in the ash.

“Older houses have legacy things like asbestos and lead and some pesticides, so understanding that particularly, unfortunately, as more houses burn or buildings burn,” he says. “And then understanding what the longer-term impacts from exposures to smoke downwind [are], based on what’s known about what’s in the smoke.”

Looking to smoke’s long-term effects on the human body, Miller says there’s more to know, too. She explains that right now, there’s a lack of reliable biomarkers that can tell doctors about the amount and type of smoke a person’s been exposed to.

“We’re really good at using mathematical modeling strategies to come up with estimates of exposure,” she says. “But actually determining the amount of exposure and the type of exposure on an individual basis is really, really challenging. So I think that’s a major gap that we need to address in science.”