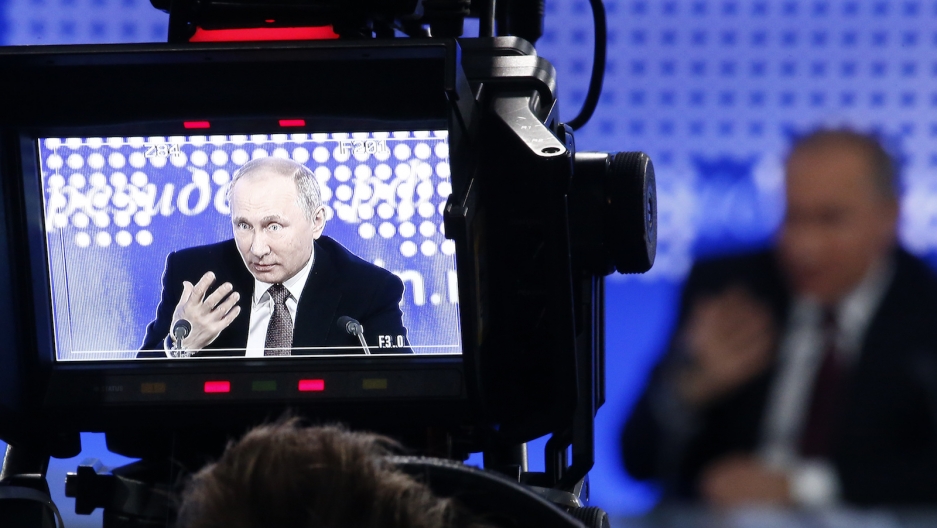 Russian President Vladimir Putin is seen on the viewfinder of a camera during his annual end-of-year news conference in Moscow, Russia, December 23, 2016.

Russian lawmakers raced Friday to draft measures requiring US media outlets to register as foreign agents, saying they could be adopted as early as next week.

American social networks might also be affected because US news organizations would have to post a "foreign agent" tag on their social media pages, said Pyotr Tolstoy, deputy speaker of the State Duma, the lower house of parliament.

The measures, which are being prepared ahead of Russia's presidential election in March, would be a huge blow to already tattered US-Russia ties.

Volodin told Russian reporters the new measures, which are likely to affect dozens of US news organizations operating in Russia, including CNN and Voice of America, could be adopted at first reading on Wednesday and at a third and final reading next Friday.

Washington has been fighting what it calls a barrage of "fake news" from Russian media, including RT and the Sputnik news agency, which it says is aimed at interfering in US domestic politics.

"What the US authorities are doing today is an infringement on fundamental civil rights, on freedom of speech," Volodin said.

"The United States speaks beautifully about the freedom of speech when it comes to other countries but acts dogmatically itself."

Tolstoy called for the mobilization of all of the country's political forces, saying it was "an emergency situation."

Lawmakers said the measures targeting US media would be "reciprocal" and would set the same limitations that US authorities were seeking to impose on Russian media.

"This is not only financial documentation which entails dozens of questions," Volodin said, referring to requirements faced by "foreign agents" in the US. It is "the disclosure of all information," he added.

Russian telecoms watchdog Roskomnadzor, for its part, proposed blocking the websites of foreign media groups and nongovernmental organizations, without any need of a court order.

Roskomnadzor has repeatedly threatened to block Facebook and Twitter if they do not comply with a government demand to store the personal data of Russian nationals on Russia-based servers.

In 2012, Moscow adopted a law which requires NGOs that receive funding from abroad to register as "foreign agents," a move critics said was part of a clampdown on civil society.

Lawmakers said the existing law would be amended to include media groups.

The head of Russia Today, Margarita Simonyan, said on national television Thursday that the broadcaster was "suddenly" told by Washington that it had until Monday to register as a "foreign agent" or face having its accounts frozen, among other measures.

She said RT would file a legal challenge against the demand by the US Department of Justice, which could require it to identify itself as a "foreign agent."

Registering would also hinder the channel's work in the United States because it would have to publicize internal documents including their employees' addresses and salaries.

"It will very much complicate the possibility of interviewing people because we will have to report this too," she said. "There are a huge number of limitations."

She also said the demands contradicted both democracy and freedom of speech.

"It deprives us of fair competition with other international channels, which are not registered as foreign agents," she was quoted as saying by RT.

Simonyan also denounced the US move in a caustic tweet.

"The US Department of Justice wheeled out a cannibalistic Monday deadline," she tweeted. "Can you feel the smell of freedom?"

Washington, which considers RT a propaganda arm for the Kremlin, told it in September to register its American operation under the Foreign Agents Registration Act, which is aimed at lobbyists and lawyers representing foreign political interests.

Last month Simonyan complained to President Vladimir Putin that RT and Sputnik had come under pressure in the United States.

"As soon as we see concrete steps limiting the activities of our media, there will be a retaliatory response," Putin said at the time.