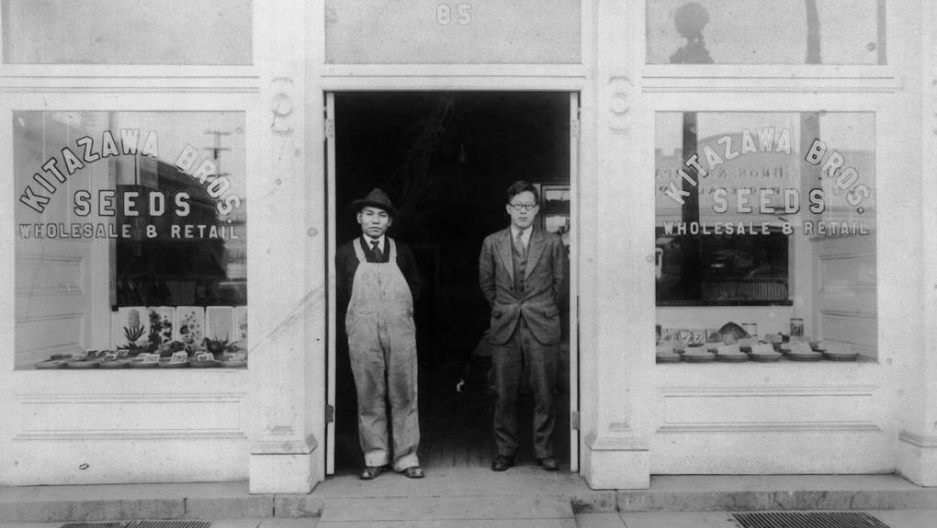 Gijiu Kitazawa (left) started the Kitazawa Seed Company back in 1917. He had to restart the company after his family was sent to a prison camp for Japanese Americans during World War II.

Maya Shiroyama and her husband pull up to a ranch-style tract home in San Jose, California.  An older man waits for them at the screen door.

Tom Kitazawa, 87, is the last surviving son of the founder of Kitazawa Seed Company, a business that opened its doors 100 years ago.

Tom’s father, Gijiu, was a Japanese immigrant who sold vegetable seeds to Japanese Americans hungry for the taste of home, things like Japanese eggplant, shiso leaves and daikon.

But the seed company almost went under several times — first, when the Kitazawa family, along with tens of thousands of Japanese Americans, were locked up in camps during World War II. Gijiu had to rebuild the business from the ground up after the war ended.

Then decades later, another Japanese American family — Maya’s — saved the business from shutting down. But the two families never had a chance to sit down and share stories until this year.

Before World War II, two-thirds of Japanese Americans worked in agriculture and related businesses. The war changed all that.

Tom, who was a boy at the time, remembers being forced to leave San Jose. His dad had to sell all of his seed stock because the family didn’t know when — or if — they would be coming back.

“People had to get rid of everything in their homes because they could only take what they could carry,” Tom tells Maya.

He says the family was shoved into a boxcar that took them to Heart Mountain, a journey that lasted several days.

After the war, the Kitazawas eventually made their way back to San Jose. And Tom says his dad, Gijiu, worked hard to restart the business.

“He immediately started doing those kinds of things that he felt needed to be done,” Tom says. “He made contacts with the seed companies and his suppliers.”

Maya Shiroyama’s connection to Kitazawa began after the war. She was born in the 1950s and grew up outside of Fresno, where both sets of her grandparents had farms. Her grandparents were also sent to prison camps, but returned and resumed farming.

“Both families were fortunate to go back to [to their farms],” she tells Tom. “Their neighbors took care of it. So Kitazawa is how I learned how to garden.”

But Maya didn’t know that the seeds she planted would one day connect her family with Tom’s.

In 1999, Maya drove down to the Kitazawa Seed Co. to find out why her dad’s order of seeds hadn’t come through. She found out from Tom’s sister, who was running the company, that the business was struggling and she planned to shut it down.

“I told her that’s a huge shame, because Kitazawa Seed Company is just a huge part of Japanese American history,” Maya says.

The next year, she bought the company and moved it to Oakland. Kitazawa now has an online store and offers seeds for hundreds of varieties of vegetables from Japan and other parts of Asia.

But some things have stayed the same — like the seed packets, which are small manila envelopes with green ink.

Before Maya and her husband leave, Tom Kitazawa asks them to send him a few seed catalogues for his grandchildren — so they'll know their family history.