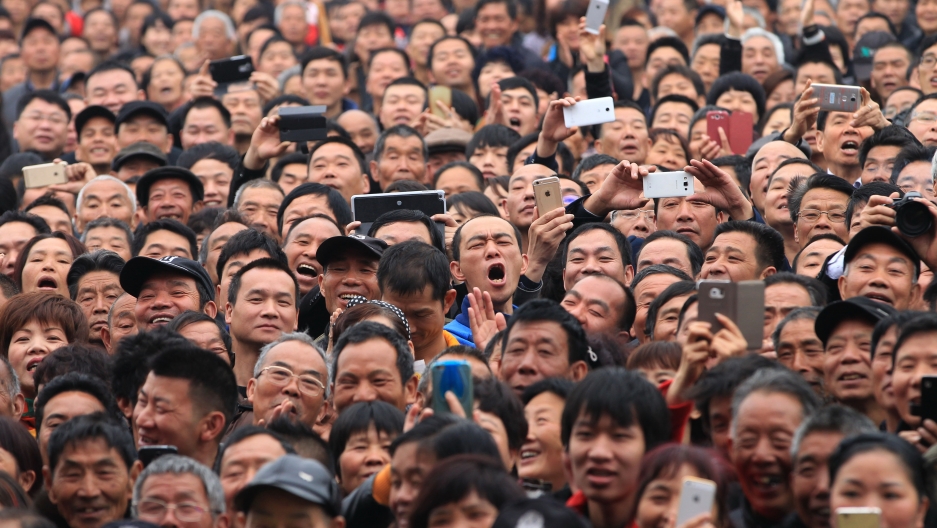 Spectators react as they watch a performance during a local martial arts cultural festival in Zhejiang province, China.

Take George Orwell’s "1984." Now sprinkle in that episode of "Black Mirror" where characters live in a world in which every aspect of their lives is dominated by ratings.

That’s one way to think about the Social Credit System, a plan that the Chinese government will make mandatory for all its citizens by 2020.

It’s like a credit score system, but instead of just financial information, this one will also pull together a person's political leanings, purchase history and even their social interactions to calculate their "trust score."

Chinese officials say it’s a way to influence their citizens’ behavior to benefit society and move their country forward, but others think it’s just the latest step in the country’s long history of state surveillance.

Rachel Botsman has written about China’s Social Credit System in her book "Who Can You Trust? How Technology Brought Us Together and Why It Might Drive Us Apart."

The World spoke to her about what the plan could look like in 2020.

How a person’s rating could be calculated:

The Social Credit System — I guess we would probably call it, like, a "National Trust Score" — will look at different dimensions of a person's life. So things that you might expect, like whether you pay your bills on time or your mortgage. But also your purchasing patterns, things that you say on social media and whether those things conforms with the government. Where it gets, I think, very 1984, is it will look at the patterns and the behaviors of your friends and your social connections as well.

The kind of behavior that could bring a person’s score down:

Well I think there's behavior that you'd expect — if you make a fraudulent payment or something like that — but then there are things that are more subtle. For example, if you buy work shoes or [diapers], you could be seen as a responsible citizen and your score might go up. But if you're buying lots of video games your score will maybe go down, because people would think that you're lazy. If you happen to post something on Tiananmen Square, that's likely to negatively impact your score. This goes beyond the way we think about traditional credit scores, and really gets into your character and behaviors in a way that is quite frightening.

The potential perks of having a high “trust score,” and the consequences of a low “trust score”:

The benefits are really interesting, everything from being fast-tracked to visas, to getting discounts on hotels, or car rentals, or insurance policies. The part that worries me is in fact the penalties, because if your trust score goes below a certain level, it could impact everything from where your children go to school, to what jobs you can apply for, and the type of mortgage that you can get. Your transgressions, they will follow you forever — it is really a permanent record of your so-called trustworthiness. So your behavior could impact your children or your grandchildren for decades to come. There seems to be no limits, there seems to be no boundaries, as to how far this can go.

The Chinese government’s reasons for implementing the Social Credit Score in 2020:

The government's justification is both economic and social. So the reason why they're saying they need this is because just doing business in China can be hard. You know, when I interviewed people from China on this, they don't necessarily see this as a bad thing, because many people in China do not have traditional credit scores, those sort of traditional gold standards of trust. And it's also so culturally embedded in the way that they live. So they'll say in their grandparents’ generation, [people] knew that the Communist Party had a file on them, but they had no idea what was in that file. This is actually the same system. Digitized, but it's more transparent.

This particular chapter, it was one of the hardest pieces of the book to get right, because it's really easy to take a Western lens. It's really easy to point our finger at China without stopping and actually saying, "well how far is this culture of surveillance from the West?" It sounds like completely nightmarish territory that the West would never descend into, in terms of using these trust algorithms that are unfairly reductive about people. But then when you really look into the amount of data that companies are collecting, and how they're using that data to get a complete picture of how we behave, where we are at any given time, what our political views are — we're not that far off. It's just the government doesn't own that data. And this is another point you hear from Chinese people — that it isn't so far off in the West, it's just that you have no control, because it's a black box system. There's a part of me that accepts that this notion of privacy is dead. And this idea that we're in control of the data that we post online and where that goes — I just think that's an ignorant position to take.

You can read an excerpt from Rachel Botsman’s book here.