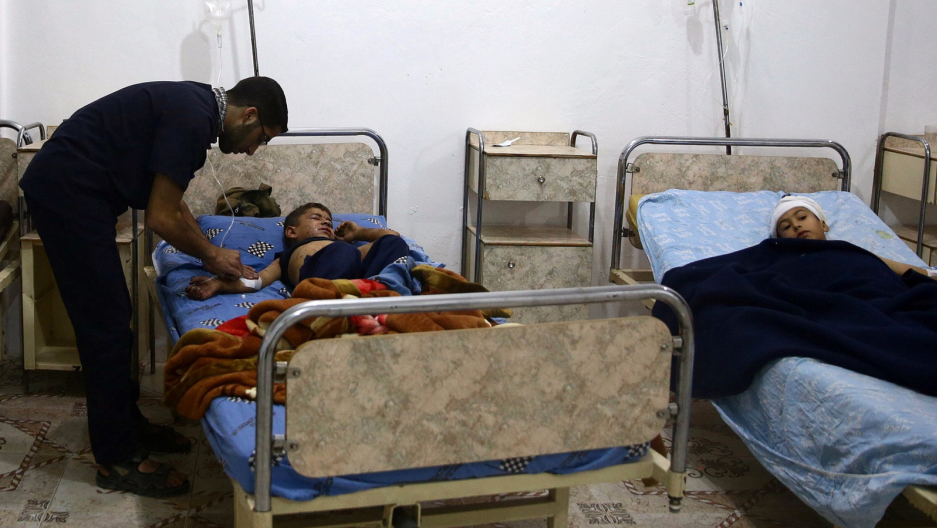 Injured students lie on beds at a field hospital in the town of Jisreen, in the eastern Damascus suburb of Ghouta, Syria, Oct. 31, 2017.

Surgical consultations via Facebook, reused sutures and gloves and half-doses of expired drugs: Doctors in a besieged opposition enclave near Syria's capital are improvising to cope with shortages.

Blood and skid marks stain the floor of a dimly lit operating room in Douma, a rebel-held town in the Eastern Ghouta region, where a surgeon was hard at work extracting medical sutures from a patient.

The United Nations warned on Thursday that some 400 civilians are in urgent need of evacuation from Eastern Ghouta, including 29 who would die unless they were allowed to leave immediately.

"After we finish with the thread, we wash it and sterilize it again" for use on another patient, says 23-year-old nurse Anas Daher.

With the operation over, Daher removes his surgical gloves and, instead of disposing of them, scrubs them with water and soap and tosses them into a red basket full of other pairs.

They are taken into an adjacent room, powdered and placed into a sealed jar with sterilization tablets for 24 hours so they can be used again.

"We doctors in Eastern Ghouta are taking steps that are medically undesirable," says Mohammed al-Omar, the head of the surgical department at the Damascus Countryside Specialized Hospital.

"We are re-sterilizing most of our surgical equipment, from gloves to tubes and even the surgical blades and sutures — even if it's for a single stitch, and just one centimeter long."

Omar said he and his team are aware the materials are meant for a single patient, but they had no choice.

Since 2013, Syrian government troops have imposed a devastating siege on Eastern Ghouta, leading to rampant food and medical shortages and skyrocketing prices for whatever is available.

Residents of the rebel enclave have found creative ways to secure their everyday needs, including burning plastic to generate crude fuel and using solar panels to power water pumps.

Eastern Ghouta's doctors, too, have had to make do with whatever is readily at hand.

They ration medication, giving patients half the required dose of drugs or expired medication, Omar says.

Hospitals limit operations to emergency surgery and the few remaining surgeons are forced to conduct procedures outside of their specialties.

For guidance, they have turned to the internet to carry out real-time consultations with specialists.

Hussam Adnan, a 44-year-old surgeon, was one of four doctors who, in October, operated on an infant with an esophageal deformation.

But none of the gathered surgeons were children's specialists, so they used Facebook's video messaging application to get guidance from a colleague on the outside.

"Normally, this kind of operation would be referred to Damascus. But because of the siege, we've been forced to carry it out here, via internet communication with a children's surgeon outside Syria," Adnan says.

The procedure was nerve-wracking, but ultimately successful.

"The child's heart slowed for a few moments, and we felt our own hearts stop with him. We revived him, his pulse started up again and the smiles returned to our faces," Adnan says.

But within 48 hours, their young patient — frail from a nutritional deficiency caused by food shortages — passed away from medical complications.

In addition to rationing, Douma's struggling medical services have also turned to locally made supplies.

A small underground cellar in the town is buzzing with activity, with members of the Al-Shifaa medical organization, their faces covered in surgical masks, fill brown glass bottles with a white lotion.

"We produce serums to clean wounds because it's rare to find high-quality serums. We also produce anti-lice medication and other creams for skin ulcers and scabies," says Ammar Abdo, an Al-Shifaa pharmacist.

The organization is even using a large electrical loom to make its own gauze, but they can only produce around eight kilos (17.5 pounds) a day.

"It's barely enough to cover anything but we're doing our best. ... It's just an alternative for the situation we're in," Abdo, 30, says.

Despite being one of four "de-escalation" zones in Syria agreed by regional stakeholders, there has been an uptick in government bombardment on Eastern Ghouta in recent days.

Humanitarian groups have also warned of a malnutrition crisis in the area, with at least two children reported to have died from malnourishment or related complications in recent weeks.

Families are relying on mixtures made from rice, wheat and barley as substitutes for baby food.

In a simple, unfurnished home in Douma, Suzan mixes rice powder with a little water and brings it to boil over a coal-burning fire.

The blend will be her nine-month-old daughter's main meal, with powdered milk and other baby food unavailable.