It's just after 2 p.m. on a sunny day in September, and a motley group of people are standing outside Amsterdam's main courthouse. Among them is a worried-looking couple: a young Arab man with dyed hair, a diamond earring and a tight T-shirt, holding the hand of an older white man in a more nondescript outfit.

Next to them is Sandro Kortekaas, the founder and director of LGBT Asylum Support, an NGO that assists refugees who have fled to the Netherlands because of their sexuality. Increasingly, advocates say, these asylum-seekers are facing local immigration authorities who think they are lying.

"Today it was a case of an Iraqi refugee in which the Dutch IND [Immigration and Naturalization Service] don't believe he is gay," Kortekaas explains with a sigh as the group packs into cars and drives off. "This is becoming quite common in the Netherlands at the moment, and that's something we worry about."

The IND does not release any statistics about LGBT asylum applications. One researcher, Sabine Jansen, is writing a report on the issue and estimated there are a few hundred LGBT applicants a year. How many of these are rejected is not clear, but lawyers and activists working on the issue say it is happening regularly and with increasing frequency.

"At the moment we are almost reaching 90 cases," adds Kortekaas. "That's a lot, that's really too much." 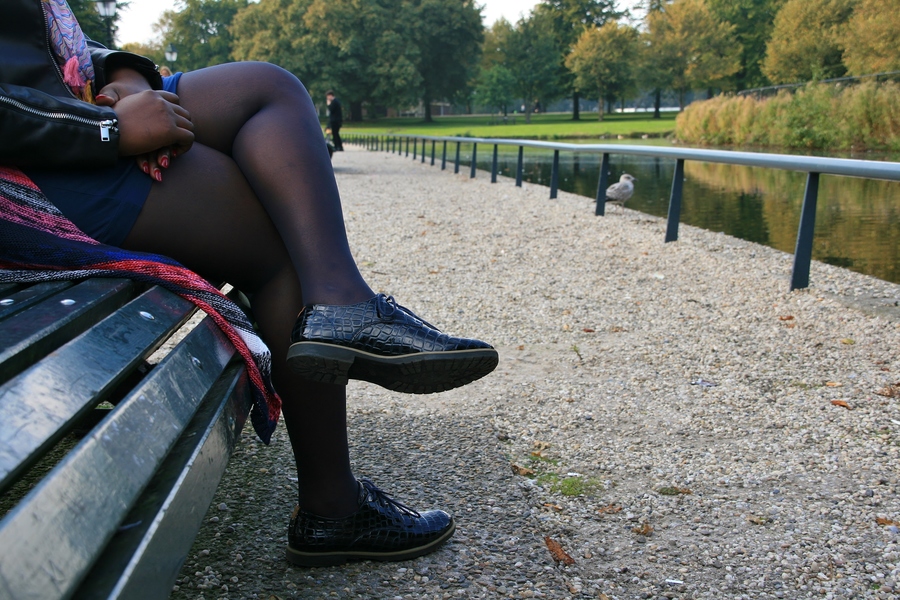 Shayleen, 22, says she fled her home country of Uganda two years ago after being imprisoned because she is a lesbian. The Netherlands rejected her asylum application. She is appealing.

One of these cases is Shayleen, a 22-year-old Ugandan woman with a soft voice who came to the Netherlands two years ago. Shayleen is a lesbian, and in Uganda, that can mean jail, or even death.

"When I discovered who I was, and who I still am, I wasn't so open about it," she explains on a park bench in The Hague. "In my country it's a crime, an abomination, a disease. It's all sorts of the worst names."

She says she was imprisoned without a trial after someone discovered her sexuality, and nearly died in prison. Once she was released, she fled to Europe, and eventually ended up in the Netherlands. She applied for asylum, but nine months later, she was rejected.

The reason? Shayleen told the IND that she would be killed if she went back to Uganda. She says they then accused her of lying because the official punishment is life imprisonment, not death. They also said that they didn't believe she was actually a lesbian, she adds.

During the interview, officials asked her multiple questions about her sexuality. They asked her to talk in depth about how she discovered that she was a lesbian, how long it took, how it affected her and her family, what she had done to accept herself, whether she still had any doubts, and so on.

Shayleen is currently appealing the decision, but hasn't heard back yet, leaving her in limbo and worried about being returned to a country where her life would be in danger because of her sexuality.

For activists such as Kortekaas, the IND's interview process and its apparent focus on inner sexual discovery needs to be reformed. Early last month, LGBT Asylum Support led a protest outside the Dutch Parliament, with dozens of demonstrators wearing T-shirts pointedly emblazoned with the words "Not Gay Enough" in Dutch.

They presented a petition to politicians signed by thousands demanding that a new expert committee be created to assess LGBT asylum appeals. They are now in dialogue with the IND to see if they can make it happen.

Even for those LGBT refugees who are granted asylum in the Netherlands, however, the current process can seem blind to the nuances of how sexuality might be expressed or explored in difficult situations or countries.

"My best friend, he simply had pictures of him with a girl on Facebook," explains Adrian, a 22-year-old from Jamaica. While Adrian was one of the lucky ones, receiving asylum within a month of arriving in the Netherlands, his best friend's application took several months longer.

"[The IND] didn’t understand that Jamaica is a society where it's not easy for everyone to be up front with their sexuality," he says. "Sometimes you have to take a picture with a girl, but that doesn't mean that you're straight."

The crux of issue is: When a refugee's asylum application rests on the fact that they are gay, how can immigration authorities know for sure?

Adrian pauses for a second, kissing his teeth as he thinks before answering. "I don't think there is any right way to prove that anyone is gay."

Advocates say there may be a few people who lie to try to get asylum — but it’s a tiny minority.

For Adrian, it all seems very unlikely: "Even for gay people, it's really hard to convince the IND that they're gay. So I think its a lot of effort to go through."