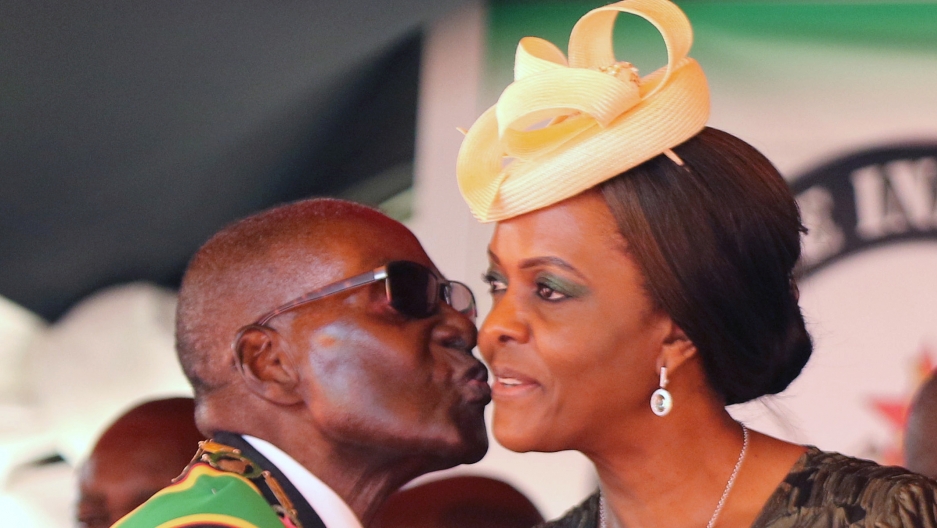 Robert Mugabe kisses his wife, Grace, at a rally to mark the country's 37th independence anniversary, in April.

At 93, President Robert Mugabe of Zimbabwe is the oldest head of state in the world. But he's not letting age slow him down. He is running again in next year’s elections. But his wife, Grace, 52, is positioning herself to succeed him in the event of his death.

Mugabe has run the country since it won independence from Great Britain in 1980. Before that, he led a long and bloody guerrilla war against the country’s white settler regime.

“He is a very astute politician,” says Andrew Meldrum, assistant Africa editor for the Associated Press. “He is a wily politician. He has out-maneuvered everybody within Zimbabwe, and around Africa, and even internationally.”

He has held onto power with a degree of ruthlessness. Enemies have been jailed or killed. Even allies aren't allowed to build up any power. Meldrum himself was jailed and expelled from the country after reporting on torture.

“There have been vice presidents, but it’s a very perilous position to be in,” says Meldrum. “So the vice presidents are either elbowed aside or a trapdoor opens and they disappear.”

The latest example is Vice President Emmerson Mnangagwa, who fled into exile this week after being denounced by the Mugabes. Mnangagwa had been in the cabinet since independence, and was known for being extremely loyal. He says he now fears for his life.

Grace Mugabe is more than 40 years younger than her husband. She was a receptionist when they met and began an affair. They had children together, before Mugabe’s first wife died.

In the last few years, Grace Mugabe has developed political ambitions, and started honing her political skills. She’s taken over the Women’s League of the ruling ZANU-PF party. She’s held rallies across the country, but “she is not widely popular,” according to Meldrum’s analysis. “She was originally known as ‘Gucci Grace’ among some people for her shopping trips overseas.”

“She has taken on a more political role,” he adds, “and she does distribute charity donations of clothes and food in rural areas. So she knows what needs to be done to gain popularity.”

Grace Mugabe has also weathered scandals, including separate assault charges in South Africa and Hong Kong. She was able to avoid prosecution by asserting diplomatic immunity.

She has spoken openly of her ability to become vice president and succeed her husband, in the event of his death.

When asked about creating a dynasty, she says, “Why not?”