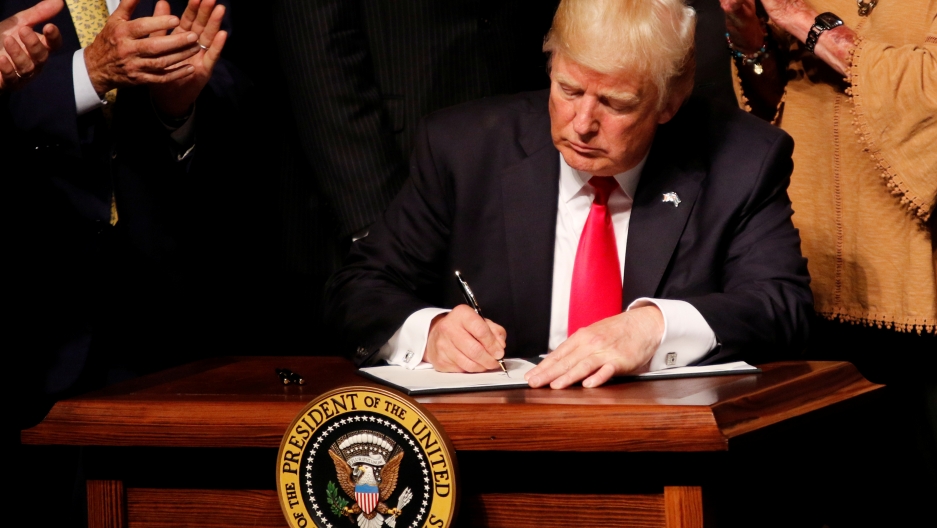 US President Donald Trump signs a document after announcing his Cuba policy at the Manuel Artime Theater in the Little Havana neighborhood in Miami, Florida, US June 16, 2017

Tighter restrictions on US travellers to Cuba will go into effect on Thursday, officials said, almost five months after President Donald Trump vowed to crack down.

The US Treasury said the measures are designed to steer American travellers away from Cuban firms tied to the military and towards the communist island's fledgling private sector.

Related: US expels Cuban diplomats in the latest threat to US-Cuban relations

Much of the half-century-old US economic embargo against Cuba remains entrenched in law, but under former president Barack Obama federal authorities began to loosen some rules.

Ties had begun to warm, and in 2015 the countries' exchanged ambassadors for the first time since 1961.

But in June Trump appeared in Miami before a cheering crowd of Cuban-Americans, including veterans of the failed CIA-backed Bay of Pigs invasion, to vow to reverse Obama's measures.

That promise finally bore fruit on Wednesday, when Treasury Secretary Steven Mnuchin laid out the new or revived rules.

"We have strengthened our Cuba policies to channel economic activity away from the Cuban military and to encourage the government to move toward greater political and economic freedom for the Cuban people," he said.

Under the directives, Americans will be forbidden from doing business with entities on a State Department list headed by the Cuban defense and interior ministries.

Also on the list are five major holding companies with ties to Raul Castro's government or military, and which between them control much of the organized tourism sector.

The list goes on to list dozens of major hotels in Havana and several resorts, along with five Caribbean marinas, ten stores in touristy Old Havana and industries serving the military.

Two rum distilleries are on the list, along with a shopping mall, a photo developer and a real estate broker.

In addition, Americans seeking to evade the general ban on travel to Cuba will only be allowed to do so on educational trips organized by a US firm and with a guide.

In addition to staying in privately-run accommodation and thus supporting small-scale capitalism, the travelers will be expected to engage in authorized exchanges with Cuban people.