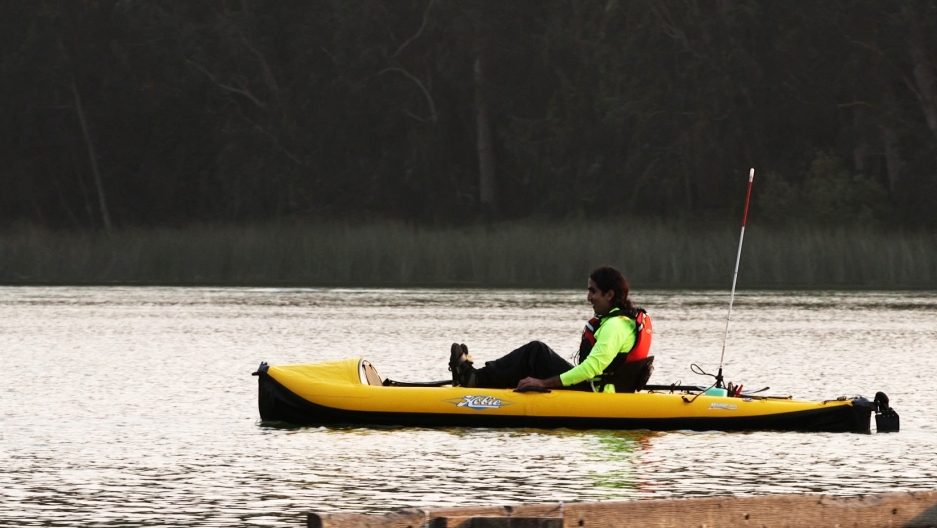 Ahmet Ustunel, who is blind, paddles his kayak solo on San Francisco’s Lake Merced. His goal is to kayak across the Bosphorus Strait in Turkey, his home country.

Ahmet Ustunel remembers his daily commute to high school well. He'd wake up at home, on the Asian side of Istanbul, Turkey, a city that straddles two continents. Then he would take a ferry across the Bosphorus Strait to the European side of the city.

After boarding the ferry, Ustunel liked to buy tea and sesame bread, and take it outside on the deck. He’d stand at the railing, feeling the spray of the water on his face and listening for nearby boats. Ustunel has been blind since he was three years old when he lost his sight because of eye cancer — but that never kept him away from the water. He spent afternoons fishing with his father and summers swimming in the Black Sea, where his grandmother had a house.

"And I used to think one day, this strait, Bosphorus, should be more accessible to blind swimmers, blind surfers or sailors," Ustunel said. "People should be able to see blind people using boats."

For the last 11 years, Ustunel has lived in the United States, and he's finally making good on that high school aspiration. He plans to return to his homeland next summer to kayak solo across the Bosphorus Strait.

Now, he’s 37 and still loves being on the water. But instead of going out in another person's boat, Ustunel wants to go out on his own.

Ustunel first became inspired to captain his own boat in high school, while studying Greek mythology. Ustunel remembers one myth about a blind navigator.

"There was this blind king called Phineus, and he used to live on the north side of the Bosphorus," he recalled. "His mission was guiding sailors in the dark safely to the Black Sea from the Mediterranean."

When he was in college, Ustunel met an American woman whom he eventually married. After moving to the US so the couple could be together, they decided to leave his wife's Midwestern hometown and settle in San Francisco, in part because of Ustunel's love of the ocean.

The pair started kayaking in a two-person boat, and his wife would steer. Sometimes, Ustunel would kayak solo, but he'd go along with a group and ask a sighted friend to wear bells so Ustunel could hear and follow as they paddled across the water. But his desire to kayak independently persisted.

Earlier this year, he saw an opportunity that could make this possible: A nonprofit launched a new award to fund blind and visually impaired people undertaking adventures. The Holman Prize for Blind Ambition offers grants of up to $25,000 to accomplish a bold project.

The organization behind the prize, LightHouse for the Blind and Visually Impaired, received over 200 applications from 27 countries. They finally whittled down the winners to three individuals. In addition to Ustunel, the other prize recipients were a Ugandan beekeeper hoping to expand job opportunities for other visually impaired people, and a British baker hoping to travel with her prize money and connect people across cultures through food.

LightHouse has been able to fund these creative projects after receiving an unexpected gift of $125 million from a Seattle businessman upon his death.

For Ustunel, the money will help him buy the right kind of kayak and the instruments he will use to navigate. He's documenting his training process on his website, where he calls himself "The Blind Captain."

So, how do you kayak if you can't see?

Ustunel says the first thing is to use your other senses, which can convey lots of information. When he nears the shore, Ustunel smells plants or flowers. If it's rained recently, the land produces an earthy scent from the soil, called petrichor. If Ustunel is out on the open water, he will sometimes sense a smell similar to watermelon. He thinks this might be a kind of seaweed scent.

Ustunel also uses his ears to locate people, construction or cars. These sounds mean he's close to shore. When he's out farther in the water, he mostly just hears birds.

But to cross the Bosphorus, Ustunel will need more than just his senses. His journey will be just over 3 miles, but the strait is one of the busiest shipping channels in the world. The waters are dangerously crowded with huge freighters and tankers, alongside small ferries and fishing boats — and the currents are strong.

So Ustunel will need gadgets that can tell him exactly where he is and what’s around him. 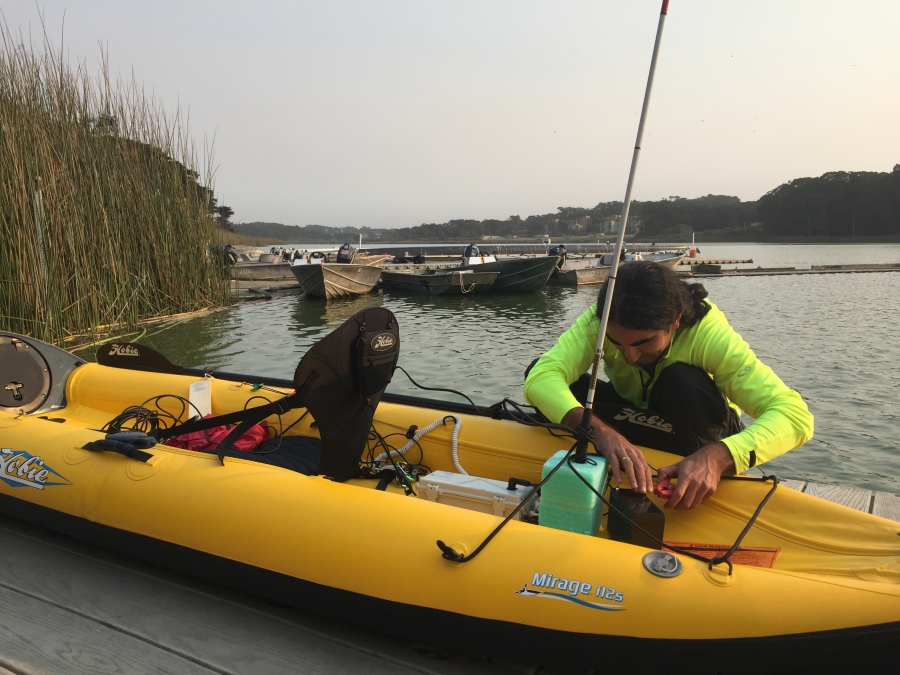 To prepare, Ustunel is training in a variety of waterways around Northern California, including Tomales Bay, San Francisco Bay and Lake Merritt in Oakland. And he's testing new technology every time he goes out.

On a recent Tuesday, he launched on the calm waters of San Francisco's tiny Lake Merced. He got there by taking a public city bus for people with disabilities. Once at the lake, he rolled his suitcase to the end of the dock and popped it open. Inside he had a black-and-yellow kayak, neatly folded up.

After inflating the boat, Ustunel took his white-and-red cane and stuck it on the back, like a flagpole. This cane is a symbol, he said.

With his red life jacket zipped up, he climbed into his boat and pushed off.

On the other side of the lake, there was a loud road, which Ustunel used as a landmark, steering toward the sound.

Then he pulled out his smartphone. Like all his devices, he has it set to play at double speed for maximum efficiency. In a fast, robotic tone, the GPS device on his phone told him his coordinates, and Ustunel decided to head south.

In addition to the GPS on his phone, Ustunel placed another on the back of his kayak, just behind his seat. He refers to that one as "Mr. Beep." It beeped slowly and steadily when Ustunel was correctly following a pre-programmed route, and quickly to alert him if he drifted.

Ustunel's kayak is powered by foot pedals, which allow him to keep his hands free.

On the water, he also tested a sonar used by fishers to find fish. Ustunel instead used this to scan the water in front of him for objects or debris.

And when he wanted even more information, Ustunel opened an app on his phone called “Be My Eyes.” It connected him to a sighted person, a volunteer who could be anywhere in the world, who could look through the camera on his phone and see for him.

This particular volunteer was in Texas.

"Hi," responded Ustunel. "I am on a kayak on a lake and I want to know what’s around me. I hear a street on my right. Can you see the street?"

The tools Ustunel uses are prototypes. He is providing feedback to engineers who will tweak the devices so that other people who are blind can use them, too.

Ustunel is not a stranger to helping other blind and visually impaired people access opportunities. This is what he does in his day job as a teacher of visually impaired students in San Francisco public schools.

On a recent school day, he met privately with Ethan, a 15-year-old whom Ustunel was helping write a letter to the city about an intersection that's not accessible for blind people. Together Ustunel and his student went over a draft of the letter. A computer program read it out loud. The pair made tweaks and spellchecked the document. Then, they agreed, it was ready to send.

In part, Ustunel says he teaches because when he was young, he had trouble finding role models. He took whatever he could get — even mythological Greek kings.

Now times have changed, and it’s much easier to find blind heroes because they’re walking around us every day. Or maybe they're kayaking on a nearby lake. Just look for the white-tipped cane jutting out the back.