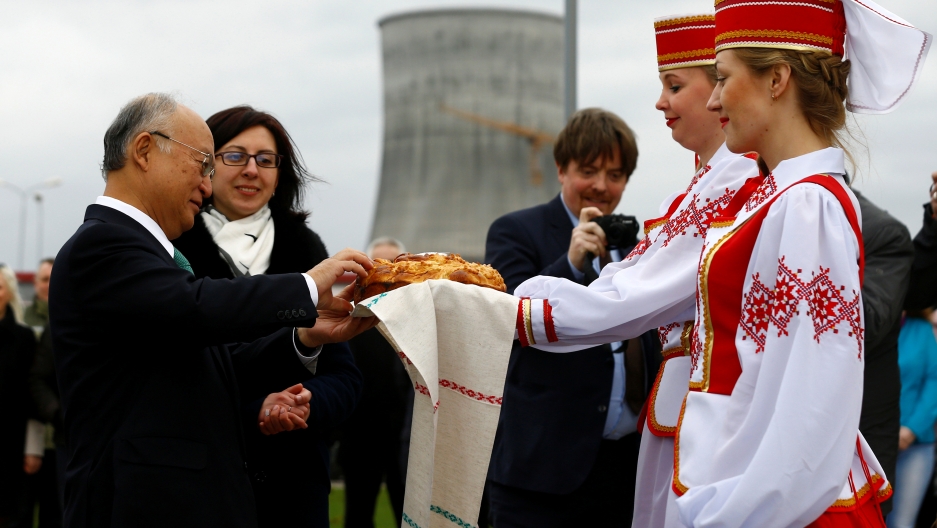 Belarus has a plan to build a nuclear power plant funded by the Russian government. Twelve miles across the border, Lithuania has serious concerns about what they think is a growing nuclear threat.

Lithuania is a tiny country that still relies on Russia’s power grid for electricity, and the memory of the 1986 Chernobyl nuclear disaster also looms large in the region.

Besides questions about the environmental and safety standards, says reporter Reid Standish, Lithuania fears the possible geopolitical impact of the Ostrovets power plant.

“Lithuania was the first country to declare independence from the Soviet Union,” says Standish, “and it has a deep-seated suspicion of Moscow, and by association, Belarus, because it sees Belarus as a client state of the Kremlin.”

You can listen to The World's full interview with Reid Standish above. Here’s an excerpt from his piece in Foreign Policy:

The tiny country, with a population of just 3 million, imports most of its electricity — and is still connected to the Russian electricity grid. Vilnius worries that the plant is a plot from the Kremlin to elbow into the European Union energy market, using electricity to gain a foothold in the Nordic and Baltic markets to keep the region dependent on Moscow for energy — and thus to keep them under its thumb.

Such intentions were hinted at in a 2013 speech where Belarusian President Alexander Lukashenko reportedly referred to the nuclear plant as “a fishbone in the throats of the European Union and the Baltic states” that they wouldn’t be able to remove.

“From the very beginning, this was meant to intimidate us,” Degutis told Foreign Policy. “Belarus has the right to develop its nuclear energy, but there’s a lot more than that happening here.”

The standoff over the plant has become a symptom of the deep mistrust that countries on Russia’s eastern frontier have about the Kremlin’s intentions, turning commercial competition into a brutal political battleground.

Belarus touts the power plant as a step forward for its own energy security — the country currently imports 90 percent of its energy from Russia — and as a potential revenue stream that could compete in the Baltic and Nordic electricity markets. Minsk rejects Vilnius’s allegations that it has broken international rules and skirted safety barriers during construction. Lukashenko has also accused the Lithuanian government of politicizing the issue for its gain.

Lithuania, like other countries in eastern Europe, has recently weaned off some of its reliance on Russia for energy supplies; it now imports some natural gas from the United States and Norway, breaking the former total reliance on Moscow. But the country’s electricity system still lags behind and fears over Rosatom’s central role in Russia’s energy diplomacy has Vilnius viewing an ulterior motive behind the plant’s rationale and location.