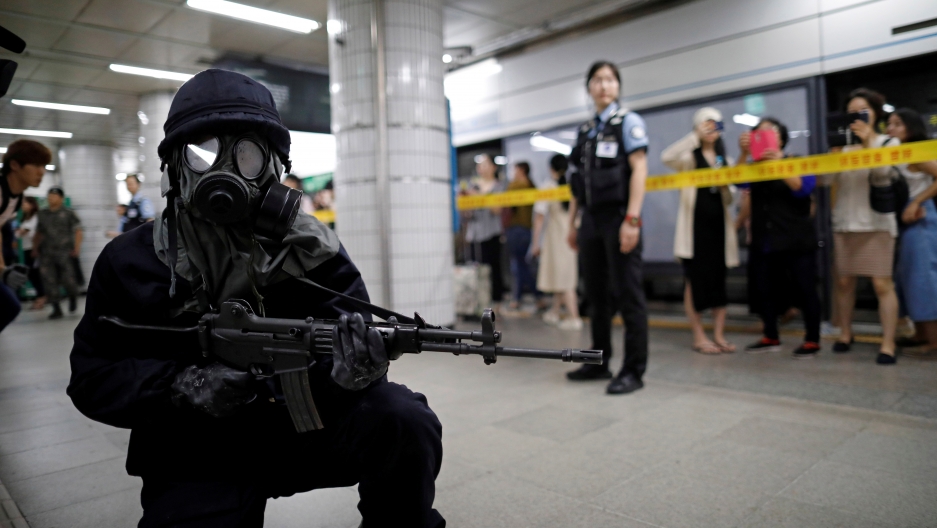 A South Korean policeman takes part in an anti-terror drill as part of the Ulchi Freedom Guardian exercise in Seoul, South Korea, Aug. 22, 2017.

Woo Seung-yep keeps a camouflage backpack loaded with supplies just in case he needs to grab it and go.

Inside are things like a flashlight, canned food and a pair of socks.

Woo runs an online forum with 20,000 members called Survival 21 and consults with local governments on how to prep for disasters. The 44-year-old consultant says he’s trying to help people prepare for war, but most South Koreans don’t take North Korea’s threats seriously. 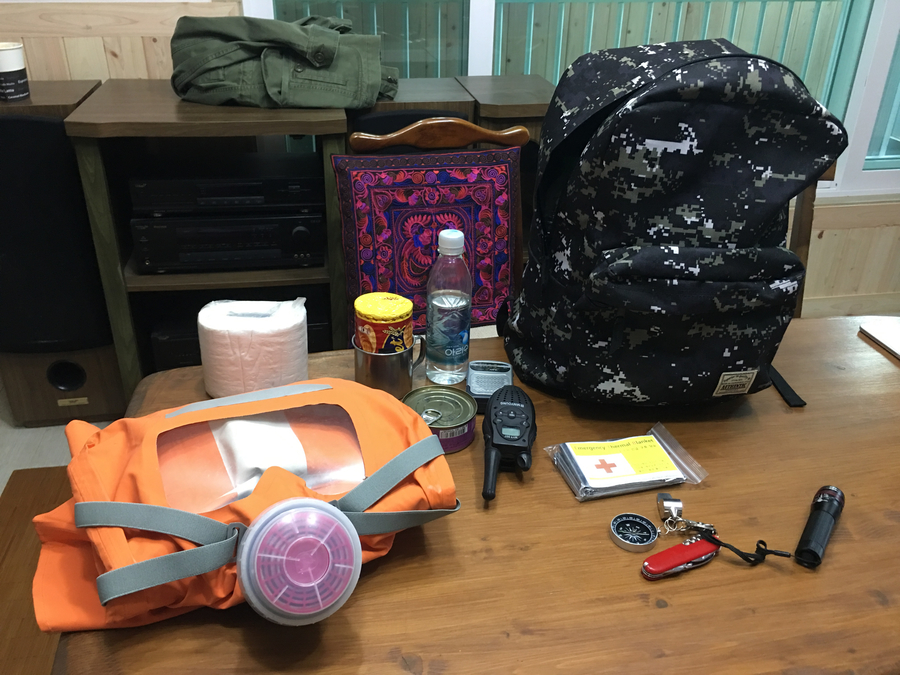 Woo Seung-yep keeps a backpack filled with emergency supplies, including canned food and a gas mask.

While tensions between the US and North Korea have escalated this year, South Koreans have largely remained calm — there’s been no panic or stockpiling of food and water. Despite living only 35 miles from the Demilitarized Zone, residents of Seoul generally go about their daily lives.

Woo says he finds there’s an aversion to discussing the potential of a North Korean strike and even members of his online survival community don’t want to say the word "war."

“There’s a superstition that if you say bad things, those bad things could actually happen,” Woo says. “They’d rather just ignore the possibility of war altogether.”

Woo says he thinks South Koreans are in a state of denial. And some mental health professionals believe he might be onto something.

“There is that protective mechanism in our brain where big threats are ruled out,” says Kim Hyun-chung, a psychiatrist at the National Medical Center in Seoul. “If we’re so sensitive to all the dangers that lurk here, you can’t live here.”

Kim says a lot of South Koreans have suppressed their fear of another Korean War, because deep down they “feel helpless.”

They cope with this anxiety through dark humor or by just trying to change the subject, she explains.

But Kim notes that because of the recent uptick in rhetoric between North Korea’s Kim Jong-un and President Donald Trump, South Koreans are talking more about war and they’re getting worried. She is too.

"I’m avoiding the topic. I don’t want to imagine it," Kim says, but adds it might be time to start talking with her husband and their 10-year-old son about what to do in case of an attack.

Koo Se-woong, publisher of the online magazine Korea Exposé, says he’s also been having conversations about evacuation plans with his parents, who survived the Korean War.

“They tell me that if all people go out into the street during war, they are more likely to die, so we’re just going to stay in our apartment,” Koo says, adding they laugh about it but it still feels “unreal” to him. 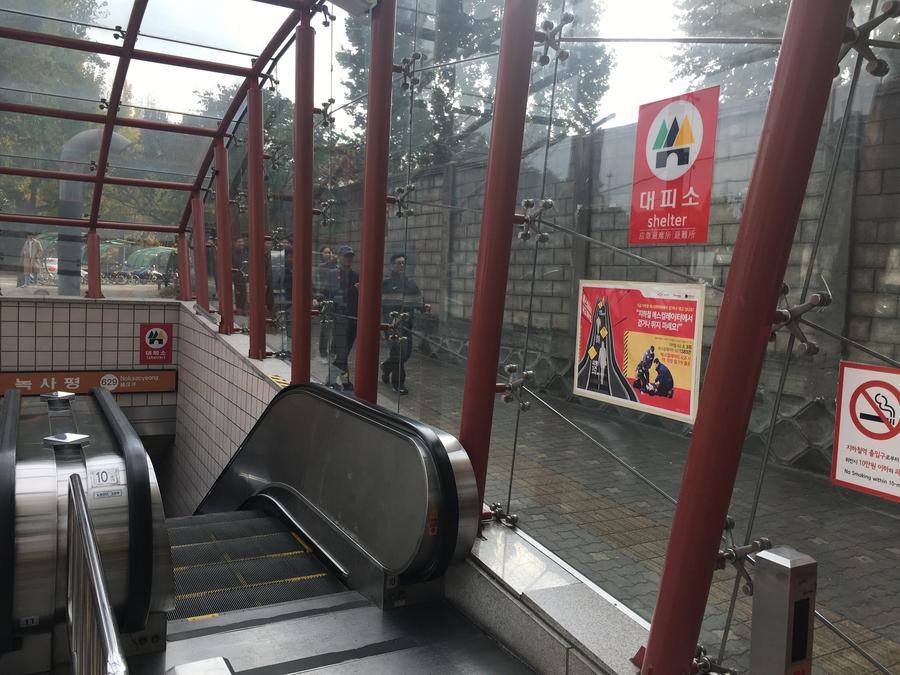 Seoul has designated some subway stations as underground shelters.

Koo says Trump’s threats — to fight North Korea with “fire and fury” or “totally destroy” the country — have crossed a line.

“That’s what’s frightening to many South Koreans and that’s what’s certainly generated concern as well as conversation here,” he says.

A September Gallup poll found that 58 percent of Americans would support a military response to North Korea if diplomacy fails, which Koo says is “deeply troubling.”

“For us it’s a life or death matter,” he says. “But perhaps for Americans, I guess it’s difficult to have the same kind of ideas or worries.”

South Korean media recently reported an increase in sales of war survival kits, which were given as gifts during the Chuseok holiday in early October.

The Seoul Metropolitan Government has also stepped up its emergency precautions in recent months. In August, civil defense drills were expanded to include more of the city’s districts. During the exercises, residents were instructed to practice evacuating into some of Seoul’s 4,100 air raid shelters, which include subway stations and underground parking garages.

But Woo Seung-yep, who keeps a survival backpack on hand, says the government still does not have a solid emergency response plan. And that’s why South Koreans need to take survival into their own hands.

Woo says while the atmosphere on the Korean peninsula is tense, he doesn’t think war is imminent.

“I tell people that while a war might be looming, it's not going to happen right away,” Woo says. “I think a war could break out within a year or so.”

But just to be safe, he recently added a gas mask to his backpack.