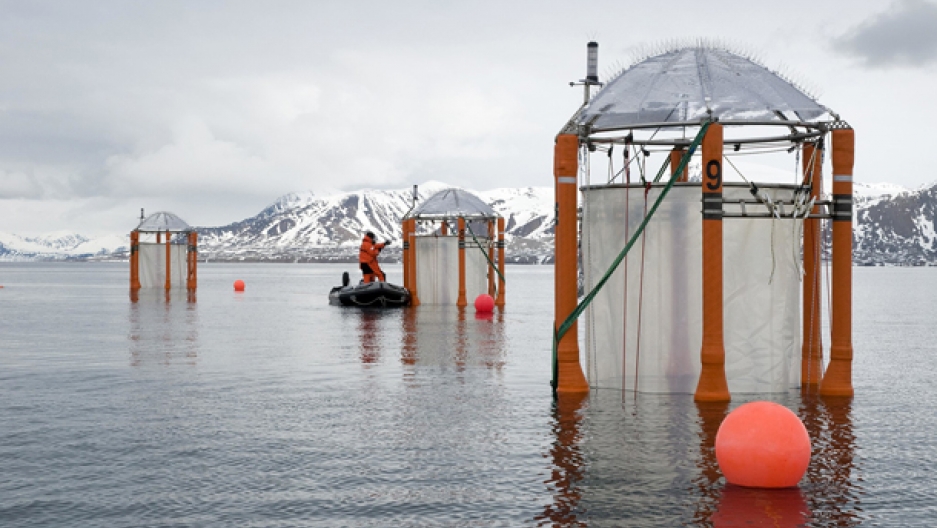 Scientists sample ocean water from mesocosms during an outdoor experiment investigating the reactions of marine organisms to ocean acidification in Svalbard, Norway.

The rising acidity of ocean waters due to increased levels of atmospheric CO2 will have profound adverse effects on sea life, according to a new study.

The report, called “Exploring Ocean Change,” from the group Biological Impacts of Ocean Acidification, or BIOACID, shows rising acidity leads to habitat loss and disrupts the growth and reproduction of sea life.

“All large taxonomic groups in the ocean are affected one way or the other,” says Ulf Riebesell, the lead author of the report and a research professor at the GEOMAR Helmholtz Center for Ocean Research. “It could be by the direct impact of acidification on individual organisms, or it could be indirectly, by changes in the habitat or changes in the food web.”

The report combines a meta-analysis of 380 studies with direct measurements made in ocean water. Riebesell and colleagues developed what they call mesocosms, which are big containers they can put out into the ocean to enclose a body of water. They can simulate future conditions by adding CO2 to these areas in different concentrations.

Scientists measure acidity on the pH scale, which goes from zero to 14. Normal freshwater has a pH of about seven. Before human activity, ocean water had a pH of 8.2. Now it is down to 8.1. This doesn’t sound like a big change, but the pH scale is misleading because it is logarithmic, a type of non-linear scale in which “each increment increases by a factor of 10 (also called an order of magnitude) rather than by equal increments.”

Because pH is a logarithmic scale, moving from 8.2 to 8.1 means that the acidity of the ocean has increased by 30 percent, Riebesell explains. “If we continue to emit CO2 at current rates, by the end of this century we would be at a change in acidity up to 100 to 150 percent, basically doubling the acidity of the ocean in just about 150 years, which would be massive.”

Scientists see some organisms and ecosystems responding already to the increased acidity. Large areas of warm-water coral reefs are struggling with the effects of both warming waters and acidification. “If we don't turn around the present change in ocean warming and acidification, we will lose over 50 percent of the coral reefs in the next couple of decades — so, very fast. Those changes are happening,” Riebesell warns.

In addition, Riebesell and his colleagues are interested in looking at economically important marine species. In the lab, they exposed cod larvae and juvenile codfish to high levels of CO2 and found that their survival is “very much reduced under high CO2-low pH,” he says.

When they inserted the survival rates into some stock-recruitment models, they found that a 50 percent reduction in larvae survival equates to one-quarter to even one-tenth of current stock production in the ocean of the future.

As with climate change, the poorest people of the world will feel the impacts of fisheries lost first, Riebesell says. According to latest UN Food and Agricultural Organization report, about 1 billion people around the world, mostly from poor countries, count on food from the ocean as their most important protein source.

Globally, it is almost impossible to reduce ocean acidification, except by reducing CO2 emissions, Riebesell says. One-third of worldwide emissions go directly into the ocean.

Locally or regionally, there are some possible solutions. We could, for example, save ecosystems like coral reefs by planting algae and seagrasses around them, Riebesell says. When these plants use photosynthesis, they take up CO2 from the ocean, which would increase pH in the seawater. We could even try putting lime in the waters around these coral reefs, which would also raise pH levels slightly.

But these are just temporary solutions. “We already know what has to be done,” Riebesell says. “[R]educe CO2 emissions.”