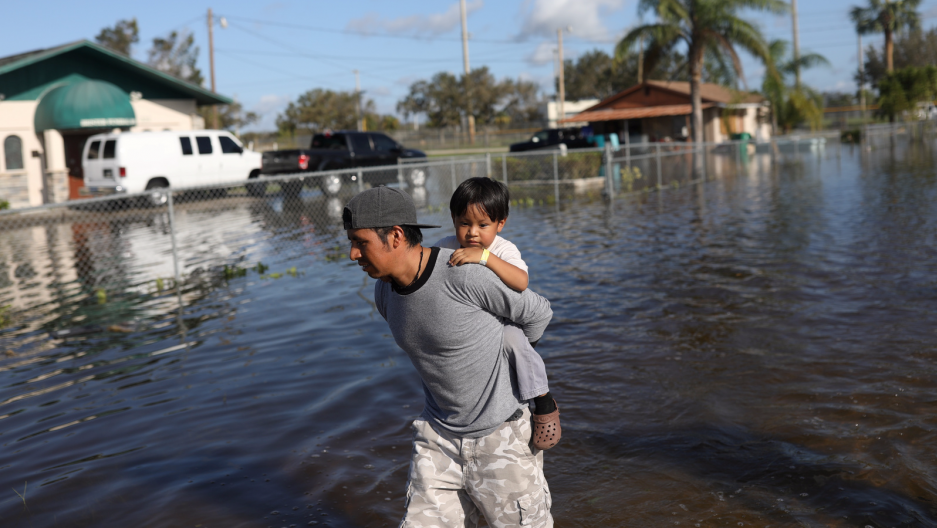 Wilson Pérez carries his son, José Miguel Pérez, 4, down their street that was flooded after the passing of Hurricane Irma in Immokalee, Florida, Sept. 12, 2017.

The US government released Friday a major scientific report that says climate change is "extremely likely" to be caused by human activity and will get worse without major cuts to carbon emissions.

The findings of the federally mandated report were approved by the White House, even though they are starkly at odds with the position of President Donald Trump, who has labeled global warming a Chinese hoax and named fossil fuel ally Scott Pruitt to head the Environmental Protection Agency.

The Climate Science Special Report spans more than 600 pages and is part of a larger report known as the Fourth National Climate Assessment, which is being issued in draft form for public comment.

Based on "a large body of scientific, peer-reviewed research," global annually averaged surface air temperature has increased by about 1.8 Fahrenheit (1.0 Celsius) over the last 115 years (1901–2016), it says.

"This period is now the warmest in the history of modern civilization," said the report.

Since the last report of its kind was issued in 2014, "stronger evidence has emerged for continuing, rapid, human-caused warming of the global atmosphere and ocean," the text said.

It was compiled by the National Oceanographic and Atmospheric Administration, with contributions from NASA, the Department of Energy and other federal agencies. Co-authors included more than 50 scientists from government agencies, universities and the private sector.

"I am quite confident to say that there has been no political interference in the scientific messages from this report," co-lead author David Fahey, director of the chemical sciences division at NOAA, told reporters on a conference call.

"I think whatever fears we had were not realized," he added.

"The word interference might have been a threat, but it never materialized. This report says what the scientists wanted to say."

After examining long-term climate records and data going back thousands of years, the report said that in the modern era, "average temperatures in recent decades over much of the world have been much higher, and have risen faster during this time period than at any time in the past 1,700 years or more."

By the end of the century, "without major reductions in emissions, the increase in annual average global temperature relative to preindustrial times could reach 9 Fahrenheit (5 Celsius) or more," it said.

Sea level can be expected to rise "several inches in the next 15 years," and one to four feet by century's end, it said.

The findings came as no surprise to climate scientists.

"This isn't new," said Peter Gleick, president-emeritus of the Pacific Institute and a member of the US National Academies of Science.

"This is news only because Trump couldn't censor it," he said on Twitter.

The Trump administration has repeatedly denied or downplayed the role of fossil fuels in global warming.

EPA chief Pruitt shocked scientists earlier this year when he argued in a media interview that carbon dioxide was not a primary contributor to global warming.

However, the White House cleared the report for release, NOAA said.

NOAA said the report "serves as the foundation for efforts to assess climate-related risks and inform decision-making about responses."

The findings do not contain policy recommendations, but serve to inform future strategies.

Democratic Senator Al Franken of Minnesota and eight of his colleagues this week sent a letter to Trump asking "what safeguards are in place to ensure that the National Climate Assessment and the Climate Science Special Report give fair and accurate summations of the latest climate science without political interference."

The senators also asked how the Trump Administration plans to address the report's findings.