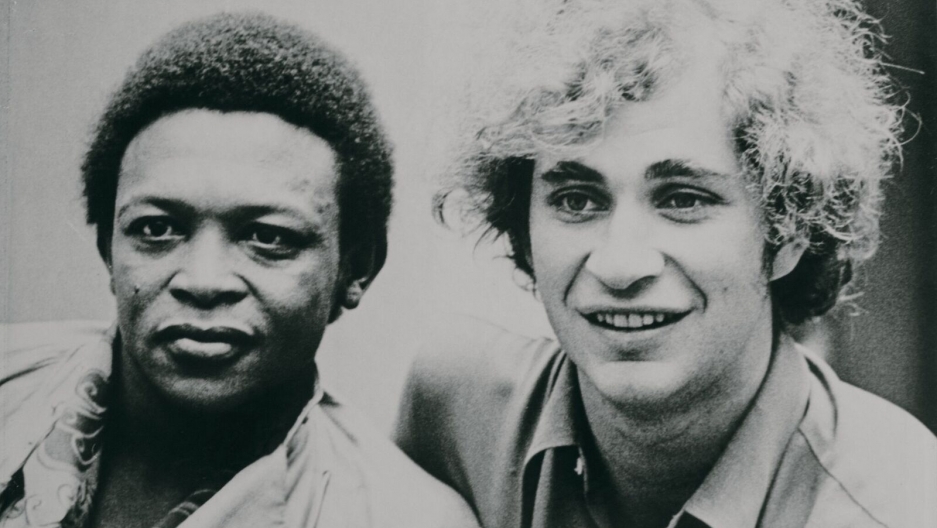 Hugh Masekela and Stewart Levine in 1974.

In the fall of 1974, a boxing match between Muhammad Ali and George Foreman took place in Kinshasa, Zaire.

The fight was dubbed "Rumble in the Jungle." It was epic then, and historic now.

Muhammad Ali's robe from the fight is at the Smithsonian in Washington, DC. Books and films, including the 1996 Academy-awarding winning documentary "When We Were Kings," have been made about the bout.

The fight was originally scheduled for September but had to be postponed a month. A three-day music festival was set to coincide with the fight but couldn't be rescheduled, so the concert had to go ahead as planned.

The festival itself, though, has taken on a life of its own. It's the focus of a documentary released a few years ago called "Soul Power." "Soul Power" focused on the American soul and Latin artists who played in Kinshasa.

"We had this incredible array of who's who in Black American music at the time," he says.

There was James Brown, B.B. King, The Spinners, Bill Withers and the Fania All-Stars.

"Soul Power" is a trip back in musical time, but noticeably absent from the documentary are the African artists who performed.  Artists like Tabu Ley Rochereau, Franco and the TPOK Jazz Ensemble and Miriam Makeba all shared the stage with King, Withers and the like.

These musicians were super well-known on the continent, but less so in the US. But now that's changing.

A few months ago, a double-CD came out that highlights the African artists called Zaire '74.

With this release, Stewart Levine says they're righting a wrong. "It was us waking up to what we had not really fulfilled, which was to at least have this music heard. And it is very much an example of what was missed during those years. You know, just unawareness by all audiences toward this music. ... It's us righting our wrong. And also the audience being able to hear just how staggeringly great these performers were, particularly on that night."

South African trumpeter Hugh Masekela was Stewart Levine's counterpart in Africa. Masekela curated the African acts for the festival and until he helped pull together this release, even he hadn't heard the tapes since the '70s.

"Listening to Zaire 74, we were blown away because we didn't know, 40 years later, how dynamic the music was," he explains. "And how different it was from the regular music that people expected. ... These people really prepared for the festival."

So now the question is, could there be a film that focuses on the African musicians?

"I don't think so," says Levine. "There isn't enough suitable footage or real interest, to be honest with you, to do a third one. The idea is, I don't know, if you close your eyes and listen to this music I think you end up there. If you close your eyes you're in Zaire."

So we'll have to savor the release of Zaire 74.