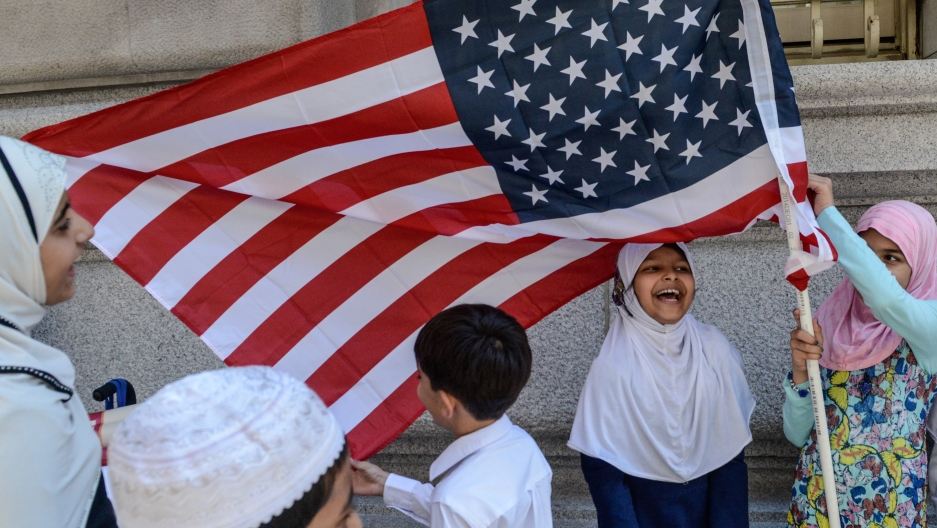 Children play near an American flag during the annual Muslim Day Parade in New York City.

The suspect in the New York City terrorist attack reportedly shouted the Arabic phrase meaning “God is greatest” after driving his truck down a bike path on Tuesday, killing eight people.

It was cited — and repeated — as evidence that the attack was linked to Islamic terrorism long before officials had the chance to investigate, and it’s not the first time people in the West have assumed that the phrase signifies ill intent.

But to the vast majority of Muslims, Allahu akbar is an everyday expression, something said frequently in casual conversation.

“I say it like a hundred times a day,” says writer Wajahat Ali.

Five times a day, it's heard in prayers at mosques, but it’s also a “lexical Swiss Army knife,” as Ali puts it — a way expressing gratitude, congratulations and appreciation.

“I said Allahu akbar, literally, last night while watching the Golden State Warriors come back and beat the Spurs,” Ali said, then laughed. “I was like 'Allahu akbar! Thank you, Steph Curry!'”

The phrase, though, in the minds of some, has also become a kind of shorthand for terrorism that obfuscates how commonplace the phrase is.

The attack in New York prompted Ali to try to inform people what he actually means when he says Allahu akbar.

“I’m not doing anything wrong, and I refuse to let haters and extremists hijack the normalcy of our daily lives. If that means I have to work a little bit harder just explain it to people, so be it,” he says.

There was one bright spot in all the coverage, at least. Several people noted on social media that TV broadcasters were mispronouncing “Allahu akbar.”

I just saw a TV reporter pronouncing it as ‘aloo akbar’ which literally translates to ‘potatoes are the greatest’ https://t.co/6qLi52fU2y

“If we can't agree on Allahu akbar, I think most Americans can agree on aloo akbar,” Ali jokes. "Who doesn't like potatoes?”

You can listen to The World's full interview with Wajahat Ali above.