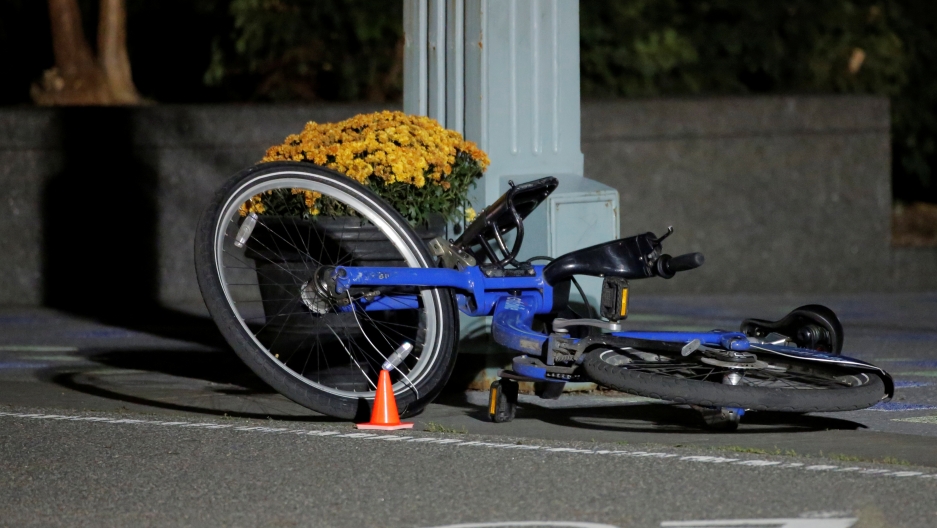 A bike lies in a bicycle lane following a truck attack on the West Side Highway in Manhattan, New York, on Nov. 1, 2017.

It’s the worst mass killing in New York City since 9/11. A man drove a pickup truck into a bike lane and a festive crowd on Halloween night, killing eight and injuring roughly a dozen people.

The suspect was shot and critically injured by police. On Wednesday, he was charged with federal terrorism offenses.

President Donald Trump has made a number of comments and tweets, including false statements.

Trump called the suspect an "animal" and said he would consider sending him to Guantánamo, saying the US justice system is "a joke" and an international "laughing stock."

The president also said he was taking steps to eliminate the visa lottery program, under which the suspect entered the country in 2010. In a tweet, Trump also falsely blamed Sen. Chuck Schumer of New York for that program.

Schumer accused Trump of politicizing the tragedy. The president has been pushing immigration reform for several months, and on Wednesday repeated his idea that the US move to a merit-based system of immigration.

The terrorist came into our country through what is called the "Diversity Visa Lottery Program," a Chuck Schumer beauty. I want merit based.

The suspect has been identified by the New York City Police Department as Sayfullo Saipov, a 29-year-old immigrant from Uzbekistan. Congressional leaders have confirmed Saipov entered the United States under the visa lottery program, also known as the diversity lottery. He is a lawful permanent resident of the United States.

The NYPD says this was a terror attack, as the suspect left notes in the truck supportive of ISIS. Law enforcement also point out that the extremist militant group has long advocated the use of vehicle attacks against civilians. The suspect shouted “God is Great” in Arabic as he exited the truck. However, ISIS has made no claim of responsibility.

“That doesn't surprise me,” says Rukmini Callimachi of The New York Times. “In general, ISIS has not claimed attacks when the perpetrator is in custody or is on the run. For example, during the Paris attacks, there were 10 attackers. ISIS claimed all of them except for the only one who got caught.”

Juliette Kayyem, a former assistant secretary of the Department of Homeland Security, says even with Saipov's terror charges, there are currently no legal grounds to send him to the detention facility at Guantánamo, Cuba, as the president suggested.

Kayyem also thinks the president is wrong to slam the immigration system in response to the attack. “If the United States thinks that this is an international problem, it's going to miss the mark. [Saipov has] been here since 2010, with, what we can tell so far, no touch points to the FBI or to counterterrorism and intelligence agents.”

She points out that everyone admitted under the diversity program is thoroughly vetted. “All it does is make someone eligible for entry. So it just means that you can get into the line. The line still exists. There's still a vetting process. There's still a review making sure that you know the reasons that you're coming are valid.”

Uzbekistan is a former Soviet republic in Central Asia, with an authoritarian government intolerant of Islamist radicalism. Many Uzbeks have joined radical movements overseas.

“The former Soviet republics are actually the region of the world that has sent the most foreign fighters to join the Islamic State in Iraq and Syria,” says Callimachi of The New York Times. “That doesn't mean that this person, by any means, went and fought for the group in Iraq and Syria, but it does mean that he comes from a country that has had a large share of people join this group.”