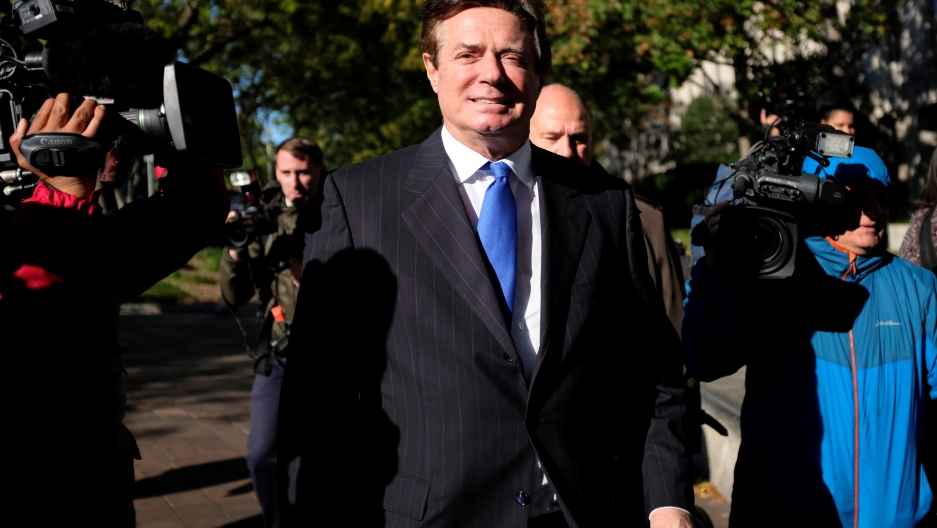 Former Trump 2016 campaign chairman Paul Manafort leaves US Federal Court after being arraigned on 12 federal charges in the investigation into alleged Russian meddling in the 2016 US presidential election in Washington, Oct. 30, 2017.

With the indictment of three Trump campaign officials — including former campaign chairman Paul Manafort — injecting new drama into special council Robert Mueller’s investigation into Russian interference in the US elections, the Kremlin took a different view of events: The news fell just short of a full exoneration.

Kremlin spokesman Dmitry Peskov noted the “absence of Russia” from the indictments while repeating Moscow’s often issued insistence that the charges were false.

Allegations of Russian meddling in the elections were “laughable, unqualified, groundless and unsubstantiated,” said Peskov in a call to reporters. Rather than Russia, he added, the indictments proved “other countries” were involved.

Indeed, Russian coverage has been quick to point out that rather than proof of Russian interference in the US elections, the indictments pointed to high-level corruption in neighboring Ukraine  —  a favorite Kremlin punching bag.

Speaking on Channel 1, Foreign Ministry spokeswoman Maria Zakharova put it bluntly: “They stole in Ukraine, but the guilt lies with Russia.”

“The entire world establishment acknowledges that the level of corruption in Ukraine is incommensurate with any other country,” she added.

While Mueller’s indictment indeed focuses on alleged money laundering schemes involving Manafort — and his business partner Rick Gates — in Ukraine, that work was done on behalf of Viktor Yanukovych, a Moscow-backed politician whom Manafort began advising in 2005.

Under Manafort’s tutelage, Yanukovych went from the losing side of the country’s 2004 Orange Revolution to winning the presidency in Ukraine in 2010.  Then came the Maidan square popular street uprising of 2014 that drove him from power — and set up a Russia/West showdown over Ukraine’s future that still reverberates today in the form of Russian-annexed Crimea, Western sanctions, and the still-simmering war in east Ukraine.

Related: Trump cozying up to Russia? Not in Ukraine.

Never mind that Yanukovych fled Ukraine for Russia, where he still resides; Kremlin surrogates seized on the latest charges as a chance to flip the narrative.

“The paradox is that Manafort didn’t work with pro-Russian Yanukovych. Yanukovych was always hardline pro-Ukrainian,” argued Sergey Markov, a political analyst close to the Kremlin, in a post to Facebook. “And Manafort was the key figure who pulled Yanukovych away from Russia to the side of the US. And now they’ve jailed him for it. Very well then.”

Poking holes, Papadopolous and the professor

Just as they have done with the US intelligence service’s declassified report on alleged Russian interference in the elections, Kremlin officials eagerly poked fun at errors in the latest indictments as signaling the amateur quality of the investigation.

But special scorn has been leveled at former Trump campaign foreign policy advisor George Papadopoulos, whose guilty plea and cooperation with investigators have been regarded by some US legal experts as the bigger threat to the Trump presidency.

Related: Who is George Papadopoulos?

Russian officials openly mocked Papadopoulos’s sworn affidavit — with its stories of meetings with “the professor,” an unnamed Russian Foreign Ministry official, and a woman initially identified as “Putin’s niece.”

“A 'professor with ties to the Kremlin'? Ridiculous,” wrote Alexei Pushkov, the former head of the Russian senate’s international affairs committee, on Twitter. (Foreign Ministry officials have since identified the mysterious Russian diplomat as Ivan Timofeev, a researcher from a Moscow foreign policy think-tank).

"Russia probe"paradox: neither Trump,nor his campaign or Russian officials are mentioned. A "professor with ties to the Kremlin"? Ridiculous

Russian coverage, instead, has largely dovetailed with the Trump administration and conservative US media — arguing the real Russia scandal surrounds Hillary Clinton and questions over who funded the Fusion GPS political research firm’s now infamous — and largely unproven — salacious “dossier” on the Trump campaign.

But talking points between the Trump administration and its supporters and the Kremlin only go so far: President Trump insists Democratic connections to the Fusion GPS “dossier” prove collusion between Russia and the Clinton campaign.

In Moscow — where Kremlin officials have never strayed from denials of interference in the US election — that goes over like a big "nothing burger."