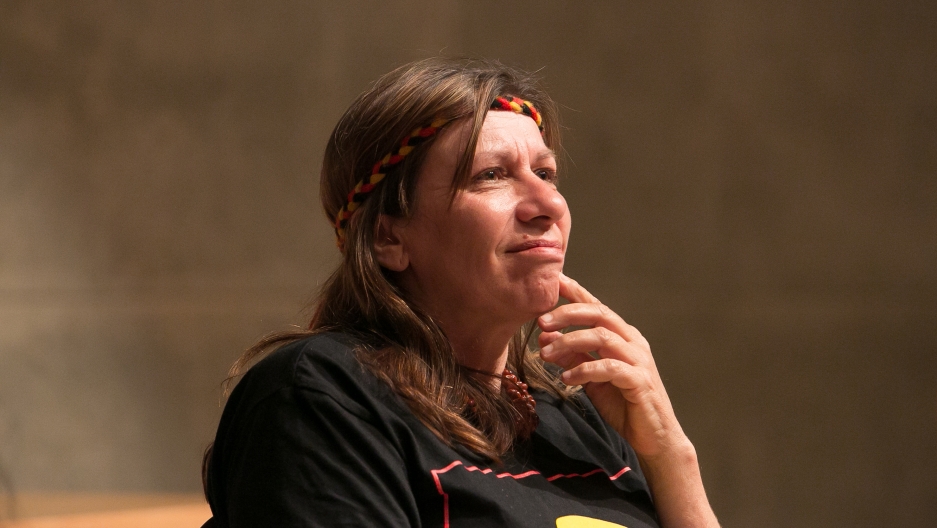 When Ali Cobby Eckermann was a teenager, she ran away to the desert in central Australia. “It was either running away to the desert or going to prison because I was starting to get into a lot of trouble,” she explains. “And I knew I couldn’t control my behavior. And I left because I didn’t want to see the hurt in my adoptive parents’ eyes.”

Later as an adult, Eckermann would put all that pain into writing. Today, the 54-year-old is one of Australia’s most celebrated poets. Earlier this year, she became the first aboriginal Australian to get the prestigious Windham-Campbell Prize, which Yale University bestows annually for excellence in writing. Eckermann writes about her childhood and adolescence and being part of Australia’s Stolen Generations, which refers to the 100,000 aboriginal children who were removed from their biological families by the government and sent to boarding schools and church-run missions.

In her poem, “Ngingali,” she describes the anxiety of growing up without her biological mother. “My mother is a granite boulder/I can no longer climb nor walk/around/her weight is a constant reminder/of myself/I sit in her shadow/gulls nestle in her eyes/their shadows her epitaph/I carry/a pebble of her in my pocket.”

After being taken from her mother, as a baby, Eckermann was adopted into a family of white farmers in southern Australia. She says they were kind to her, but there were larger, looming issues they could not shield her from. She was sexually assaulted by a family friend when she was young. And as an aboriginal child growing up in a white community, she was bullied. By the time she was a teen, the alienation was unbearable. She’d spiraled into alcoholism and drug addiction. At 18, she gave birth to a boy. A single mom, Eckermann felt judged by the people in her community.

She put the baby up for adoption and left for central Australia to find her birth family. There, she says, she learned to honor her own grief and the pain of everything that had happened to her and to the women who came before her. She began talking through things and writing about it. “You have to honor it and you have to feel it, and it hurts. And people will stop at a level of pain, and that’s where they become stuck. And you have to feel every iota of it to get to the other side. My poetry came out of honoring my grief.”

Eckermann was able to reunite with her biological mother a couple of decades ago. She describes it with a sweet sadness. So many of the Stolen Generations never even got that. But Eckermann and her mom missed out on an entire life together. Her mother’s death shortly after their meeting eventually led to her 2015 poetry book, “Inside My Mother.” “My mother screams as I touch her hair/attempting to brush away the coarseness with my hands/to entwine twigs filled with leaves into her locks/a tiara of green to soften her face/and our tears dry now my mother is frailing/she talks only to those who have gone before/no longer seeing my love, no longer needing,” it says.

For her adoptive mother — the woman who raised her, Frieda Eckermann — the poetry represents a different sorrow. “It really is sad now to see mum’s concern that I identify as a Stolen Generation person,” Ali Cobby Eckermann says. “Because in her heart, she wasn’t stealing anything. She was ... offering a home to children that she was told weren’t wanted. That’s our common bond. It’s that mum, Frieda, was tricked into believing something that wasn’t true. And my own birth mother was tricked out of keeping her firstborn child, which was me.”

Ali Cobby Eckermann has been able to break that cycle. She has a relationship with her firstborn son, the boy she gave up for adoption. He’s a grown man now, and they’ve reunited. He, along with Ali Cobby Eckermann's younger daughter, accompanied her to the US, to collect her award.

She says that while she was honored to receive the prize, it's also troubling — the fact that she feels safer here than in Australia, which she says is still not accepting of aboriginal people. “In Australia, we could be walking down the street and the cops can pull us over, and search us, and belittle us, and frighten us. And there doesn’t need to be anything we’ve done. It’s just the fact that we’re aboriginal people. We are the oldest living cultural continuum in the word. And we’re tired of living under the boot of Australia.”

“Get over it,” is what she says her people have been told over and over through time. So, ultimately, Ali Cobby Eckermann says, expressing grief, writing poetry and telling stories is her form of resistance.

The Windham-Campbell includes a $165,000 prize. Ali Cobby Eckermann says it gives her a chance to build a home for herself and the family she’s finally reunited with.