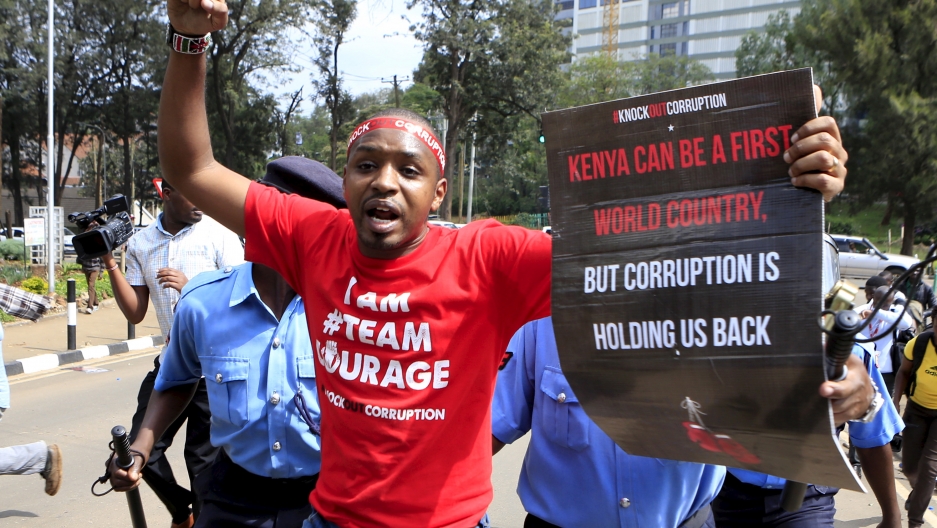 Kenyan activist Boniface Mwangi is calling out his country's leaders as "tribal kingpins" that he says are taking the country to the brink of disaster.

He and thousands of others have taken to the streets to protest corruption and what they say is an electoral system that exacerbates Kenya's ethnic divisions.

"I went to protest against police violence and got shot with a tear gas canister," notes Mwangi, with more than a touch of irony.

Tensions are especially high in Kenya after last week's presidential election re-run. President Uhuru Kenyatta has now been declared the winner, with 98 percent of the vote. Challenger Raila Odinga boycotted the balloting, arguing it would not be free and fair. He said that about the original vote, too.

All of which has left many Kenyans worried about a return to the sort of post-election violence that plagued Kenya a decade ago.

"There are fears that the country is going to burn or may go back to what happened 10 years ago when more than 1,000 people were killed, and a half a million people were displaced over an electoral dispute," Mwangi says.

President Kenyatta has overwelming support from the country's large Kikuyu ethnic community, while challenger Raila Odinga has the backing of many Luos.

Mwangi says concerns about whether or not to identify with his own ethnic or tribal group has weighed heavily on his family. So he and his wife took what they consider to be a step to overcoming those divisions, by giving their three children names that weren't traditional among the Kikuyu community. Instead, they chose names that were Zulu, Arabic and Luo.

"The kids are too young to understand this tribal nonsense," he says. "But I hope that I'm going to fight tribalism with other people and by the time they're old enough it won't matter what tribe they are, or what is their name, they'll be judged by their character and their morals."