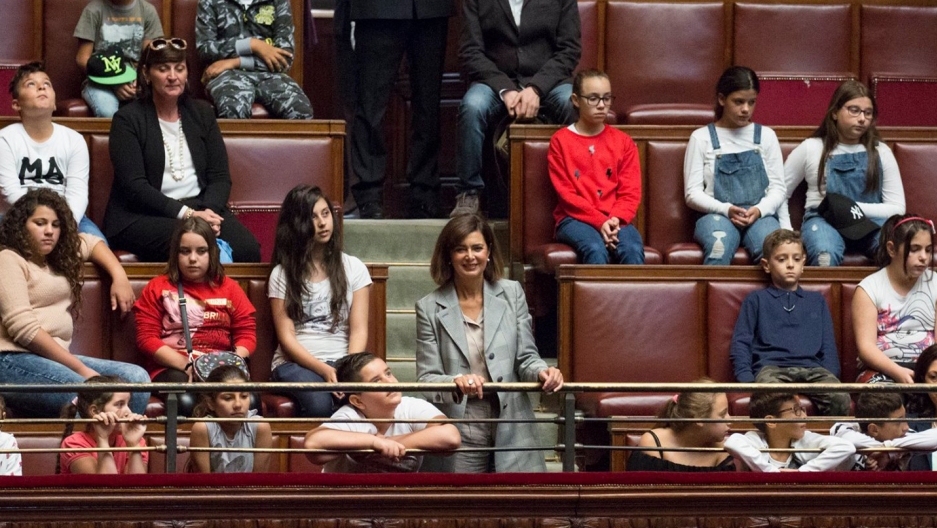 President of the Chamber of Deputies Laura Boldrini welcomes students from Sicily to the Italian Parliament on Oct. 2, 2017.

Fake news is everywhere. Americans learned that last year, when the spread of false news stories and misleading information on social media played a role in the 2016 presidential election.

But the problem isn’t limited to the US. It’s a big concern for leaders all over the globe. The question is, what do we do about it?

One of Italy’s top elected officials unveiled her answer to that question today. Laura Boldrini, president of the Chamber of Deputies in the Italian Parliament, helped create a new program to teach high school students how to detect fake news and limit its spread on social media. The program was launched today.

President Boldrini spoke to The World's William Troop about the program.

President Boldrini, why do you think a program to teach high school kids about fake news is needed?

I think this is needed because fake news represents a fact for our society. Fake news stories are like drops of poison into the water that we drink every day, and we end up infected without even realizing it. Today most of our young people find their information on the internet, so I think it's very important to give them both technical skills as well as critical thinking. This is to help them understand what is true and what is false on the internet. There is research out there that shows that more than 80 percent of students didn't recognize the difference between an article and advertising. So I think it's important that our citizens be able to recognize what is true and what is not true.

Can you describe some of the main parts of the program, which goes into effect this week in 8,000 schools in Italy?

The program is taught together with the Ministry of Education. And we would like to involve students and teachers together. So we start by telling them simple things, which for us may be obvious but which are not always obvious for those who are younger. For example: Do not share unverified news. Because, you see, many fake news stories getting shared just because people liked the content. But the users don't know if the story is true or not. They are not interested, or maybe they haven't checked. Also, we ask the students to ask for evidence before taking any action on a news story that seems strange. So just stop and ask for sources. Then we want to remind students that the social networks can be manipulated. So we ask them to be aware of the risks involved. And at the end of [the] project, we ask students to create their own blogs and also to produce videos where they can expose the fake news, so they can explain how they uncovered it and contribute to inform other people.

This may sound like a lot of homework to the average teenager. Do you think you can convince young people to actually take these steps?

Well, if you involve them through the tools that they like already, I think yes. Because if in class you create a video or start a blog on this specific issue, I think it can become sort of a competition among the students. And we would really like for them to become sort of fake news hunters, so they can be an active part of the internet.

A lot of people blame companies like Facebook and Twitter for creating this climate in which fake news proliferates. Facebook is involved in your program, but do you do you think Facebook is doing enough to counter what is happening on its platform?

Google and Facebook are both involved in our project. Here in Italy, there are 30 million Facebook users. That is half of our population! And I think if it’s true that they want to preserve Facebook as a tool that is connecting people — where there is no space for fake news and hate speech. I think they should do more, much more. I have advised Facebook, for instance, on several occasions to open an operational office in Italy. I think it would be quite useful here to have an office which can be contacted by users, which can act immediately to limit hate speech and can take action when it's needed. Instead, we don't have any operational office here. So I think if it's true that they don't want hate speech in their platform they should prove it by investing money, technology and human resources. And so far, at least here in Italy, this hasn’t been done.

What is your biggest worry about fake news and where it comes from? Is it a state actor like Russia or is it something else?

My concern is that those who place fake news in the internet want to cheat people and change public opinion based on lies. And this is very dangerous for democracy. This can really change the fate of countries and of democracy. Because behind the decision to create fake news, there is an agenda to manipulate people and make them believe what is not true. So can we sit there without taking any action? And I think that education is the most important tool in order to give people the technical skills and critical thinking to defend themselves from lies and from those who want to change the world through lies.