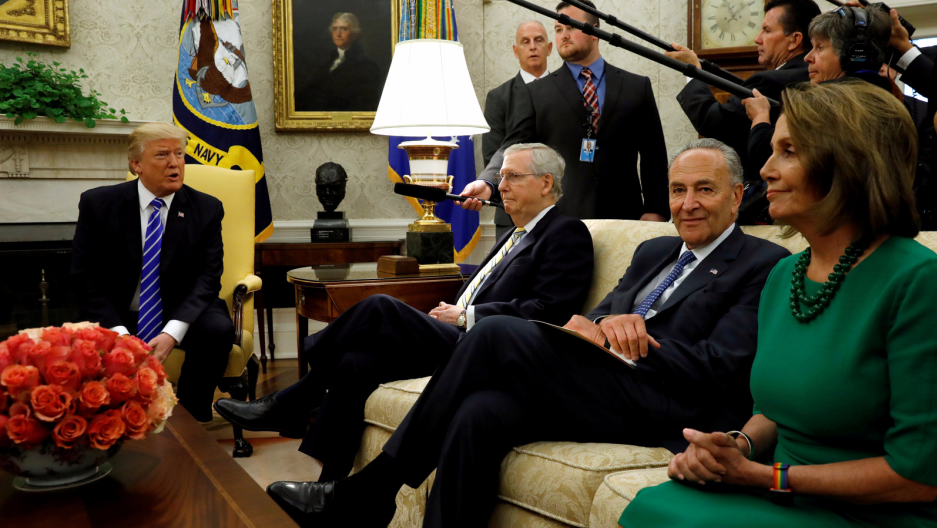 Americans are pretty fed up with Congress. Gallup tracks the approval ratings for members of the US House and Senate and they’re, uh, not good. Over the last eight years, they’ve hovered between 15 and 20 percent. Ratings haven’t cracked 30 percent since August 2009.

People are frustrated by the gridlock caused by Congress’ unwillingness to compromise. And while it’s fair to say partisanship has strained how much legislation is passed (look at Congress’ recent productivity rates as proof), can we say bipartisanship is definitively dead?

Ross Baker, a professor of American politics at Rutgers University, says it’s not flatlining. Throughout history, bipartisanship has come and gone in waves.

“I think the periods of bipartisan cooperation are the rarities,” Baker says. “They’re like the eye of the storm.”

One of those brief periods of unity came earlier this year. Republican Sen. John McCain cast the deciding vote against a Republican bill that would have repealed parts of the Affordable Care Act (and, more recently, he was one of the senators that scuttled the Graham-Cassidy healthcare bill). But even if McCain aligned himself — momentarily — with Democrats, Baker says the vote symbolized the pressure politicians feel to toe the party line.

“I had a conversation with [former Senate Majority Leader] Harry Reid, and he said: ‘I knew [McCain] was giving political cover for at least five Republicans who would have liked to have voted no,’” says Baker. “He was basically taking the bullet for them.”

While bipartisanship is struggling at the federal level, divisions haven’t deterred some state politicians from getting along.

At first glance, Alaska seems to be the poster child for a state that effectively manages a healthy balance of Republican and Democratic perspectives.

“While it is a Republican state, it’s difficult to fit it into traditional ideological boxes,” says Andrew Kitchenman, a political reporter for the Juneau-based public radio station KTOO.

And Alaskans backed up this bipartisan vibe at the ballot box. In 2014, they elected a governor on a unity ticket. Bill Walker, a Republican turned Independent, asked Democrat Byron Mallott to run for lieutenant governor on his ticket. They brought in 48 percent of the vote and unseated the Republican incumbent.

Even with the divisive partisan nature of American politics, there might be an unorthodox hope for bipartisanship: Donald Trump.

Trump has dipped his toe into both Republican and Democratic pools, switching party affiliation at least five times. And while he’s been especially critical of Democrats over the last two years, he hasn’t shied away from lambasting his own party.

3 Republicans and 48 Democrats let the American people down. As I said from the beginning, let ObamaCare implode, then deal. Watch!

“Donald Trump is really a party crasher,” Baker says. “There’s this old saying in American politics that you dance with the one who brung you to the dance. And he’s not. He’s ditching his date.”

Recently, Trump, a Republican, took meetings with Democratic Senate Leader Chuck Schumer and Democratic House Minority Leader Nancy Pelosi. But some have pointed out, Trump might just be pitting Democrats and Republicans against each other.

So how can politicians sincerely reach across the aisle? They might need to watch their words, in order to downplay partisanship. Baker recalls a conversation with a Democratic member of the house who realized that by using the term, “climate change,” he was irking Republicans. So instead, he talked about energy renewables.

While crafty, this seems a lot like tiptoeing around an issue. And if this is the best solution Congress has, it might be time to go back to the drawing board.​

A version of this story originally aired on Innovation Hub.