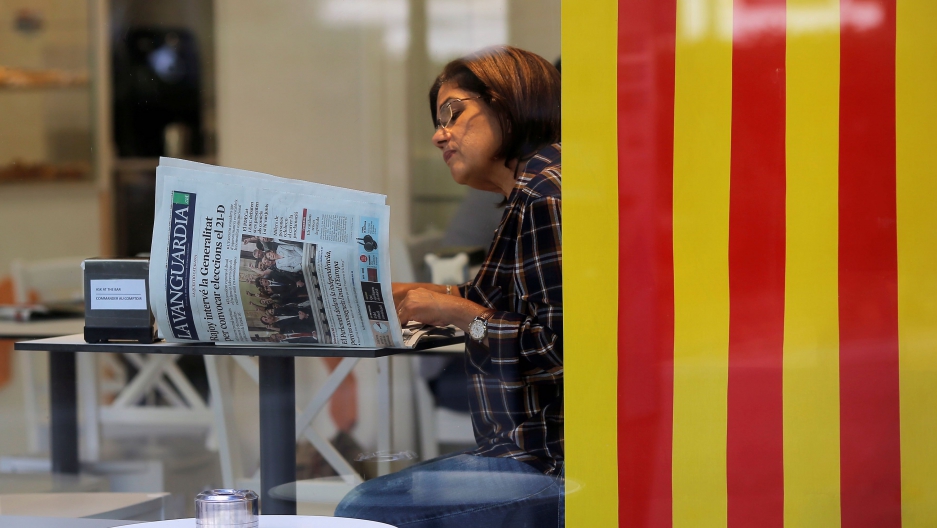 A woman reads a newspaper next to a Catalan flag at a coffee shop the day after the Catalan regional Parliament declared independence from Spain in Barcelona, Oct. 28, 2017.

Barcelona awoke on Saturday, Oct. 28, to gray skies and the usual stream of glassy-eyed tourists scuttling about on Segways. Locals sat at corner cafes, chatting conspiratorially over espressos, rolling cigarettes and leafing through the day’s papers. You’d have to peer closely at one of these to catch a headline pointing you to the fact that the day before, Catalonia’s President Carles Puigdemont had declared independence from Spain.

The news that blared out across social media, with tweets reading, “Welcome to the Catalan Republic” and “Good morning Republic,” seemed blind to another conflicting fact. Just hours after the proclamation, Spain revoked the region’s autonomy and imposed direct rule via a never-before-used constitutional provision known as Article 155. Spanish Prime Minister Mariano Rajoy has called for elections in Catalonia on Dec. 21.

Monday, the Candidatura d’Unitat Popular (Popular Unity Candidacy), or CUP — the separatist party that spearheaded the push for a binding referendum and subsequent unilateral declaration of independence — tweeted, “We will not condone the suspension of our rights or attacks on the popular will. We will continue to forge the #RepublicNow #No155.”

Both political entities and many others are encouraging Catalans to engage in acts of civil disobedience to carry out the “constitutional process” that would cement the republic. As the trending hashtag #FeministRepublic indicates, some of their key allies are women’s cooperatives and collectives.

“Disobedience is part of feminism’s DNA, and we will disobey 155 just like we’ve disobeyed so many other unjust laws and decrees throughout history,” Núria Alcaraz, a member of the Feminists for Independence collective who led the ANC’s Women Voting Yes campaign ahead of the Oct. 1 referendum, told me.

Feminism is one of the central pillars around which a new Catalan republic would be built, CUP proponents and many independence-minded feminists say. Practically speaking, feminist governance would mean having more women in office to make sure policy bears women in mind, such as prioritizing the elimination of gender violence and making sure women’s work isn’t relegated to home and child care.

“Article 155 will clearly have negative consequences for women,” Alcaraz says, citing the fact that Madrid has blocked subsidies to certain nonprofits — including women’s organizations — as one example. “Also, if there’s an increase in police violence, it will also be against women, repeating the use of sexual aggression as police practice.”

Several women reported being sexually assaulted by Spanish security forces during their crackdown on the Oct. 1 referendum, which saw nearly 900 people suffer injuries, according to Catalan authorities.

Marta Jorba, a member of the feminist collective, Gatamaula, agreed with Alcaraz. “As women, as feminists, we have a long history of disobeying laws we consider unjust. Like when abortion was illegal ... or before women could vote,” she said. “Women’s rights have been won by disobedience.”

“We have to see how much repression we’ll see and how we can resist and build the republic. We already have years’ worth of organization, social media campaigning, resistance and suggesting alternatives to the institutions in power.”

“The feminist struggle goes on just like it did yesterday and the day before that.”

This sense of feminist disobedience in the face of patriarchal injustice echoes many Catalans’ belief that they were justified in carrying out a purportedly illegal referendum and illegally declaring independence because, they say, the Spanish Constitution is inherently undemocratic. The 1978 Constitution — which returned democracy to the Iberian country after decades of authoritarian rule under Francisco Franco — does not grant autonomous regions the right to secede or vote for self-determination.

Steely determination aside, many feminists are worried about what lies ahead. Núria Francolí Sanglas, a sociologist and member of a local feminist cooperative, describes her feelings as a “cocktail of emotions.” “I’m happy and excited, and at the same time I’m a bit scared and worried,” she told me. “Knowing the fascist attitudes of the Spanish government, women’s rights could be weakened and the feminist movement is going to have to resist and fight back.”

Sanglas's, Alcaraz's and Jorba’s views do not represent a majority of Catalans, however, who do not want to separate from Spain, or at least not now or in this fashion. On Sunday, hundreds of thousands marched through Barcelona waving Spanish flags, clamoring for unity. Though 90 percent of participants voted for secession on Oct. 1, voters only represented a 43 percent turnout.

Spain’s state prosecutor is calling for Puigdemont and other high-ranking Catalan officials to be charged with rebellion, sedition and embezzlement, which could land them 30-year prison sentences. Puigdemont is currently in Brussels.

Meanwhile, the president of Catalonia’s Parliament, Carme Forcadell, is complying with Spain and on Monday, canceled Tuesday’s session. Likewise, the main pro-independence parties aside from the CUP — the Partido Demócrata Europeo Catalán (Catalan European Democratic Party), or PDeCAT, as well as the Esquerra Republicana de Catalunya (Republican Left of Catalonia), or ERC — on Monday said they would present themselves in the Dec. 21 elections.