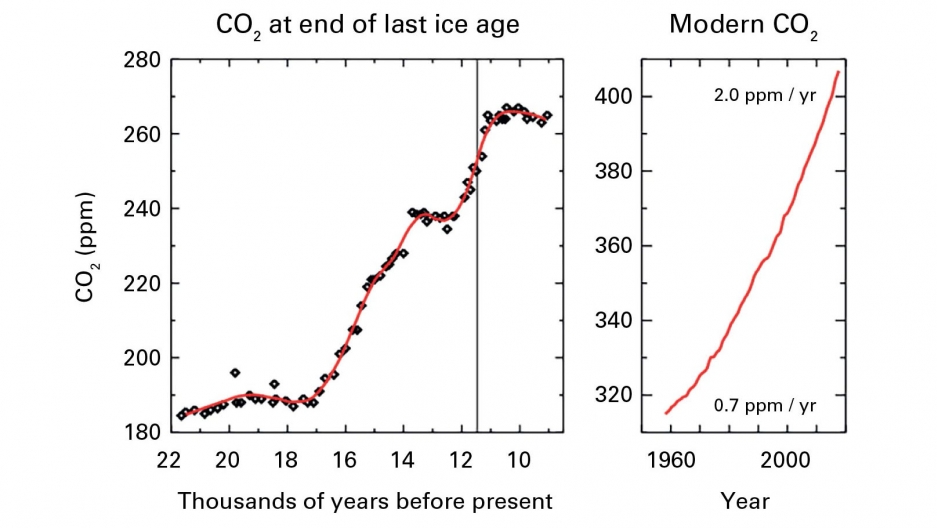 Global average CO2 concentrations rose at a record rate in 2016 to more than 403 parts per million up from 400.00 ppm in 2015, according to the World Meteorological Organization. Concentrations of CO2 are now nearly 50% higher than pre-industrial levels.

Carbon dioxide levels in the atmosphere hit a new record in 2016. The concentration of the heat-trapping gas is higher than it’s been in at least 800,000 years, including all of human history.

That's the word from the United Nations’ World Meteorological Organization.

The WMO says last year's CO2 spike was 50 percent greater than the average increase over the past decade, which Petteri Taalas, the organization’s secretary-general, says is very bad news.

“This is demonstrating that we are not moving in the right direction at all,” Taalas said at a news conference Monday from the WMO’s home base in Geneva, Switzerland. “We are actually moving in the wrong direction, and this all demonstrates that there is an urgent need to raise the ambition level of climate mitigation.”

In layperson’s terms, that means countries need to move a lot more quickly to cut carbon pollution than they've been doing in order to avoid the worst effects of climate change.

The latest CO2 numbers make the international goal of limiting warming to less than 2 degrees Celsius, established in the breakthrough 2015 Paris climate agreement, even harder to meet.

The latest WMO Greenhouse Gas Bulletin details a record increase in levels of CO2 in the atmosphere in 2016.

Taalas said it's not too late to hit that target, but time is running out.

"There is hope, but we have to change our behavior in the coming 10 to 20 years to be successful," Taalas said.

The WMO says the effects of human activities on the climate were made worse last year by a strong El Niño. That cyclical global weather event brought drought to much of the world and reduced the ability of plants and oceans to absorb carbon dioxide.

The two factors also combined to make last year the hottest year on record. And Taalas said those super-high temperatures aren't the only changes we're causing.

"We have changed the climate and we have seen not only warming, but we have seen changes in rainfall patterns, drought, flooding and ... the amount of the most intense tropical storms," Taalas said.

Representatives from virtually all the world's countries will meet in Germany next month to work on strengthening the Paris Agreement.

But under President Donald Trump the United States, which is the largest historic climate polluter, has said it will pull out of that agreement and is working to weaken its climate protection policies.