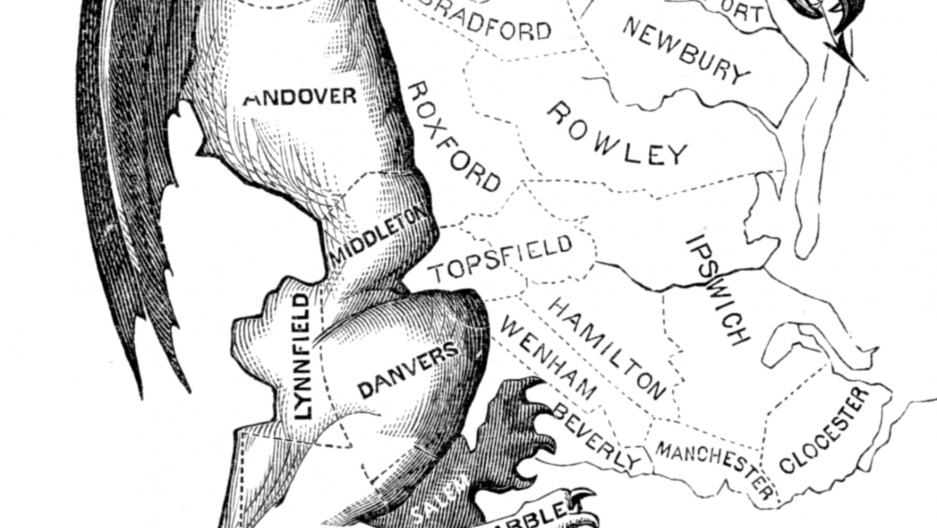 A political cartoon comments on an 1812 Massachusetts redistricting plan designed to keep the political party of Governor Elbridge Gerry in power.

American politicians are often compared to children. They finger-point, they’re stubborn and, at times, they can be downright manipulative.

According to Justin Levitt, a law professor and associate dean for research at Loyola Law School, this immature behavior comes out in full force when it comes to drawing boundaries for voting districts.

Levitt has written extensively about crafting electoral lines on his website All About Redistricting. He says that even though unfair redistricting can make the difference between voices being heard and voices being drowned out, politicians will often create these boundaries to best suit their own needs. But sometimes, when drawing questionable lines, lawmakers can get their hands caught in the cookie jar.

In particular, Levitt points to Texas, where federal judges recently found that Republicans redrew district lines that weakened the electoral power of minorities. However, in September, the US Supreme Court decided Texas does not have to immediately redraw its electoral districts until the justices come to a concrete decision.

And although the justices temporarily upheld Texas’ maps, this isn’t the first time state has run into trouble. Every 10 years, each state has to redraw their district lines, and every decade since the 1970s, at least one court has struck down Texas’ new districts.

“They haven’t gone through one cycle where it’s upheld by a court,” Levitt said.

But Texas Republicans aren’t the only ones who have made this power grab when given the opportunity. In the 1990s, Levitt says Texas Democrats engineered an “enormously effective gerrymander” to keep themselves in power, even as statewide tides were shifting. So, while the state was increasingly voting Republican, Levitt says Democrats still ended up with a disproportionately high number of seats.

Then, when Republicans started drawing the district lines in the 2000s, Levitt says they similarly gerrymandered districts to tamp down Democrats’ political prospects. Their defense? The classic “he did it first” argument, always popular on school playgrounds. And with every tit for tat, Levitt says the pendulum has swung even further.

“It’s been a breakdown of norms,” Levitt says. “Where conduct that we wouldn’t tolerate in any other legislation, legislators have tried, seen that they can get away with and said, ‘Let’s see if we can do some more.’ ... The kids have gotten pretty bold.”

So why don’t more people care that gerrymandering exists? Part of it is that there isn’t a one-size-fits-all solution to gerrymandering. Levitt says that even though states like California and Idaho both have independent commissions drawing congressional lines, the Idaho system wouldn’t work for California, and vice versa.

Then, Levitt says, a lot of people don’t tend to remember the effects of gerrymandering on national and state politics. But on a local level, things are different.

When it comes to school boards, for example, “people get it, they understand how important it is and people fight for it,” Levitt says. “If they spent that energy fighting for other units of political geography, which are just as important, it would go an awfully long way.”

Some states do fight. California got its independent commission because of a citizen ballot initiative. In Illinois, citizens pushed for a similar initiative, but the state Supreme Court decided against having a redistricting reform amendment on the ballot. Levitt says these pushes are extremely important to get states to a point where politics are fair and everyone is represented.

“Elections are the infrastructure of democracy,” Levitt says. “Most people don’t think about it most of the time ... until it breaks. The trick is to get people to realize how much they care before it breaks.”

A version of this story originally aired on Innovation Hub.