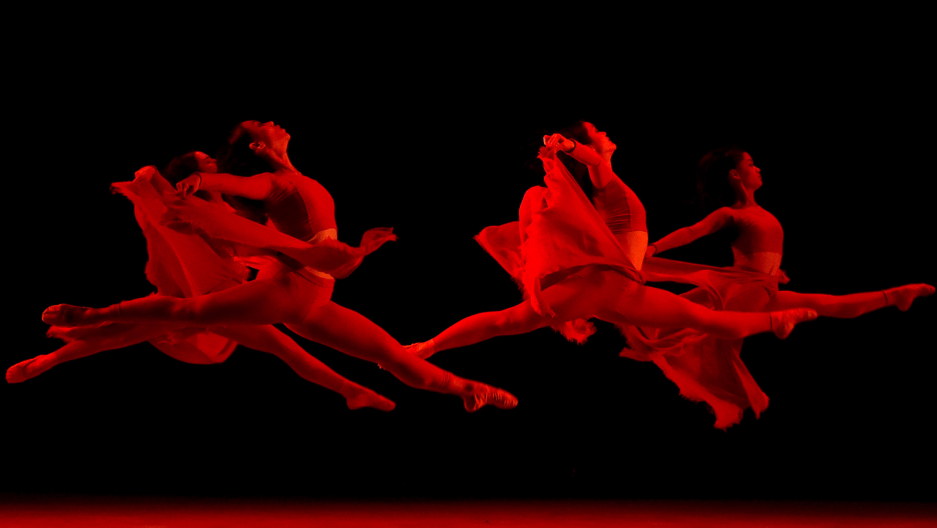 Choreographer Benjamin Millepied likes to push the bounds of ballet.

In a recent piece he created for the American Ballet Theatre, dancers appear in the lobby during intermission, swirling through the space usually reserved for audience members waiting for the next act.

"It does change this idea of ballet as behind this red curtain,” says Millepied. The French-born dancer-turned-choreographer has been on a mission to make ballet relevant — to bring it out from behind that red curtain — for years.

“What’s really important,” he says, “is to create strong experiences for people and to go against trend.” That’s particularly important in an age where short, eye-catching content is king, and more thoughtful work can take a back burner. “We’re living in a society of addiction, trying to create things people get addicted to and come back to,” he says.

Instead, to bring more people into ballet, Millepied says, “You have to adapt. You have to think about how to bring meaningful experiences. And that maybe is by going outside the theater and creating new venues. But ultimately, it's not about going in the direction of superficiality.”

But Millepied’s push for rethinking ballet has sometimes failed. In 2014, he went home to France and took over as head of the prestigious Paris Opera Ballet — the oldest ballet company in the world — to bring diversity and change to a company entrenched in tradition. When he arrived, he met roadblock after roadblock.

“One of the first things I said was like, ‘Well, I can’t run a company of 150 white dancers.’ And the response was, that’s what gives the company its strength.”

Not seeing eye-to-eye with the old guard of the ballet world, he left after just two seasons. “This idea that this company needs to be white ... that was a fight that actually I wasn’t going to win,” he recalls. He returned to the US to choreograph, and to build up his own contemporary ballet company, LA Dance Project.

Back in the American ballet world, issues of diversity and equality are front and center. Many have pointed to a lack of female choreographers and heads of major companies. Millepied says that’s a problem that’s specific to ballet. “There are amazing choreographers in contemporary dance. If ballet schools made that more part of their mission, I think more women would be choreographing. More women would be interested. You don’t become a composer by just being a musician … you study composition. Ballet is the only art form where suddenly someone wants to become a choreographer and they’ve got to figure it out on their own.”

But some loud voices in the ballet community are pushing conversations about gender equality in ballet in another direction.

Renowned choreographer and current artist-in-residence for the American Ballet, Alexei Ratmansky, fired up the debate with his Oct. 1 Facebook post in which he wrote that “there is no such thing as equality in ballet” and “I am very comfortable with that.”

Millepied does not agree with that view. “I think it’s diminishing and unfortunate.” But, he says, the choreographers who need to push for better representation of women in ballet are the ones who really have something to say. “Every filmmaker isn’t going to make a movie about the Latino community or homosexuality. Everybody has different things to say, and they should create things they relate to.”

And Millepied adopts that mentality for himself. His newest onstage piece, “I Feel the Earth Move,” was born of his impression that the world felt deeply uncertain. When he first began choreographing it, the Paris terror attacks of November 2015 had just occurred.

“The world doesn't feel safe,” he says. And now, two years later, that feeling of uncertainty has carried over to his adopted homeland of the US. “I Feel the Earth Move” is an allegory, he says, for this moment in time. But he was careful not to give the piece a narrative arc, instead hoping people will bring their own ideas to his choreography. “I prefer to … create situations that people will read in different ways.”

In the end, Millepied says approaching ballet with no preconceived notions is the best way to experience it, as with all art. “Stravinsky always said ‘I write my music for children and dogs. They understand it best.”